During the Recent Unpleasantness over the destruction of the Rosetta Stone project for Col. Allen West’s speech (and the shutdown of Vlad Tepes’ Vimeo channel), I referred to the removal of Vlad’s viral video from Youtube. The video in question was a shortened version of Col. West’s February 19 speech with English subtitles added. The original, longer video was recorded at the FDI event by Pamela Hall.

Vlad never understood why his version of the speech went viral. In order to get it under the ten-minute Youtube limit, he had to cut the introduction and the opening remarks from the front of. Col. West’s segment. But the original video was only nineteen minutes long, so there wasn’t that much difference in length. Perhaps the English subtitles were attractive to the hard of hearing, or to non-native English speakers.

In any case, Vlad’s shorter video peaked at about 75,000 views per day, with an amazing total of over 800,000 views before it was pulled. Kitman, who is a video wizard, kindly processed some traffic statistics for me, and the graph below shows the daily fluctuations of traffic on Vlad’s version of the video. The sudden drop on April 27 is a result of Ms. Hall’s request that Youtube remove the video: 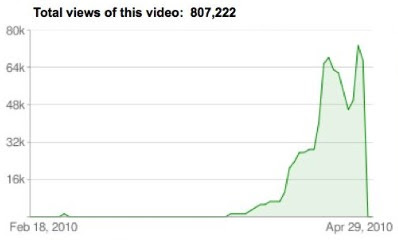 As you can see, for no identifiable reason, traffic on the video took off early in April, and then skyrocketed in the last couple of weeks before its demise.

Below is a cumulative traffic graph for Ms. Hall’s original video. This shows the total number of views during the same time period, increasing gradually to slightly over 8,000 at the point when Kitman took his snapshot. The points when the traffic increased — such as when the video was embedded at Politically Incorrect — can be seen where the graph bumps upwards more steeply at several points:

The final bump upwards, which added several hundred views to her total, occurs at the end, after Ms. Hall asked Youtube to remove Vlad’s version of the video.

To put the situation into perspective, using the data at hand (that is, a cumulative rather than a daily-traffic graph), I made an approximate comparative chart of the daily traffic of the two videos, overlaying the figures for the original video in red on top of the graph of Vlad’s traffic, using the same scale for both:
– – – – – – – – – 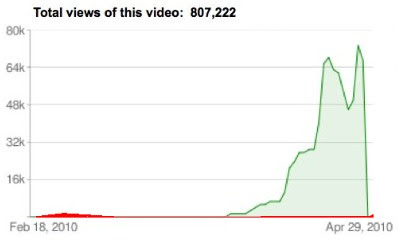 As you can see, the original video did not pick up the high level of traffic after the removal of the viral version. When Vlad’s video disappeared, the viral event was extinguished.

This illustrates an interesting and important characteristic of viral propagation: viral traffic is non-transferable. When the link that went viral becomes defunct, traffic that otherwise would have gone to it does not switch to some other version of the same video, image, or text. The wave simply fades out, and the viral phenomenon vanishes.

If Vlad’s video hadn’t been taken down, it would be closing in on a million views by now. It might even have passed that figure, given the overall accelerative trend it showed during the last several weeks of its existence.

Its absence is unfortunate, because Col. West’s message is one that all of us would like to see spread, virally or otherwise. There is little likelihood that any rerouted version of Col. West’s message will be seen by the same vast audience that was attracted, for some inexplicable reason, by Vlad’s version.

Copyright holders resent it when their work is being used improperly by others. It is unfair when their efforts receive insufficient recognition or acknowledgement. No one deserves to work hard for a good cause without being given credit.

During my career as a landscape painter and illustrator, I often experienced the use of my work without permission or credit. My personal rule back then — which remains in effect for the digital images I create for the Counterjihad — is this: As long as no one seeks to make a profit from my efforts, they are free to reproduce them.

For example, when I see “I’m a Fan of Disproportionate Response” displayed repeatedly on sidebars or as a personal avatar, it pleases me, even if no link to Gates of Vienna is attached to it.

My motto has always been: “Go ahead and take it; there’s plenty more where that came from.”