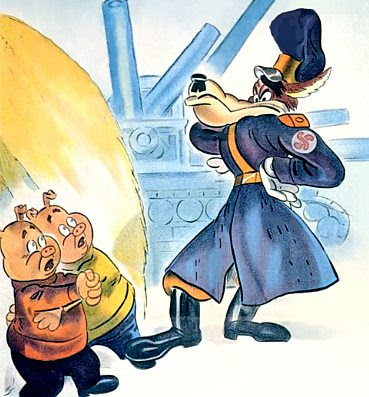 Dymphna and I have a local friend whose political views are congenial with ours. When discussing political matters, we never disagree on anything significant — except, that is, when the topic of Glenn Beck arises.

Back in March, Glenn Beck joined forces with certain of his better-credentialed colleagues — notably Charles Krauthammer and Bill Kristol — in condemning Geert Wilders. Mr. Wilders was cited as evidence of a renascent European “fascism”.

To refresh your memory, here’s a video of Glenn Beck’s sand-poundingly clueless epiphany about the European “far right”:

As you can see, Mr. Beck simply does not know what he is talking about. From time to time I’ve taken various Europeans to task for weighing in on the United States when they don’t understand it, but the reverse is also true. Americans can be as clueless about Europe as vice versa, and often more so.

Our friend wrote us to point out some particularly good points that Glenn Beck had made in a recent program, and to suggest that we might want to reconsider our negative opinion of him. Here’s what I wrote back to her:

Glenn Beck has said many things in the past that I have supported. You can find several videos of him our blog’s archives. He’s a little too weepy for me, but that’s just my personal taste. Up until a few months ago he was just fine with me.

However, he recently earned my disapproval for one major reason: he referred to Geert Wilders as a “fascist”. Since Geert is a leader in the struggle against the Jihad, and may be the next prime minister of the Netherlands, this lowers Glenn’s credibility in my eyes.

I am forced to draw one of three conclusions (or a combination of them):

As you see, any of these three reasons would be enough for me to discount Glenn Beck’s credentials as a commentator. You might say, “but Glenn is good on other things.” And so he is. But that doesn’t matter. It can’t possibly make up for the damage he did to our movement with his foolish words.

By dismissing the de facto political leader of the European Counterjihad as “fascist”, he in effect washed his hands of Europe, and has left the Europeans to the tender mercies of Islam.

If European nationalists are “fascists” and must be opposed, then there is no alternative to the Islamization of Europe, because the only groups and parties that resist Islam are nationalist in character.

Yes, it’s true that I view all this from a Eurocentric point of view. I’m very biased. My primary work is in the European Counterjihad networks, and I know firsthand that many of the people in them are selfless heroes of our times. It’s hard for me to see this from a detached perspective.

However, Glenn Beck’s little “anti-fascist” moment also makes me wonder about his stature as an American patriot. If it came down to it, and he had to resist the Mexican invasion on cultural terms — i.e., for what are commonly called “racist” reasons — would he be able to stand up to the inevitable smears? Or would he find himself speaking out against American “fascists” — those of us who believe that the incursion of alien cultures is bad for the country, and would destroy America if left unchecked?

Glenn’s capacity to think through an issue in any depth is thrown into question by all this. The shallowness of his understanding has been exposed.

I have been forced to consign him to the same ash heap as O’Reilly and many others — full of sound and fury, but signifying nothing.

America has a political type that may be unique: the conservative multiculturalist. This peculiar animal advocates small government, low taxes, the right to bear arms, and enhanced personal liberty. But he also believes that open borders are generally beneficial, and that America is better off for having a massive influx of foreigners from totally alien races and cultures.

It may well be that Glenn Beck arrives at his charges of “fascism” by means of this PC conservative perspective. This is a position that I staunchly oppose.

If the time should ever come when he has to choose between the feel-good “rainbow” version of conservatism and the tougher, meaner kind, which will he choose?

Will he opt to defend traditional American culture against those who would destroy it?

Or will he reject that position as “fascism”, and decide to celebrate diversity along with his colleagues on the Left?