A new movie about Robin Hood and the Crusades was recently released. Elan-tima (who comments occasionally here at Gates of Vienna) has spared me the trouble of seeing it by sending this brief review with his permission to post it: 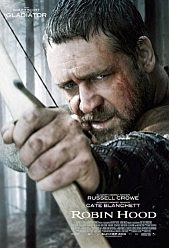 As a regular reader of Gates of Vienna I thought I’d write to you about the new Ridley Scott shclockbuster Robin Hood, which stars Russell Crowe.

Please make your readers aware that not surprisingly Mr. Scott has for the second time showed his dhimmitude by attempting to distort history and also by steering the blame and brutality of the Crusades squarely onto the heads of those Euro-trash from days of old.

In the opening of the movie it is written that Richard the Lionheart’s action in what was called the Holy Land is referred to as “his” crusade. As if it were the whim of one glory-hungry, misguided monarch willing to bankrupt England for a wrong cause (a not-so-subtle poke at the current adventures in the Middle East).

Then comes scene where Russell Crowe speaks of a massacre of thousands of Muslims by the Christian invaders, and describes how an old Muslim lady looked into the eyes of Robin Longstride “not with fear or anger, but with pity”. After hearing this, King Richard dismisses Robin’s statement as naïve, and then punishes Robin (Crowe) by putting him and others in the docks. The figurative finger of shame is overtly pointed again at the guilty Englishmen.

It’s obvious that Mr. Scott is a chronic apologizer for Europe’s “sins” against the noble Religion of Peace, and it sours the rest of the movie. I suggest that everyone at Gates of Vienna spread the word about this big screen propaganda exercise.