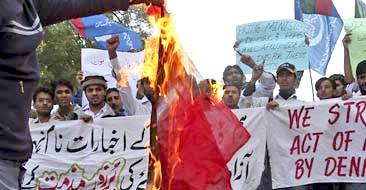 The prominent ethicist Jack Marshall has posted a response at Public Square to the rebuttal I published late last night (earlier posts are here and here). The “debate” ended at noon today; thus my final statement was composed in haste. I had no time to address Mr. Marshall’s points in detail, so I will include his entire response at the bottom of this post.

Here’s my final word on the topic. I’ll add the permalink when it becomes available.

Mr. Marshall has published another riposte (“When Lacking An Argument, Argue Semantics”) in this “debate”. His post is, once again, replete with loaded terms and unexamined premises. It concludes with, “I repeat: this conduct doesn’t protect free speech; it defiles it.”

I have run out of time — this exchange of views closes at 12 noon EDT — so I am unable to refute my opponent’s points in any detail, if indeed they are refutable. Mr. Marshall has picked out a few of my earlier questions and provided answers; I recommend that readers read his full post and sort out his arguments for themselves.

I’m disappointed in the process of this exchange here at Public Square. I had mistakenly assumed that we would be conducting a real debate, following the basic rules of civil discourse and logical demonstration. Such rules would preclude loaded terminology, name-calling, ad hominem attacks, and the various logical fallacies which obscure rather than enhance understanding.

An effective debate should at least offer the possibility that someone in the audience might be convinced by one participant or the other to change his viewpoint. The goal, at least for me, is that someone who hears my arguments might say, “You know, this Bodissey fellow makes sense. I never thought about this issue that way before. I’ll take a closer look at it.”

This is the best result a debater could hope for.

In contrast, imagine that I enter the debating hall, describe my opponent as a baboon, point at him and declare that he is a coward, and state that his ideas are not only wrong, they are evil and dangerous. I will gain the plaudits of my friends and feel satisfied that I have “cleaned that ruffian’s clock”. But not a single member of the audience will be convinced to change his viewpoint by my invective. And that, to me, makes such a “debate” valueless.

I’m part of a movement that has a tough uphill struggle against the combined forces of the current political establishment and ruthless Islamic supremacism. The wind is against us, and my only hope of success is to attempt to change the world very slowly, one mind at a time.

This goal requires me to be calm and civil. It necessitates careful research, thoughtful analysis, and the unpleasant duty to admit promptly any factual mistakes I might make. I’m obliged to assume the good faith of the people I debate, to accept their basic decency, and to agree to disagree if I fail to convince them.

Such a process was not possible under the conditions that reigned here for the past thirty-six hours. Attempting to conduct a real debate absorbed huge amounts of my time, to no discernable effect.

The exchange was not worthy of Public Square. Its motto is “Common Ground, Uncommon Debate”, but I found neither in this venue. There was no discernable attempt to find common ground, and the debate was as common as dirt: name-calling, mind-reading, subject-changing, and strawmen — the usual techniques employed by leftist polemicists in all their online habitats.

By the way, for the information of our readers: Jack Marshall isn’t an ethicist, he’s an attorney.

Well, I didn’t anticipate a filibuster, and such a pedantic and looong one!

We don’t need to go into the endless, centuries-old debate about what is “wrong,” because “Everybody be Uncivil to No Good End Day” is an easy, easy call. We’ll assume that the only ethical argument for the rightness of the stunt is based on utilitarianism…the ethical system, championed by John Stuart Mill, that allows a balancing process: if the good results outweigh the bad, if more people benefit than are harmed, then a particular act may be ethical. Usually you need to add a little Absolutism to the mix: using human beings as a means to an end is still wrong, even if the results are beneficial to more people than not. Then you apply your basic values. Non-ethical considerations—greed, anger, vengeance, self-glorification—are not ethical reasons or objectives. Ethical values, like fairness, respect, citizenship, caring, are good motives and objectives. Good results will not justify an unethical act, but the goal of virtuous results is necessary in judging whether a utilitarian-based action can be justified.

I mention the lack of positive results only because it was completely predictable, and EDMD (if I may abbreviate) always was a formula to do more harm than good. Some of the organizers undoubtedly believed, naively, that this was not the case. They were not necessarily, in that case, being unethical. Perhaps they were just wrong, as in “incorrect.” Still, setting out to be intentionally insulting to millions of people should require a high level of certainty that the results outbalance the harm. They don’t, they can’t and they didn’t.

Baron’s argument goes far afield from First Amendment grand-standing: now he questions the legitimacy of the Islam religion. That apparently justifies gratuitously insulting an entire faith. I don’t see the logic. Civility is one of the foundations of ethics: it demonstrates mutual respect. Defying civility—and resorting to offensive imagery is just that—makes dialogue impossible, feeds resentment, and abandons rational discourse. (Although if “rational discourse” is going to be pedantic double-talk like the Baron’s last post, I’ll take the pictures, thanks.) I think my favorite piece of sophistry is this sentence:

“We have chosen to engage in a behavior which we realize may insult Muslims. But being insulted by a cartoon is their choice, not ours.”

Baron’s rebuttal is nothing but a stream of footnotes and lazy qualifications lacking any central argument. Nobody’s “begging the question”:

“Does EDMD in any way address the issue of radical jihadists trying to control free expression in the U.S?

“Is there any special risk involved in drawing Muhammad under these circumstances?”

“Does it insult Muslims who had no part in this controversy?”

“In the absence of any tangible benefits fro EDMD, can this be justified?”

“Does that make the exercise gratuitously hurtful and uncivil and thus violative of the basic ethical values of caring, fairness, respect, civility, responsibility, prudence, proportion, empathy, and conscienciousness [sic]?”

CAN everyone draw Muhammad?

Sure. And we all knew that.

Meanwhile, this kind of game-playing….

“Dubious” is another one of those pesky undefined terms. Please define “dubious” in this context.

…is familiar to me as the language of obfuscation and intentional obtuseness. What are the scare quotes doing around “dubious”? It’s not undefined in the least. It means “doubtful,” and I was being kind. Getting Comedy Central to do what it should have done in the first place rectifies the initial harm. A threatening e-mail or blog post that has no effect is nothing. The logic behind EDMD, on the other hand, is no logic at all. “South Park” was intended as humor to non-Muslim audiences, not as an insult to Muslims. EDMD, in contrast, is an intentional insult, which validates the jihadist’s complaint, and sets up a false stand of defiance—a manufactured defiance in a situation created just to be defiant.

It is wrong—mean, cruel, rude, uncivil, disrespectful—to organize a large group of people to run through the nation’s public squares screaming “sh—” because some jerk got in trouble doing it in Toledo. It is wrong—do I really have to explain that?—to organize women in a mass breast-baring in elementary schools and libraries to protest Janet Jackson and CBS getting in trouble with the FCC at the Superbowl. It is wrong to burn flags in front of thousands of veterans’ houses to make the point that it’s protected speech. If those anti-gay wackos who disrupt the funerals of Iraq War casualties get shut down, it would be wrong—unjust, unfair, cruel—to organize disruptions of thousands of funerals to show that it’s protected speech.

This isn’t rocket science. When an act hurts people out of all proportion to any tangible good it can or will accomplish, it’s unethical. Cultural sensitivity simply means mutual respect and civility. Opposing that is indefensible. Exercising First Amendment rights without any concern for others, or decorum, or consequences to third parties, is irresponsible, and an invitation to censor to try to limit speech. The government shouldn’t exercise discretion—speakers should. Everything that can be expressed doesn’t have to be expressed, and using speech wisely is essential to civilization.

I repeat: this conduct doesn’t protect free speech; it defiles it.

6 thoughts on “Common as Dirt”