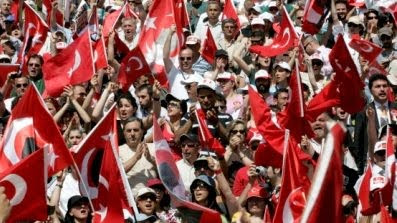 Today we return to the Islamization of Germany via its Turkish fifth column. Many thanks to Kitman for finding and translating an open letter from a Muslim in Germany warning about the Muslim Brotherhood’s well-planned and patient infiltration of German society. The letter originally appeared on a website in 1999, and was recently reposted as a comment on an article in the newspaper Rheinische Post. Politically Incorrect News ran across it and posted it here.

The letter was presumably written by a Muslim insider, but some people have doubts due to the good German in which is was written. I tend to believe that the corrections were made by a German editor of the Christian magazine Christliche Mitte.

And his translation of the letter:

Open letter from a Muslim

I am a Muslim and I know what I am talking about!

I was the chairman of two Islamic societies, both now dissolved. Due to my knowledge of Muslim politics and languages I was able to gain access to the parts of Islamic society which are sealed off to Europeans.

I have been a keen observer of the Islamic movement in Germany since 1968, back when no Muslim thought about building mosques or having dual citizenship.

CM rightly states that we are now facing an unprecedented number of mosques and construction plans for future mosques. This, evidently, is not a coincidence.

The stealth occupation of German and European cities by the Muslim Brotherhood and the World Islamic Congress is taking shape steadily and in spite of all rivalries. This is the main objective of every Muslim organisation in Germany. Make no mistake about this.

The already-existing mosques and centers of Islamic societies in Germany reach well beyond the purpose of religious practice and education. They are secretly dedicated to the training of a large number of Turk military reservists within the already-established secret army of Islam.

Young Turks from fundamentalist families who have fulfilled their military service are brought into Germany by the IGMG (The Islamic Society of Millî Görüş).

Germany was chosen as the center for these initiatives because it has the greatest percentage of Turkish residents, but also because everything that even smells like immigrant hostility is banned and ostracised, and every warning, however justified, is repudiated as hatred towards foreigners, providing ideal cover for the activities of Muslim fundamentalists.

I am well aware of the mindset of all Islamic groups within Germany. We were a small group of German Muslims who fell prey to the erroneous belief that we could somehow eliminate a considerable number of the Christian-haters from the circle of fanatic believers, but this is not possible. Even the most ordinary Muslim feels superior to all Christian Europeans. Do not expect this to change into any loving sentiments. You would be fooling yourself. It is simply not going to happen.

With the gratification of this demand the Islamists have successfully completed an important step towards the realisation of their plans for a European takeover, because if a large number of the above-mentioned Turks were ever to exceed the limits of German tolerance, they would always have the option of invoking their Turkish citizenship to avoid unpleasant consequences.

What is impossible even in Turkey is happening in Germany, aided by government institutions: the construction of a secret army of Islamic fundamentalists by the Muslim Brotherhood. And behind them stands the IKHWAN al MUSLIMIN with a headquarters in Pakistan and the RABITA al ISLAMI operating from Mecca. Both of these organisations are funded by rich oil-states.

The recent hysteria concerning “hatred of foreigners” caused by the awful killing of defenceless women and children of Turkish origin plays right into the hands of Islamists and enables them to pursue and expand their covert activities uninterrupted. Every objection to their undertakings is effectively silenced by accusations of immigrant hostility and incitement of hatred.

Add to this the fact that many Christians are actively promoting the rise of Islam in the false belief that this might spare them as targets of persecution if the aspirations of fundamentalist Islam someday proved victorious.

But everybody should know that there is no dialogue with Islamists; there is only subservience to the fundamentalists. These people know no gratitude or appreciation with regard to services rendered. They only know the ruthless pursuit of power.

In recent times the personal relationships between Germans and Turks have become noticeably cold and distant. Internal communications within the IGMG of Cologne recommend segregating ourselves from Christians. Not only that, but assaults on Turks are even welcomed in order to provoke the well-meaning German authorities into fighting “hostility towards immigrants,” in effect making it possible to condemn any defensive efforts as incitement of hatred.

A few statements by IGMG reveal their agenda: “Down with all political systems except Islamic rule! The Power belongs to Allah, his messenger, and the believers. We will crush the skull of anyone who opposes Sharia.”

These are statements of the IGMG against the German society hosting them! Some people might accuse me of overdramatising the situation, but I have been following these developments with ever-growing horror for years as an insider.

I feel inclined to warn against a development within German society which, if not stopped in due time, could become an all-encompassing disaster for all Europeans. And by this coming disaster I mean the subjugation of the Europeans under the dictates of Islamic fanaticism.

The expansion of fundamentalist Islam is promoted by the Germans themselves. Just think about all of the building permits granted for the construction of mosques. Almost every week a new mosque is opened.

Consider the support for Christian-Islamic dialogue through churches and clerical publications.

Let me tell you, as a knowledgeable Muslim who was able to move around in Islamic circles closed to all Christians: there is no Christian-Islamic dialogue!

From an Islamic point of view there can be no dialogue founded on mutual understanding. There is only submission. And according to authoritative Islamic teachings, all non-Muslims must submit to Islam.

What most people fail to recognise with regard to all the buzz surrounding Christian-Islamic dialogue is the inherent objective, namely, the weakening of Christianity. Do not believe any ruling politician who claims to be unaware of this.

These politicians elected by well-meaning Christians betray their own electorate. They allow the oppression of their own religion in their own country. And this is done in spite of clear biblical warnings: “Receive a stranger into thine house, and he will disturb thee, and turn thee out of thine own.” [Ecclesiasticus 11:34, King James Bible]

How shameful having to be told this by a Muslim. But I am a German Muslim, and I have to stand up against the deceptions and fairytales imposed upon otherwise clear-minded German citizens.

The Germans harbour no hostility towards foreigners. This false meme is propagated in order to silence criticism and hide the subversive activities of Muslim fanatics against Germany.

The politicians will not receive any gratitude for their multicultural sympathies. All they achieve is the advancement of powers hostile towards Christians and Germans, thus encouraging even more outrageous insults directed against German citizens.

The German politicians should be made aware of the fact that foreign Muslims are laughing scornfully at the “stupid German man.”

All who suffer from the delusion that embracing a multicultural society will somehow spare them the future consequences need to reconsider that stance. They are going to experience the same subjugation and oppression as every other non-Muslims, because fanatical Muslims are egoistical and recognize nobody as their equal.

24 thoughts on “Power Belongs to Allah!”