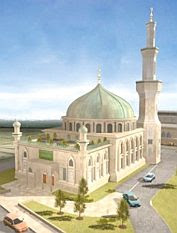 On Saturday 3rd April the EDL went to Dudley in the centre of the Britain, where the opinions of 22,000 local people were ignored by the central government, and a new Mega Mosque is to be built. The supporters of this mosque claim that the £18 million required to build it has come from local donations, but critics of it say that would mean that £50,000 was donated for every Muslim in Dudley. This just does not add up. So just like the EDL supported Geert Wilders’ visit to the UK four weeks ago, this week we went to Dudley.

I have been to the English Defence League demos in London, Bolton, and Dudley, and I’m a member of the EDL gay division (LGBT division). Before Geert Wilders’ visit to London, I had not been to any EDL demos. I wasn’t sure myself if the EDL was truly supportive of gay rights when I joined, but I knew I had to find some counter-jihad group to support. The EDL LGBT division was only set up after the Wilders/Free Speech demo in London.

On doing my own research I found statements and photos going back to September 2009 showing that EDL supported gay people against sharia. This support from the EDL for people like me, when there was no overt support for the EDL amongst the gay community, has fired my involvement. One month later there are over a hundred members of the LGBT division. It turned out there were many lesbian and gay people who were supporting EDL, they just weren’t organized as one identifiable group.

The EDL is the only group in the UK that is taking action to defend gay people from the threats of execution coming from the “sharia judges” in the UK. I’m proud to say I’ve never met a group of more dedicated, intelligent and patriotic people. It is no surprise that Islamists and the so-called Unite Against Fascism (UAF) communists are running scared. Of course, the media are determined to show only a narrow view of the people who support EDL, and have never reported what EDL stand for. Many more gay people are opposed to the Islamization of the UK, but are wary of a demo where there might be violence — I’m convinced the media try to portray EDL as violent in an attempt to scare people away. I really am a stereotypical urban homo, and I’ve never been in a fight. Yet I’ve never felt remotely threatened on an EDL demo. More gay people and more moderate Muslims are welcome in the EDL.

Most of the gay division travelled up with ordinary working-class men and women from outside London. The middle-class intellectuals in the UK (a group of which I consider myself a member) have almost totally failed to oppose Islamization. The EDL people were well-informed, motivated and welcoming. As the EDL convoy drove through the outskirts of Dudley it was heart-warming to see individual shoppers put down their bags to applaud us, and to see motorists get out of their cars to cheer us on.

Once we got to Dudley, the EDL were marshalled by the police along two lanes of a four-lane road. There were police vans down one side, and police officers down the other. We were left standing there for at least ninety minutes. When we moved in to the demo location, we had police on both sides of cages. The entire car park where we were to hold the demo was hidden from view, as was the road the demo went up to get there. Either the establishment wanted to keep the local population believing the deceit that the EDL is only a group of tough football supporters. Or the establishment wanted to make sure the local Muslims could not throw bricks at this peaceful counter-jihad demonstration.

The demo location was surrounded by a metal cage, and the police were surrounding that. Very heavy-handed tactics from the police. We weren’t even allowed to take flags or banners that had any sticks in them. From demonstration to demonstration, the police seem to make up the rules as they go along (flags and banners were fine at London and Bolton).

The demo was at least twice the size of the Bolton demo two weeks earlier. It’s hard for me to judge the number of people, but let’s say it was 4,000 (most estimates put the Bolton demo at 2,000). You can get some sense of the size of it if you watch this eight-minute video recording of the arrival into the demo cage:


There were elderly people there, people with kids, Asian people (Sikhs, Hindus, ex-Muslims). The LGBT division was proud to be there, and with a gay anarchist who had a lot of experience on anti-globalization demos across Europe. He recognized a woman at the demo — four weeks ago she had been standing against the EDL on the London demo. It finally seems as though the message is getting through to the liberal/left and to feminists that the EDL is their future, not any organization that supports Islam. However, the UAF are themselves resorting to racist attacks on any black or Asian people who support the EDL. If it weren’t for the fact that George Orwell is dead, I’d be phoning him up and telling him it’s time he wrote a book about Newspeak.

The EDL is a young organization (not even a year old), and this time they had the platform and sound system sorted out. A wide variety of people gave counter-jihad speeches: a Sikh man who is high up in the EDL, a black man with very cool dreadlocks, and even a twelve-year-old Russian girl gave a speech about the threat of Islam in Russia. One of the best speeches was by Snowy Nesbit.

Atlas Shrugs and ICLA have some photos of the demo.

However, there was trouble within the caged demo. The people causing the trouble were not part of the main EDL group. They were either angry undisciplined locals or infiltrators. Talk of infiltrators sounds very grand, but after the first incident I spoke to one elderly man who has been in the counter-jihad movement for a long time. He said that the core football casuals like him (violent hooligans who came together solely to oppose radical Islam) were aware of infiltration attempts within their organization. He said his organization could resist this infiltration because they had lines of community trust within football team supporters that go back years. He did not know what EDL could do to be an open movement and keep troublemakers out.

There were three incidents, two occurring during the demo, and one at the end. Whilst we were shocked to see these, it’s important to keep things in perspective: whilst we were in Dudley Saturday, there was a riot at a clothing shop in London involving 2,000 people, and by all accounts the violence was much worse than at this counter-jihad demo!

During the main demo there were some people who tried to get out of the cages at two opposite sides. The first group consisted of about eight or ten men, and when a steward ran over and remonstrated, they stopped. Later at the opposite side of the cage a much bigger group ran away from the main crowd who were gathered round the stage listening to the speakers. The speakers saw this fracas, and interrupted their speeches to shout at the rowdy element “we are here for a peaceful protest — if you want violence, then we don’t want you”. Then the main crowd started shouting “wankers, wankers” at the troublemakers, and upon seeing that the majority were opposed to what they were doing, the troublemakers stopped trying to get out of the cage.

So, the two incidents I saw of troublemaking within the demo were easily controlled by the EDL core team, and the main group of supporters. It appears there were other incidents of violence, one involving a steward who was attacked. At the moment it is hard to get details of this, and I didn’t witness it personally, so I can’t add anything. It also appears that the night before the demo the local police force arrested Muslims from the area who were caught secreting weapons in the vicinity of the demo.

What makes me think the last group of troublemakers were locals is that at the end, as the police were (feebly) “marshalling” us out of the demo, the people who pushed down the cages ran off into the town, whilst the rest of the EDL were following police instructions. EDL clothing was not seen amongst this group of running troublemakers (except for 1 man), so they clearly were not core members of the EDL and were not being led by EDL. I can state all this with authority, as the gay group were among the last to leave the demo area, and we were standing no more than two metres away from the people breaking out of the cage.

The thing I find very strange about this breakout at the end, is that the police had been marching us into the demo and surrounded us with a wall of bodies on both sides. And during the demo they had a ring of police around us (when the cage-breaking attempts started within the demo, the riot police surrounded the demo). It was all very heavy policing, until the end as the protestors left the demo site.

When this breakout occurred at the end there were no police within a hundred metres. And while we were shouting at the troublemakers to stop breaking down the fencing, the police did not even appear. After the breakout occurred, the police let the troublemakers run towards the town, and riot police surrounded the peaceful EDL group who had tried to stop the breakout. The way they managed the end of the demo was totally unlike anything else we’d seen on that day (and totally unlike the way the London and Bolton demos were policed).

I certainly hold the police responsible for their failure to control the end of the demo. I do not blame the EDL leadership or the main core of support. On our way back from the demo, we were all saying we hoped there would be no trouble in Dudley that night. And we were coming up with ideas to have even greater crowd control within the demos. We have learned we cannot rely on the police to maintain order. Several stewards have since commented that when they asked the police to remove troublemakers from the demo, the police refused to help.

If these troublemakers were angry undisciplined locals, then it’s a warning of what the future holds for the UK. If it was infiltration, then the EDL need to try to address it. I do know that some measures are being considered to try to prevent such infiltration from happening.

Many in the EDL were disappointed by this violence. But I think we have to take heart from the fact that twice we did manage to control this group bent on troublemaking, and in the third incident it would have been impossible for us as a group to manage the troublemakers. If people like Anjem Choudary are right, and the UK is heading for civil war, then the EDL is all the more necessary. We have to make politicians sit up and take notice before it is too late. People all around the country have had enough of Islamization.

2 thoughts on “Opposing the Mega Mosque in Dudley”