“There is no ‘moderate’ Islam… The Al-Hijrah may be the end of Western Civilization.”

A few weeks ago a woman emailed me and explained that she had woken up to the danger of the Great Jihad, but others hadn’t. She said:

Now I’m aware of the threat, I’m trying to “wake up” friends and family, but it’s proving extremely difficult. Everyone is so completely paralyzed by political correctness and trained not to look beyond the mainstream media headlines that they’ve lost all desire to know — it’s almost as if they’re too frightened of the truth.

People I’ve spoken to seem to have the usual “defense mechanisms” in place: Islam is “just another religion” and therefore must be peaceful; Islam has been hijacked and given a bad name by a handful of extremists, etc., etc.

Unfortunately, I don’t know enough about the practicalities of this to be able to explain it to people, so I was wondering if you had any suggestions?

I wrote her back, and we exchanged emails discussing various aspects of the Counterjihad struggle, and how we might break through the barriers to people who have no idea of the danger they face.

As of tonight I can recommend an excellent introductory tool for raising awareness of the threat of Islamization. It’s a fifty-minute film entitled Islam Rising: Geert Wilders’ Warning to the West, and was produced by PRB Films and the Christian Action Network. The film opens tomorrow in Washington D.C.

I’ve known Martin Mawyer, the president of CAN, for about four years. You’ll never find a more dedicated Counterjihad activist than Marty.

His organization is based in Lynchburg, Virginia, not far from two of the compounds of the terror group Jamaat al-Fuqra (check our sidebar for all the Jamaat ul-Fuqra links). Marty and his associate Jason Campbell personally investigated, visited, and overflew a number of Jamaat ul-Fuqra camps up and down the Eastern Seaboard. They even discovered one that had been previously unknown to the FBI, as chronicled in their earlier movie, Homegrown Jihad. 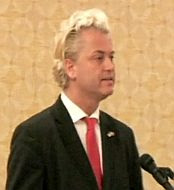 These guys have real guts.

Marty was kind enough to send me an advance DVD of Islam Rising. The movie centers on Geert Wilders, and includes the entirety of Fitna, the video that caused Mr. Wilders to be prosecuted for “hate speech” in the Netherlands. A major portion of Mr. Wilders’ speech from last year in Boca Raton is featured, accompanied by various video clips and still photos of the worldwide Jihad.

As the billboard for Islam Rising says: “You have been warned.”

Tomorrow, May 1, the movie premieres on Capitol Hill as part of “May Day 2010: A Cry to God for a Nation in Distress.” According to the official invitation:

The high-profile event brings Christians from all walks of life together to pray for God’s blessing upon the United States.

The “May Day 2010” is expected to draw in 15,000 Christians of all denominations to Washington, D.C. on Saturday, May 1, 2010. The morning begins in front of the Lincoln Memorial for a day of prayer, speakers, and worship music.

If you’re interested in the movie, you can order it at CAN or on the Islam Rising Website. I recommend it as an “Introduction to Jihad” course for any friends and family who don’t yet get it.

Once they’ve seen it, they can’t say they haven’t been warned.