Theophilus Eugene “Bull” Connor (1897-1973) was the Public Safety Commissioner of Birmingham, Alabama, during the civil rights struggles of the early 1960s, and his use of dogs and fire hoses against protesters made him an icon of American bigotry, particularly in the South.

Adolf “Der Fuehrer” Hitler (1889-1945) was the National Socialist leader of Germany prior to and during the Second World War, and his systematic attempt to exterminate European Jewry made him an icon of European racism. 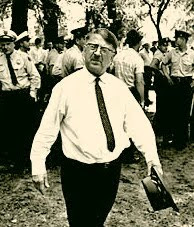 For the past fifty years these two villains have been collaborating and have now merged into a single malign entity in the collective consciousness of the transatlantic West. Hitler represents the European branch of our common delusion, and stands ready confront the slightest resurgence of nationalist sentiment in any European polity. “Bull” stands ready to unleash the dogs of “racism” against guilty white Americans whenever they dare to question current racial paradigms. Together these two ghosts control the common political discourse in the West, supporting dogma that cannot be questioned and anathematizing any ideas that might run counter to it.

The modern multicultural regime is a continuous séance designed to summon the shade of “Bull” Connor and call down a revenant Adolf Hitler to strike fear into the hearts of the citizenry. The firehoses and the storm troopers await the first sign of deviation from politically correct orthodoxy. With his jackboots and whip, “Bull” Hitler keeps the masses in thrall, exterminating any sign of “racism” as soon as it appears.

How is it that we find ourselves in such an absurd situation? How can millions of supposedly intelligent people fall prey to such manifest nonsense?

It’s occasionally useful to step back from all the tumult and shouting and take a look at the meta-arguments that underlie heated political discussion. The raging conflict of our time is between politically correct Multiculturalism and other, saner ways of looking at the world.

But what are the deeper reasons behind all that bitterness and self-righteous invective? From what source does “Bull” Hitler derive his anti-racist mojo?

There are two different and apparently contradictory premises underlying PC ideology. In their simplest formulations, they are:

We’re nice, and They’re not.

These premises are held as subliminal ideations. If they were to become fully conscious, their inherent dissonance would be apparent, and they would lose their effectiveness. Like the Morlocks’ machinery, they must remain deep underground if they are to continue to feed the innocent and doomed Eloi in their idyllic paradise.

“We” means the denizens of the West, the heirs of Western Civilization. It refers mainly to Caucasian members of the European diaspora, although other groups that have fully assimilated Western ways may become honorary members. Jews and Israelis are often included in “Us”, but not always.

“They” are everybody else in the world, with some exceptions and ambiguities. Africans, American Indians, Sumatrans, Eskimos, and Arabs all qualify as “Them”. Russians and Japanese don’t quite fit the schema, and have to be pushed to one side for it to work.

Now down to the details.

We believe that our ways are so beneficial and appealing that they will adopt them. They are hidebound and resistant, so they don’t.

We’re tolerant, and they’re intolerant. So we allow them to continue their hidebound, backward, anti-Western customs, because what else can we do? We’re nice and they’re not, so we can’t expect them to cotton to us. All we can do is hope — in our reflexively well-meaning, tolerant way — that if they hang around us long enough, somehow our nice ways will rub off onto them, and they, or their children, or their children’s children’s children will become nice, too.

We are large-hearted and generous, and they are tribal and mean-spirited. We offer them all the benefits that a modern Western democracy can generate, paid for by nice hard-working taxpayers. They take all they can get, expecting it as their due, and then demand more, filing claims if their demands aren’t met, with the help of nice lawyers provided for them, once again, at the expense of those ubiquitous nice taxpayers.

We’re so nice that we even allow criminals, the unemployable, and terrorists to settle in our countries. They turn out not to be nice when they get here, but they might suffer if we send them home, so we kindly allow them to stay here. Not only that, we allow them to import their extended families to keep them company, in hopes that this will make them feel better so that they will act more nicely towards us in their gratitude.

We’re generous in our expectations of these newcomers, lowering the bar so their children are not stigmatized by performing badly in our schools, allowing them to retain their own languages so they don’t face the daunting task of learning a foreign tongue. When their children form themselves into violent predatory gangs that terrorize our own children, why, that is just one of the trials that nice people have to endure at the hands of those who are not nice.

When these not-nice children grow up and disproportionately occupy our prison cells, we nice people assume that it is our own inherent racism which must cause this unfortunate situation, so we let them out as soon as possible. They, however, are not nice, so they tend to return to their cells as soon as they can manage it.

Oh yes, we’re definitely nice. And they most obstinately are not.

The evidence of our inherent badness is that they don’t turn into nice people. If we weren’t so bad, they would have the opportunity to become nice people. Since our badness is so apparent, we assume they must be inherently good, even if it is not at all obvious.

Our traditional Western culture — with all its racism, sexism, homophobia, etc. — is bad. Their culture is good, with its distinctive cuisine, its different forms of dress, its unusual customs, and its religion. Sometimes their culture seems to be a bit more racist, sexist, and homophobic than our own, but, hey — that’s the way it is with cultural differences. If we examine all their practices on their own terms, we discover that they are in fact better than our own. Hence we allow them to maintain their ancestral customs intact within the enclaves we allow them to establish in our cities.

We are materialistic, and they are natural children of the earth. The fact that they tend to suck up a disproportionate share of our wealth is a contradiction we choose to ignore. They are the noble savages in our midst, and can teach us to live more authentic lives.

As a corollary, we are the ones who damage the environment, while they are simple folk who live in harmony with the earth. In order to believe this, we have to overlook the poisoned wastelands that many of them left behind when they came here, not to mention the backyards of the state-provided housing where they live now. But that’s not difficult, because all of the information about them is channeled through our media, which are fully convinced of our badness and hence are eager to present the “fake but accurate” picture of their goodness.

Our levels of achievement and excellence are an insult to them, and are a result of our racism. In our badness we have failed to ameliorate this problem, so we reduce the standards for everybody to allow them to achieve the same degraded results that we do, in the hope that out of their deep goodness they will no longer feel insulted.

Because we are bad, our presence in this world is truly an abomination, and we will limit our reproduction and subsidize theirs so there are fewer bad people and more good ones in the generations to come.

The above caricature serves both to highlight the apparent contradiction in our deep attitudes towards “The Other”, and also to explain why there is no real contradiction.

We are nice because we are superior. They are not because they are inferior.

Our treatment of them displays the condescension of an aristocrat towards his forelock-tugging tenants. Every time we show evidence of our niceness by being tolerant, generous, accepting, and open to cultural differences, we only serve to enhance our inherent — and correct — feelings of superiority. Every time they fail in school, burn cars, rape our teenage daughters, attack policemen, and put knives to the throats of our bus drivers, they demonstrate to us their inferiority.

The awareness of our superiority may remain subliminal, but it is always there, and every time our kindly hand reaches out to feed them and gets bitten in return, the feeling can only intensify. Since our niceness requires us to be generous in the face of ingratitude, and our increased generosity sparks an even more violent lack of reciprocity, we have entered a vicious circle which can only grow worse with each passing year. The average “nice” Westerner feels more superior to the fuzzy-wuzzies now than he did a generation ago, thanks to all those additional decades of increased but unrequited niceness.

However, “Bull” Hitler stands over us ready to remind us of the “sin of racism”, which is evidenced by our feelings of superiority towards those whom we have invited in, but who do not behave well. Our “racism”, which is assumed to generate this sense of superiority, proves our badness — from which it follows that those violent gangs and welfare parasites in our midst must somehow be good.

Hence we must be even nicer to make up for so much badness. And the beat goes on.

Sin is always with us, and modern secularists feel it as keenly as do the bible-thumpers in their revival tents. The reaction to secular sin is simply expressed differently — universal socialism, radical environmentalism, the purging of all “racism”, “sexism”, etc.

Unfortunately, secular orthodoxy, unlike Judaism or Christianity, provides no mechanism for repentance and absolution. Secularists are stuck with their sense of sinfulness, and can only expiate it by projecting it outwards onto others — onto the homophobes, racists, and bigots who cause all the badness in us to manifest itself.

Thus we created “Bull” Hitler as a perpetual reminder of our secular sin. He stands over us, ready to stamp out the first sign of our sinful racism whenever and wherever it appears. Our greatest fear is that without him to protect us, we face the likelihood that our sins will devour us.

Unless the West experiences another Great Awakening — which seems unlikely at this point — our civilization will have to find some secular way of exorcising “Bull” Hitler.

If we fail to do that, the insanity and irrationality of our collective obsessions will bring destruction down upon ourselves and all that we hold dear, as surely as Götterdämmerung came to that Berlin bunker in 1945.