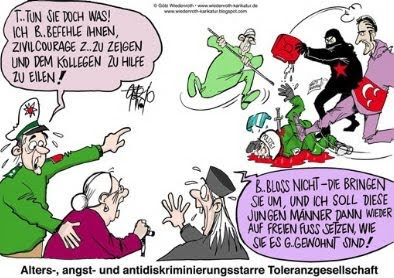 Caption: Society of tolerance made numb by age, fear, and anti-discrimination

Left balloon: “Do something! I order you to show civil courage and go to help my colleague!”

Right balloon: “Absolutely not! They’ll kill you and I am supposed to let these young men walk free, as they expect!”

We’ve reported in the past about the no-go areas in various German cities which even the police do not dare to enter without fear of violent attack. As the earlier report said:

“The problem with violence against the police has escalated in recent years. The police have to concentrate increasingly on self-protection” says national chief of police Konrad Freiberg to Die Welt. “When a fellow policeman goes on duty, he never knows what might happen to him”.

Many thanks to JLH for translating the following article on the same topic from Tuesday’s Der Spiegel. Like most European media reports, the ethnicity of the thugs is not mentioned. However, as Mark Steyn has frequently mentioned, whenever there is violent mayhem in a European city, more often than not the name “Muhammad” appears in the police report:

Attack on the Train Platform
Youths Beat Up Police

Attack in a train station: A 16 year-old and a 21 year-old are said to have beaten up a federal policeman in Lower Rhine Wesel. According to Spiegel-Online information, the policeman, dressed in civilian clothes, had called the attention of one of the perpetrators to the no smoking ban in trains.

Hamburg. The assault seemed like a mocking comment on the words. Just a week after the highest federal policeman in an internal memo had demanded an improved police presence in train stations, one of his officers was pummeled by two young men — in a train station.

Just before 10:00 PM on the evening of March 30, in a local express from Duisburg to Emmerich. according to information obtained by Spiegel-Online, police inspector Carsten S., 30 years old, spoke to a group of young men. The officer from the police inspection station Duisburg was on his way home and dressed in civilian clothes. He pointed out to the young people that smoking was not allowed in the train. He was severely insulted (“ the cops!”)

The attack followed in the train station at Wesel, Lower Rhine. Muhammad A., 16, who had already clashed with Carsten S. in the train, and Cantekin E., 21, clobbered the police inspector with blows and kicks until he collapsed. When he called for help and said he was a policeman, no one at first reacted. Then one bystander took pity on him and helped the police who rushed in a little later to take the assailants into custody.

Severe Wounds on Head and Stomach

The perpetrators who injured Carsten S. on the head, stomach, and one hand were well known to police. Cantekin E. had already been investigated for grievous bodily harm, threatening, and robbery. His companion, Muhammad A. is a multiple offender.

Neither the investigating police in Wesel nor the federal police made the incident public. When Spiegel-Online asked why, a federal police spokesperson said that they had not thought it to be important.

Perhaps the officials feared a renewed debate about general security on buses and trains. On March 22, federal police president Matthias Seeger sent out an internal letter underlining the necessity to be more visible in local and mainline stations. 66% of his people would spend their time on patrol.

A less than Complimentary Report

According to Spiegel-Online information, the background of the circulated letter was a less than complimentary report on the federal police by the federal audit court. In more than a quarter of the 121 stations, the examiners had found that there were too few officers to man the station and simultaneously patrol.

Therefore, the federal police, who are responsible for security in train stations, must be better organized. According to the examiners, besides a deficit in personnel, there was also a lack of guidelines and concepts for fielding officers in the stations.

As if that were not enough: the burnout rate among federal police is worrisomely high. A study by the Interior Ministry adds to this conclusion. Between the first investigation in 2006 and the second in 2008, the number of affected police officers rose from 15% to 25%. The burnout rate for local and provincial police, on the other hand, is only 10%.

In the middle of March, the railroad announced a security offensive. Among other things, the railroad’s own security personnel in heavily populated areas will be raised by 150 and video surveillance will be improved. This positive signal from the railroad, according to the federal police president’s communication, could also raise questions about the visible presence of the federal police, which Seeger intends to improve.

According to the account of an eyewitness, the federal police receiving the call for help had to come from Duisburg, Kleve, or Oberhausen and needed a solid three hours to come to the assistance of their colleague, Carsten S. Local police were quicker, arriving in ten minutes.

Meanwhile, the suspected assailants are walking around free.

9 thoughts on “Beating up the Police”