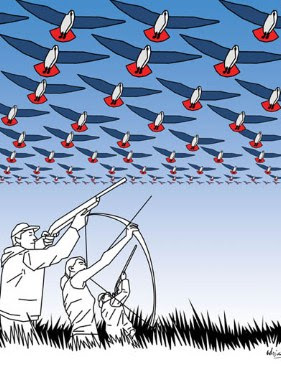 For the eighth installment in our series about the parallels between Pim Fortuyn in 2002 and Geert Wilders in 2010, instead of videos we will look at political cartoons. The cartoon above appeared on the website of the state-funded broadcaster VARA in the Netherlands. The iterated bird in the sky is the symbol of Geert Wilders’ party, the PVV.

For anyone with even a rudimentary knowledge of recent history, this image is quite chilling. Remember what happened to Pim Fortuyn. Doesn’t this seem like a recommended course of action for the general public, as distributed through the state propaganda service?

Our Flemish correspondent VH has translated an article about this and other cartoons by the same artist, taken from Dagelijkse Standaard:

Earlier at DDS [Daily Standard], and later in the free train newspaper Spits, it was concluded that the [government funded broadcaster] VARA is a PvdA (Socialists) Institution. The television propaganda, however, is nothing compared to he slurs the VARA website Joop.nl produces on a daily basis. Case in point: the VARA cartoonist Adriaan Soeterbroek. 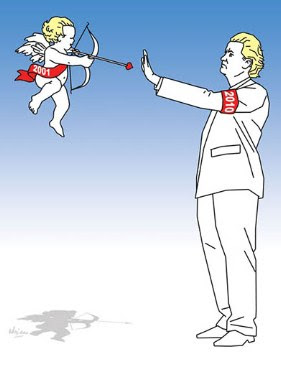 The drawings he occasionally dumps — at your expense, of course — on the VARA-website have also been the subject of conversation at DDS. Not wrongly of course, because where other political cartoonists waste their time inventing a deeper message, a false bottom if you like, the VARA cartoonist makes life for the left-men orderly: French people who are against the burqa are KKK, Wilders is a Nazi, and a headscarf ban is apartheid [with PVV logo]. 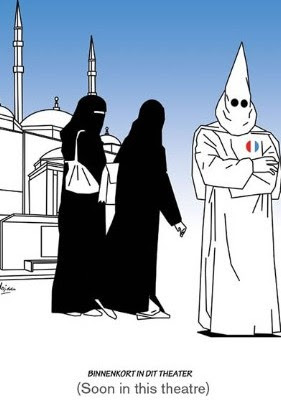 More good news: these three gems were all produced in the time span of one month. Adriaan Soeterbroek is not only a little drawing-talent, but also possesses an unprecedented productivity for a left-winger. Indeed, Adriaan Soeterbroek is currently — in the context of the election probably — working on cartoons that match the theme “the hunting season is open”. For Adriaan Soeterbroek, this apparently means — so far as this was not already the case for him anyway — that every cartoon must be about the PVV/Wilders. 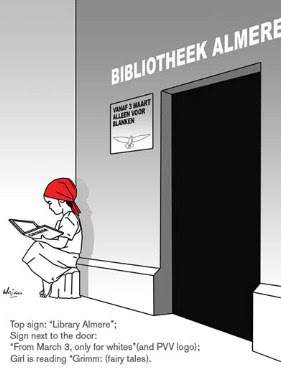 You want to know what your tax money is spent on? All the work of Adriaan is here, and here (register first) you can become a fan, here you can subscribe to him, and the real die-hard fans can dump their appreciation in an account number that will make your donation automatically end up with the VARA cashier.