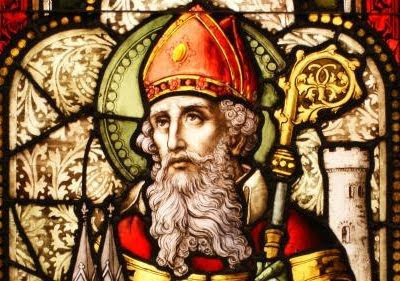 Since virtually no Irish blood runs in my veins, I’m not properly qualified to write a St. Patrick’s Day post. Nevertheless, Dymphna has given me permission to create one in her stead.

When I was a kid, St. Patrick’s Day was still mostly for proles. That was back before he was gentrified, when the Irish were still Irish, before they became “Celts”.

Back then the proper abode of the Irish — outside the walls of the Catholic Church — was the tavern or the smoke-filled rooms of Tammany Hall. Nowadays the Irish are more likely to be found in coffee houses and the folk-filled rooms of Celtic music festivals.

In my day, Irish songs were generally referred to as “shanties”. Here is a fragmentary transcript of one that has stuck in my mind for all these years:

In eighteen hundred and forty-two,
I left the old world for the new,
Bad cess to the luck that brought me through
To work upon the railway.

It’s “Pat do this” and “Pat do that,”
Without a stocking or cravat,
And nothing but an old straw hat
While working on the railway.

All that has changed. Today’s Irish music is for the high-minded and the literate. Check out the Celtic music programming on NPR if you doubt my word.

But St. Patrick’s Day has retained most of its plebeian charm, what with green beer and parades of giant leprechauns and sodden Celts-for-a-day hurling into the gutters.

For a change of pace, here’s another voice from the past. As early as the 1930s, Ogden Nash — whom I suspect of being a filthy Sassenach like yours truly — had his own bone to pick with the commercialization of St. Paddy’s feast day:
– – – – – – – – –

It’s a Grand Parade It Will Be, Modern Design
by Ogden Nash

The saint was born a subject of the ancient British throne,
But the Irish in their wisdom recognized him as their own.
A raiding party captured him, and carried him away,
And Patrick loved the Irish, and he lived to capture they,
A-walking of the valleys and a-spreading of the word.
I think that of Saint Patrick’s Day, Saint Patrick hadn’t heard.

But the silver-tongued announcer is a coy, facetious rogue;
He ushers in Saint Patrick with a fine synthetic brogue,
He spatters his commercials with macushlas and colleens,
Begorras, worra-worras, and spurious spalpeens.
I hope one day Saint Patrick will lean down from Heaven’s arch
And jam the bloody air waves on the Seventeenth of March.