Palestinians have fled the war, but they have also brought the war here to Malmö.

The southern Swedish city Malmö and its Socialist mayor have been in the news a lot lately, due to widespread anti-Jewish incidents — mainly instigated by Muslim immigrants — in the city. Jewish residents are leaving in record numbers, and even the most fastidiously politically correct news reports are having difficulty glossing over what is happening.

Our Swedish correspondent Henrik W. has translated an article from a Finnish paper about the situation in Malmö, and includes this prefatory note:

This article from the Swedish-language Finnish daily Helsingfors Dagblad says a few things about the situation of Jews in Malmö — and about who is to blame for that situation — that I don’t think Swedish mainstream papers are quite ready to publish yet.

Henrik W.’s translation of the article:

The police suspect that the real number is higher. Some people don’t dare to report the hate crimes out for fear of the consequences; others don’t think it reporting accomplishes anything, since the police never manage to catch the perpetrators.

Judith Popinski, aged 86, is a survivor of the Nazi death camp Auschwitz in Poland. She was saved and brought to Sweden by the White Busses, organized by the Swedish Red Cross in April of 1945. Her whole family was exterminated in the gas chambers or starved to death in the Nazi camps. It hurts to have the hatred of Jews, the anti-Semitism, to contend with again. 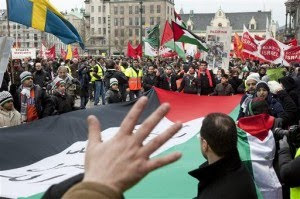 The attacks on Malmö’s Jews exploded during the Israeli war on the Palestinian enclave Gaza in December 2008.

Some members of the Jewish congregation of Malmö demonstrated for peace and compassion towards the civilian casualties back then, but were met by a much larger counter-demonstration, from which shoes, fireworks, bottles and Molotov cocktails where thrown at the Jewish demonstration. The police were few and seemed totally unprepared for the turn of events. Judith Popinski, who participated in the smaller, Jewish, peace demonstrations recounts:

“They chased our small, peaceful group into an alley behind the town square. We had peaceful signs about everybody’s right to live, nothing that could possibly provoke. But still we met the mob, even small children, who shouted that they would kill the Jews. It made a terrible impression on me. Not because I was afraid, but because it got to me. I’ve seen it before. My husband and I recall the pre-war Polish anti-Semitism,” she says.

After those events, the situation didn’t revert to normal. In January 2009, the Jewish chapel of Malmö burned. The Jewish cemetery has been desecrated and vandalized, members of the Jewish congregation are being harassed by masked men, and small children have abuse heaped on them. A Jewish boy recently told [local daily] Skånska Dagbladet that a classmate had threatened to “Halal butcher” him.

One hate crime follows another. The trainer of Malmö’s Jewish football team, SK Hakoah, was beaten when the audience stormed the field during a match against Kosava, an Albanian team in the 6th division. In the neighbouring town of Helsingborg someone tried to set fire to the synagogue.

Among the Jews of Malmö, there is no doubt that it is Muslims who are responsible for the hate crimes. There are 2,000 Jews and around 40,000 Muslims in Malmö.

There is no dialogue between the groups.

“When we reopened our chapel after the arson there were representatives of the Muslims there too. We have no quarrel with them. Ninety-nine per cent of the Muslims are decent people who don’t want to visit ill upon us… but even one per cent is quite a lot. We’ll have more encounters with them in the forum for dialogue that the city is about to start,” says Fred Kahn, the chairman of the Jewish congregation.

Judith Popinski is short. She says it was circumstances that determined who lived and who died in the concentration camps, but that a small woman makes do with less food than a big woman or a man does.

Her small stature might have saved her. For 20 years, Judith Popinski has been visiting middle and high schools in the Malmö region to inform about the bestial Nazi crimes against humanity.

In some classes there are Muslim students. The schools that are almost exclusively Muslim don’t welcome her.

“In schools with just a few Muslims students they can’t stop me from coming. Sometimes I’m met with derision and scorn, but I try to enforce their respect for me. I tell them they don’t have to listen, but that they shouldn’t disturb the others from listening.”

Judith Popinski has a natural authority whom you find yourself loath to challenge. She tells the students of the terrible things that happened to her people during the German occupation of Poland, but also of her love for Sweden.

“When I came to Sweden, all I had was a thin, dirty dress on my body. I was confused and very sick. I was met by massive kindness and humanity. Swedish doctors did everything in their power to save lives,” she says.

She and her husband, Abram Popinski, also a Holocaust survivor, loved Sweden and never contemplated moving to Israel, which was founded in 1948. They burrowed into the new country, studied, worked hard, helped building the country in the post-war boom. They were successful.

“No matter where you are from you should show respect to those who already inhabit the country,” she says.

“The Muslims of Malmö don’t have to love us, but they must leave us alone. We aren’t Israel, we haven’t waged war in Gaza. Palestinians have fled the war, but they have also brought the war here to Malmö.”

The hate crime wave against Malmö’s Jews has gained a huge amount of international attention. The Sunday Telegraph, one of the biggest newspapers in Europe, wrote last week that Jews are now fleeing Malmö. Some thirty Jewish families left Malmö last year.

Back when he grew up in Malmö himself in the 1950s and 1960s, young Jewish couples tended to move back to town when they wanted to start a family.

These days, the current has turned. Young Jewish families move to Israel, to Stockholm and to the neighbouring town of Lund where the sentiments are much different from those in Malmö.

“The Jewish congregation is depleted. We would love to see Malmö as a good place to live in again, for Jews as well. As good as it was when I grew up. If an anti-Semitic incident had happened then, the whole society would have reacted with outrage and condemnation. That’s the difference now.”

It’s not only the hate crimes that are focusing the attention on Malmö. The Jewish congregation has also accused the political leadership of the town of not condemning the harassment.

First among those accused is Ilmar Reepalu, Social Democrat mayor of the town.

In the local daily Skånska Dagbladet, he was quoted saying this during the Gaza war: “I wish that the Jewish congregation would distance itself from the Israeli violations of the civilians of Gaza. Instead, they choose to hold a huge demonstration in the city square, which could send the wrong signals.”

In The Sunday Telegraph, he goes even further:

“There have been no attacks on Jews. If Jews here want to move to Israel, that’s no concern of the city of Malmö.”

Ilmar Reepalu thinks it’s unfair that he’s being pointed out as an anti-Semite. He repeatedly made the claim that he’s been misquoted.

After meeting with the Jewish congregation, he gave a new picture of the situation in the city.

“The hate picture is much worse than I thought. Now we shall meet other groups, communities and organizations as well and see if we can get a picture of what they feel. Then we’ll see what we can do to make people feel safe in Malmö,” says Reepalu.

Fred Khan calls the meeting with Reepalu a good start.

“Well have to see how it turns out. We had a frank conversation. There is now going to be a dialogue forum where the anti-Semitism and racism in Malmö will be tackled. Police and the legal representatives will concentrate on hate crimes.”

Judith Popinski thinks Reepalu has played into the hands of the hate crime perpetrators.

“Words can kill too, words turn to acts and acts kill.”

“Mona Sahlin came here and said some pretty words, but she’s been to Malmö before. Then she donned the veil and went to the mosque. That’s a strong signal. If you’re out fishing for votes, 700 doesn’t weight as much as 40,000. That’s simple maths,” says Popinski.

But there has been no return to the normal for the Jews of Malmö yet.

Ammon Tsubarah, the cook for the Jewish congregation, tells of his daughter, who is now hiding the fact that she’s Jewish. And Ammon has gotten a lot more careful himself when he goes about the town.

He used to walk around with the Jewish head gear, the Kippa. He doesn’t any more.

9 thoughts on ““It Is Better to Be Wise Than Dead””