The Austrian website SOS — Österreich has posted its own take on what the Austrian MSM has called Elisabeth Sabaditsch-Wolff’s “Hate School” — that is, her tutorials about Islam which have been given at several locations under the auspices of the FPÖ, and which have caused her to be investigated for “hate speech” by the Austrian authorities.

Liz from Europe News did the translation, with some help from ESW:

Visiting a “Hate School” Against Islam

We all remember the undercover story of a weekly glossy two months ago about an alleged “FPÖ hate school”! Last night, a “hate-event” of the same kind took place — someone from our blog SOS Austria was also present!

To begin with, a few years ago I attended a lecture on a Vienna community college about “Das Kapital — Karl Marx” (also supported with tax money)! There was definitely more “agitation” against capitalism, lobbyists and the U.S., …

In 95% of her three-hour lecture on Islam, the Koran, and sharia, seminar leader Elisabeth Sabaditsch-Wolff cites Muslims from around the world, or directly from the Koran. She holds back with her own interpretations — even without an undercover agent present! Among those attending we noticed no traces of aggression — they were more horrified by what they heard. During a break, the mood was relaxed, but with no signs of xenophobia or the like! We were also able to note that there were not only FPÖ members present, but also concerned citizens.

The fact that Islam has already entered into our society can be seen and experienced almost every day.

We have also published many examples showing that Islam does not adapt to Europe, and that only our culture, values and society does the adapting… all in the name of tolerance towards Islam.

The background of this development can be found repeatedly in sura after sura in the Koran. Mrs. Sabaditsch-Wolff shows countless examples from the Koran — the good woman did not write it, so why is she being accused of hate speech??

Some photos were shown as well, for example: 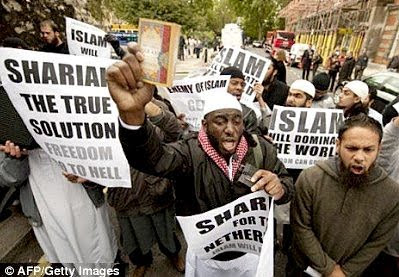 The photos were from a Muslim demonstration in London — why are such pictures withheld from us? This demo actually took place! And aren’t we proud of our “free speech” ?

The creeping Islamization of Europe is real; all other opinions about this fact are unrealistic, consciously or unconsciously!

5 thoughts on “An Austrian “Hate School””