I reported briefly yesterday on the sharia requirement for female circumcision, as mandated by Reliance of the Traveller, which is the authoritative law manual under the Shafiite school of Islamic law. In the comments section on the post, Inalienable Rights requested that I scan the page in question and post it so that everyone could have a look.

I’m more than happy to comply, but a first brief introduction is in order. We (that is, people who resist the Great Jihad) are routinely accused of distorting Islamic doctrine, quoting material out of context, relying on “extremist” sources that do not represent “true Islam”, etc. I’ll present the material here as if I were establishing an evidentiary chain in a court of law, citing factual material from creditable sources so as to present a case that could stand up before a judge and a jury.

But this process represents Western standards of logic and legality. None of it will stop me from being accused of “defaming Islam”, because anything I do — even quoting authoritative sources on Islamic law — is defined as “defamation” under sharia if it does not serve to further Islam.

That’s why the kuffar may be legitimately shouted down for quoting the Koran, while Muslims may do the same freely. This is not illogical, and there’s no contradiction: it makes complete sense, once you understand the basic premises of Islamic doctrine. 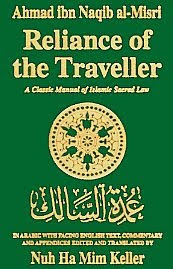 The source I cite here is ’Umdat al-salik wa ’uddat al-nasik, or The reliance of the traveller and tools of the worshipper. It is commonly referred to as Reliance of the Traveller when cited in English.

According to the title page, my copy is the Revised Edition (published 1991, revised 1994) and is “The Classic Manual of Islamic Sacred Law ’Umdat al-Salik by Ahmad ibn Naqib al-Misri (d. 769/1368) in Arabic with Facing English Text, Commentary, and Appendices”, edited and translated by Nuh Ha Mim Keller. The publisher is listed as amana publications in Beltsville, Maryland.

Why do I consider this an authoritative source on Sunni Islamic law?

Because it is certified as such by Al-Azhar University in Cairo. There is no higher authority on Sunni Islamic doctrine than Al-Azhar; it is the closest equivalent to the Vatican that can be found in Islam.

IN THE NAME OF ALLAH, MOST MERCIFUL AND COMPASSIONATE

Peace be upon you, and the mercy of Allah and His blessings.

To commence: In response to the request you have submitted concerning the examination of the English translation of the book ’Umdat al-salik wa ’uddat al-nasik by Ahmad ibn Naqib in the Shafi’i school of jurisprudence, together with appendices by Islamic scholars on matters of Islamic law, tenets of faith, and personal ethics and character: we certify that the above-mentioned translation corresponds to the Arabic original and conforms to the practice and faith of the orthodox Sunni Community (Ahl al-Sunna wa al-Jama’a). There is no objection to printing it and circulating it.

The stamping of the pages of the above-mentioned work with the seal of the department has been completed.

May Allah give you success in serving Sacred Knowledge and the religion. Peace be upon you, and the mercy of Allah and His blessings.

This is the original Arabic, for those of our readers who read the language and can translate it for themselves. For everyone else, below is an image of the English side-by-side with the Arabic. I include e4.4 just to give you an idea of the type of material covered by Book E:

And here is the same text after it has been processed through the OCR:

e4.3 Circumcision is obligatory (O: for both men and women. For men it consists of removing the prepuce from the penis, and for women, removing the prepuce (Ar. bazr) of the clitoris (n: not the clitoris itself, as some mistakenly assert). (A: Hanbalis hold that circumcision of women is not obligatory but sunna, while Hanafis consider it a mere courtesy to the husband.)

As I mentioned yesterday, this section demonstrates that all four schools of Sunni law consider female circumcision a good thing, and two of them list it as mandatory.

I also mentioned that the original Arabic is more stringent than the English version, in that it specifies excising the entire clitoris rather than just the prepuce. I find further backing for this assertion in the Australian Islamist Monitor, which reports:

Reliance of the Traveller, a classical manual of Islamic sacred law in Arabic with facing English text, commentary and appendices edited and translated by Nuh Ha Mim Keller (1994) re ‘circumcision’ we find the Arabic actually says –

“Circumcision is obligatory (for every male and female) by cutting off the piece of skin on the glans of the penis of the male, but circumcision of the female is by cutting out the clitoris (this is called HufaaD). “ (p59) (Shafi’I jurisprudence)

(Note the English version is falsely translated as ‘prepuce ‘ of the clitoris!!)

The Arabic word bazr does not mean “prepuce of the clitoris”, it means the clitoris itself (cf. the entry in the Arabic-English Dictionary). The deceptive translation by Nuh Hah Mim Keller, made for Western consumption, obscures the Shafi’i law, given by ’Umdat al-Salik, that circumcision of girls by excision of the clitoris is mandatory. This particular form of female circumcision is widely practiced in Egypt, where the Shafi’i school of Sunni law is followed. Note a comment by Sheikh ‘Abd al-Wakil Durubi in the English ‘version’ notes “Hanbalis hold that circumcision of women is not obligatory but sunna, while Hanafis consider it a mere courtesy to the husband.” (answering-Islam.org)

This is supported by several hadiths eg

Abu-Dawud Book 41, No. 5251: Narrated Umm Atiyyah al-Ansariyyah: A woman used to perform circumcision in Medina. The prophet (peace be upon him) said to her: Do not cut severely as that is better for a woman and more desirable for a husband.

(Note: The powerful Mohammad did NOT stop the procedure yet he did stop the Arab practise of adoption when he wished to marry his adopted son’s wife Zainab, regarded as incest by the Arabs because adopted sons were held as sons!)

Anyone who reads Arabic is invited to check the image posted above against what AIM says here, and see if you agree with it.

With this, the sharia justification (and, under Shafi, requirement) for radical female circumcision is now clearly and fully demonstrated, and constitutes a “fact in evidence”.

12 thoughts on “Al-Misri on Circumcision”