Opponents of the Islamization of Europe gathered in Germany on Saturday to discuss the idea of a referendum on an EU-wide minaret ban, modeled on last year’s referendum in Switzerland. In an ironic hoist-with-their-own-petard moment, the referendum is being proposed in accordance with the EU’s own rules recently put in place by the implementation of the Lisbon Treaty.

Our Flemish correspondent VH has compiled a report on the event in Gelsenkirchen, beginning with a summary based on articles from NOS and FOK! Nieuws:

Call for EU referendum on minarets 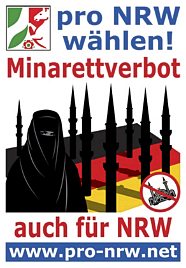 A number of right wing parties from several European countries would like to see a follow-up on the Swiss minaret-ban in Europe.

The parties announced this at a conference on March 27 in Gelsenkirchen, organized by the German party pro-NRW to launch a campaign for a European referendum. The Treaty of Lisbon makes European referendums possible under certain, not fully worked out conditions. For instance, it is unclear exactly how many countries should support such an initiative, although the according to the European Commission, nine member states should be sufficient. Of those countries, 0.2 percent of the population would then have to sign off on the initiative. As soon as this is clear, a follow-up conference will be organized in the European capital Brussels, to take the next concrete steps towards an EU-wide referendum.

The referendum that was held nearly four months ago in Switzerland at the initiative of the Swiss People’s Party (SVP) stands as the model for the European referendum (including the poster, which is used with permission of the SVP an adapted version of the Swiss poster). Around sixty percent of Swiss voters agreed last year with a ban on minarets.

Besides the German party pro-NRW, other parties from among others Belgium (Flemish Interest), Austria (FPÖ) and Sweden (Sverigedemokraterne) took part in the initiative.

The various speakers at the conference left nothing to the imagination. Filip Dewinter, leader of Vlaams Belang said: “Islam is a conquering religion that seeks the destruction of our democracy and its replacement replace it a dictatorship based on Sharia. On one thing you need not doubt: Islam intends to conquer all of Europe. Islam is a predator, ready on jump on the weakest victim: Europe ages, dies out and leaves itself blinded by the multicultural away-with-us ideology.

Also the Catalan Josep i Rius Anglada and the Swede Kent Ekeroth let their opinions be heard. Rius Anglada quoted an old Spanish slogan, which was used in battle against the forces of the dictator Franco. “Islamists, no pasaran, you cannot get through.” Kent Ekeroth said, quoting Winston Churchill: “We’ll fight till victory. Victory at all costs. Because without victory we will not survive”.

Vlaams Belang and the Austrian FPÖ put a lot of effort in the financial and organizational support into the campaign and into pro-NRW. Dewinter: “Here we lay the foundations of an international [organization] against Islamization. We are the voice of the European majority.”

Following the congress, in Duisburg-Marxloh a demonstration was held to protest against the building in Marxloh of the large “Merkez Mosque”.

From Abendland in Christenhand, the website of the anti-minaret initiative:

The Turkish press outlets “TÜRKIYE” and “SABAH” reported with sensational and polemical articles about the planned international conference of pro-NRW for a Europe-wide ban on minarets in the Ruhr area and the planned protests at various mosques. According to them, the activities should be prohibited by the executive, as it would allegedly insult Muslims and would undermine their rights. Turkish journalists had also announced that they would show up in great numbers on the last weekend of March to defend the supposedly marginalized Muslims in the Ruhr area.

Source for the minaret poster: Abendland in Christenhand.