Several weeks ago a Dutch reader sent us a set of essays by an expatriate Dutch writer named Arthur Legger. I forwarded two of them — one from The Wall Street Journal and the other from IFPS — to our Flemish correspondent VH, and asked his opinion of them.

As regular readers know, VH is very well-informed on both Belgian and Dutch affairs, and documents his opinions copiously using multiple sources. His reply to me was so thoughtfully pessimistic that I was taken by surprise — VH has an invariably sunny and optimistic disposition, but his outlook for the Netherlands was startlingly gloomy.

With his kind permission, I have merged and edited two of his emails into the essay below. My questions to VH have been interpolated in italics:

The “traditional Dutch liberties” that according to the WSJ existed from 1997 until 2005 had in fact already ceased to exist since the immigration flow started to boom in the mid-1970s. Many non-left-wing and conservative Dutch people learned to be careful after that, to go with the flow, and to share real opinions only with the most trusted friends, and in private.

In the eighties a politician was convicted for stating: “When we have the chance, we will abolish the multicultural society”. And when Frits Bolkestein of the VVD expressed his critique of multiculture and mass immigration in parliament in the early 1990s, a very silent electorate rewarded him with a substantial increase in votes, only to be betrayed by Bolkestein being kicked upstairs to Brussels, to the EU…

In Arthur Legger’s excellent essay, he quotes Dr. Hans Daudt: “Via the main political parties the traditional regent families are still in power.” That, however, may be only partly the case with the royalty and its entourage.

For among that “entourage” is the multicultural elite, and they influence each other and hold power. Princess Maxima — who in 2002 was introduced to the ins and outs of Dutch society by extreme left-wingers and multiculturalists and ex-DDR admirers like Andrée van Es (now Secretary General of the Ministry of Internal Affairs) and Paul Rosenmöller (ex Pol Pot propagandist who, as a GreenLeft, easily got away with that) — once stated to Gretta Duisenberg (maybe the most notorious Arafat- and Hamas-admirer and anti-Semite in the Netherlands) that Dutch identity does not exist. Duisenberg: “One time Princess Maxima was there at a reception, and I passed by her, and she called me and said: ‘I want to say that I really admire you’.”

That is how bad it is with the Netherlands.

Marcouch and Aboutaleb are indeed “highly integrated”, as Legger writes, but that concerns their ability to play the Dutch political game, and above all both have a double Islamization-Maghrebization agenda that fits in with Multiculturalism and the abolition of the separation of church and state, which the governing CDA and royalty seek to implement.

“…the erosion of traditional Dutch liberties observed by The Wall Street Journal is not caused by the Muslim immigration but by the desire of the Dutch political, cultural and religious elites to create a new, braver Netherlands.”

Agreed, but I think it goes further and is more devastating than that: not a braver, but a feudal Netherlands, like China, a Socialist Netherlands with a permitted and controlled portion of “capitalism” (to produce tax, jizya, and dacha) without the disturbance of the “brussels-sprout-eaters” — the unwilling, anti-utopian, right-wing racist “petit bourgeois” whom they detest, and who should become a silent cheap work force.

They simply don’t want a democracy with its elections of uncertain outcome, they want China-ization. They also don’t want a true trias politica, but absolute power to the elite, like the impatient Mussolini who thought the elite had to take over (revolt!) to enforce the Socialist Utopia on behalf of what were in his view the “passive” proletariat.

And, as Andrew Bostom stated, since Communism was perhaps the Islam of the 20th century, Islam may well be the Communism of the 21st.

The Left, including royalty, together are like a lioness who, since the fall of communism, dreams once again of a utopian Socialist paradise, thanks to the coddling of the lion, who is dreaming of an Islamic utopian caliphate. Both their tails are being stepped on by — this time — Geert Wilders’ electorate, those unwilling “brussels-sprout-eaters”.

At in this stage in the Netherlands this can, I fear, be solved only with great difficulty through democracy (though I hope it will). The Netherlands is split into two incompatible sections. On the one hand are the royalty, the “Provo-elite”, the Islamists, and all their tax-digesting, dependent electorate and foot soldiers, and on the other is the approximately 30% of the population that still has common sense and does not want that “Utopian Socialist Caliphate”.

There is another statement in the WSJ that is important and also noted by Legger: “This is no small victory for Islamic regimes seeking to export their censorship laws to wherever Muslims reside.”

He might have extended this a bit, and added “implement” to “export”: the Wilders trial will have as an effect that non-Muslims and indifferent Muslims in the Middle East and maybe the Far East will suffer from the massive encouragement — resulting from that prosecution — to enforce Islam more vigorously upon them. And that will hit back against the West.

Legger continues: “Again, the proof is in the timing,” which is absolutely right, but aside from that, Balkenende had already promised the Islamic world that he would go after Wilders when he had the opportunity: 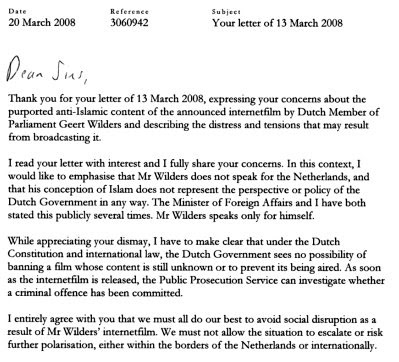 And that is what is being done now, because fulfills a promise. Balkenende has made an unforgivable major mistake here: giving in = surrender = submission. Any “Super Nanny” could have told them.

Snouck Hurgronje: “It was thought remarkable that the monarch of a powerful European empire [Germany] should go twice to pay homage to the Sultan, the more as it was known that no return-visits of the Sultan followed; the caller therefore showed himself to the inhabitants as the inferior; and simple Mohammedan souls, who draw their knowledge of the world’s map and the world’s history more from legends than from reality, saw in this a confirmation of their belief that the whole earth is subjected to the mightiest Moslem sovereign,” And “To modern states which have Mohammedans as subjects, protégés, or allies, the beautiful task is reserved of educating these and themselves at the same time to this high conception of human society; rather than leading them back, for their own selfish interests, into the ways of mediæval religious hatred which they were just about to leave.”

The former President of Indonesia, Abdurrahman Wahid, warned of opportunistic politicians who side with Islamic extremists: “They have joined the extremists in driving our nation towards a deep chasm, which threatens destruction and national disintegration.”

And that is precisely what I think is happening now.

The Dutch government is, out of arrogant and vicious eagerness, sprinkling oil on the Islamic fire, which will have an effect even in Israel, in India, in Malaysia, Indonesia, etc. We need courageous “Red Adairs” like Wilders or Col. Allen West to try to start extinguishing some of the flames.

But the damage has already been done. It will be a rough ride ahead. Maybe rougher than Arthur Legger in his (again: really excellent) article foresees; but then I am maybe a bit more superstitious.

I’m astounded — I thought Legger was pessimistic, but now it seems that you are even more pessimistic than he!

Yes indeed, maybe I am. The establishment politicians have shown themselves to be ruthless and shamelessly anti-democratic in dealing with different democratic political views, or more precisely: with non-Socialist/Multiculturalist/EU views.

After the assassination of Fortuyn, and later Theo van Gogh, this repetition of events on an even larger scale is worrying, but it does not worry the establishment politicians and MSM at all, and that is why I am afraid they are at it again. Maybe not an assassination (on Dutch territory), for that might trigger a revolt, but by outlawing Wilders and the PVV and scaring off the electorate. 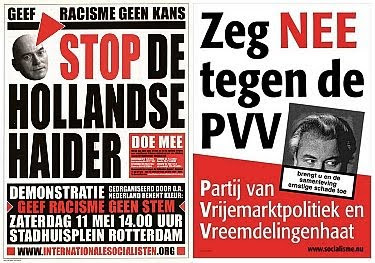 After Fortuyn was assassinated, and full-grown Dutch politicians exposed their childish and vicious undemocratic hypocrisy, I expected the Netherlands to willingly slide further down the Multiculturalist path, which is in my view towards a merger of Communism and Islamism into a totalitarian Arab-Dutch monoculture.

Obviously, in the Netherlands, there is no room for (democratic) dissidents (this already says enough: Conservatives and classic right-wing politicians are dissidents!) and the citizens are too dependent on government hand-outs or too busy maintaining a life to rise up and stop this. Maybe something will happen that puts the Netherlands back on track (a near-majority vote for the PVV or a revolution), but for anyone with small children and the option to leave, the choice is easily made, especially since children are day in and day out indoctrinated with Multiculturalism and leftist historical lies in schools and the media.

So does this mean that you agree with Legger, that the assassination of Geert Wilders is inevitable, that it’s only a matter of time? And that his trial will destroy the PVV?

Not an assassination (on Dutch soil) per se, but yes: unless people dare to stand up and keep backing Wilders and the PVV in large numbers, the electorate will be scared off, including berufsverboten and more trials, and the PVV will be destroyed by infiltration, smear campaigns, blocking of finances, and by being outlawed. But also with political tricks like betrayal: pretending to have the same positions in order to seize the votes, only to drop them after the elections. Like the VVD has done before.

These are gloomy thoughts indeed.

Gloomy indeed, but I am not giving up. And I still hope that somewhere along the route the boat will change course, even at the last minute.

9 thoughts on “Towards a New Feudal Netherlands”