As we all know, any group that opposes indiscriminate immigration, seeks to defend traditional Western culture, and resists Islamization is routinely branded “racist”, “fascist”, and “neo-Nazi”. Geert Wilders, Filip Dewinter, Sverigedemokraterna, Pro-Köln, the Swiss People’s Party, the tea partiers — the list goes on and on. All of them share the goal of defending their nations from the encroachment of Islam under the guise of Multiculturalism, and all are called “Nazis”.

Let’s take a deep breath and remember who the real Nazis are.

During World War Two, The Third Reich recruited an entire SS division of Bosnian Muslims to fight for the Germans and help out with the Holocaust. Denazification cleared Germany of the National Socialist ideology, but it lives on in Bosnia, among the Muslim descendants of Hitler’s enthusiastic helpers.

And now comes news that an unabashed Nazi organization has formed among the Bosniaks.

The principal enemies of the Bosniaks are the Bosnian Serbs, and Serbian nationalists are routinely demonized in the Western press as “fascists”. Any journalist who continues to retail the Serbs-are-Nazis meme without questioning its accuracy is therefore contributing to one of the greatest injustices visited on any ethnic group since the end of the Cold War.

Here’s the story from Serbianna: 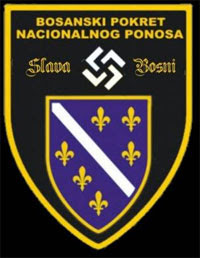 Bosnian neo-nazi organization was birthed today that insists that Bosnia belongs to the Bosniaks, an invented nationality with which Bosnian Muslims identify in order to avoid their religious background when talking to the Western press.

The new Nazi Bosnian Pride Movement (Bosanski pokret nacionalnog ponosa) believes that Serbs and Croats have no right to the state and that the state belongs exclusively to Bosnian Muslims, aka Bosniaks. The Pride’s insignia is pictured on the left.

The Nazi Bosnian Pride Movement has expanded its enemy list from their WWII predecessors, the Handzar Division and the Young Muslims.

As their enemies, Nazi Bosnian Pride Movement includes the usual ones they were exterminating in WWII — Jews, Gypsies and Serbs — but have expand the list to include Chetniks, Tito, communists, homosexuals, blacks and Croatian separatists.

The group plans to spread nazi leaflets very soon in the cities of Sarajevo, Zenica, Bihac, Tuzla and Mostar, all cities with substantial Muslim and Croat population that will find the message appealing.

The group’s a notoriously slow to load web site, bosnacenter.com, serves up a blank page but with little googling their moderated chat room appears with postings on Zionism, Serb Republic, Truth and 5 questions for prospective members.

One can also sport some of their multimedia courtesy of the YouTube.

35 thoughts on “The Third Reich Lives on in Bosnia”