As reported here during the last few days, a cartoon of “Mohammed the Pig” has caused outrage and street protests among Muslims in Norway. The current uproar has striking parallels with the Danish Mohammed cartoon crisis, with escalating rhetoric among Muslims and the refusal of the offenders to apologize. The latest incident included a warning (not a “threat”, mind you) of a “9-11 on Norwegian soil” if the infidels do not demonstrate the proper remorse and humility.

Reinhard of FOMI has translated an article from NRK about recent events in Oslo (thanks to Vlad Tepes for the video):

Warning of a Norwegian 9/11

On February 3, Dagbladet published a picture of a web page with a cartoon of Mohammed.

With the caption “Incitement against Islam amongst the secret police” the newspaper reported that the caricature was posted at the Facebook page of police security services.

The drawing provoked strong reactions among many Muslims.

On the night before Saturday February 6 and on February 8 several hundred taxi drivers parked their cars in Oslo centre.

On the February 9 the chief editor Lars Helle of Dagbladet and imam Mehboob-ur-Rehman had a fruitless discussion, in which Dagbladet declined to apologize for the front page. Rehman said he fears riots in Norway because of the publication.

A group, including among others Arfan Bhatti, started a Facebook group where they called for a demonstration at Stortinget [Parliament] on Friday February 12.

On February 10, Islamsk Råd [Islamic Council] encouraged people not to join in the demonstration against the cartoon, fearing that the action would be used by troublemakers. 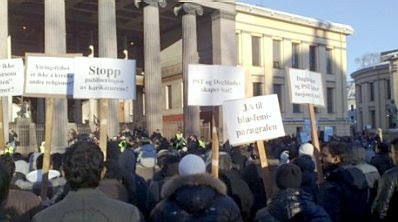 Readable signs, from left to right: “Free speech is not for insulting other religions”, “Stop the publication of the cartoons!”, “PST and Dagbladet create hate!”, “YES to the blasphemy paragraph”


At 3 p.m. new demonstrations began at Universitetsplassen in Oslo against the publication of a caricature of the prophet Mohammed. About 4 p.m. a loud bang was heard by Egon restaurant at Plata in Oslo; it was probably from fireworks, says NRK’s reporter on the scene.

The demonstration appears to have been calm. It is unclear how many took part in the protest, but it has been reported that there were between 2,500 and 3,000 Muslim demonstrators out on the streets. For the main part they were men, it was said, but there were also some women and children.

“This is not a threat, but a warning”

“If this continues it will eventually be too late. Then we will have a 9/11 and a 7/7 in Norway. This is not a threat, but a warning,” said Mohyeldeen Mohammad, spokesperson for the group “The Volunteers”, in his speech.

“This is not a threat, but a warning,” he says. 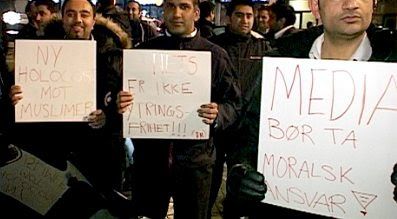 Signs, from left to right: “A new holocaust against Muslims”, “Incitement is not free speech!!!”, “Media should take moral responsibility!”


Several Muslim leaders and Islamsk Råd [Islamic Council] have urged young Muslims not to partake in the demonstration since they fear that the protest will not be the best thing for either Muslims or society in general.

According to the NRK.no reporter on the scene there is a steady stream of new people to Universitetsplassen after the beginning at 3 p.m.

“In the side streets there are emergency vehicles obviously ready to be used against the demonstrators. At the square the demonstrators have prostrated themselves on the pavement; they’re praying towards Mecca and saying that God is great.”

Despite the great numbers the demonstration proceeds calmly and quietly.

The Venstre politician Abid Raja understands the frustration amongst Muslims in Norway, and thinks that a lot of demonstrators will take part today.

“I can see that people are frustrated because of the publication of the cartoon,” says Raja to NRK.

He nonetheless encourages people to not demonstrate in order to avoid trouble and because he believes that there are dubious persons behind the demonstration.

“We are gathered here today to show our disgust against the caricature that Norwegian media have published as a part of the wars against Islam,” says the main person behind the demonstration today.

The activists demand an apology from Dagbladet.

After the appeals at Universitetsplassen the demonstrators have gone in a train to Jernbanetorget.

(See my earlier post for the image of Mohammed the Pig.)

2 thoughts on “The Taxi Drivers’ Revolt”