A year passes like nothing, and much of the bloom is off the romance between the American people and President Barack Hussein Obama. More Americans disapprove of the president than approve of him, and his Hope ’n’ Change agenda is largely in tatters.

But not in Europe! The Apostle of Light is still beloved in the Old World, and opinion polls in most Western European countries show that a huge majority of the populace support our president and believe that the best hope for world peace and prosperity lies in Barack Obama.

Yesterday our Swedish correspondent LN opened the Culture News section of the Svenska Dagbladet and read this:

Which translates approximately to:

Nearly a year after Barack Obama was sworn in, a musical about him is opening. “Hope — the Obama musical story” makes its world premiere in Frankfurt. 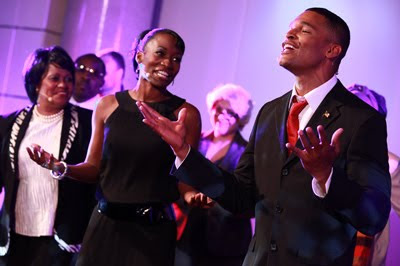 LN was so moved by the occasion that he collected some additional material and sent it to us. First, from Der Spiegel:

Wearing a knitted cardigan and crooning into his microphone, Barack Obama paces around the stage, wooing Michelle with a love song. In another number, now clad in a suit, Jimmie Wilson who plays Obama, struts up and down, clasping his mike and leading a euphoric gospel chorus of “Yes We Can.”

The venue Jahrhunderthalle in Frankfurt (Germany) will experience a sound it has never heard before: formed to a huge percussion ensemble, the audience accompanies US president Barack Obama on his successful way into the White House. The event organizer MOVE GmbH promises a double world premiere: at the premiere of “HOPE — the Obama Musical Story” on Sunday, 17 January at 8:00 pm, the audience will rhythmically participate on specially developed percussion chairs — for the first time ever worldwide. “Hope is the first interactive musical of a new generation”, says musical producer Roberto Emmanuele, CEO and creative director of Move GmbH based in Bad Soden. “This is an enormous sound and a great musical experience for the audience.”

We live a long way from Manhattan, so if this toe-tapping extravaganza ever comes to Broadway, we will probably miss it.

But even if it makes its way to downtown Keysville or Lovingston, I think I’ll give it a pass. I need to cling bitterly to my meager funds so that I can afford more guns and religion.