Michelle Malkin had a post yesterday about the Oregon vote to raise taxes. As much as I’d like to use her title, it won’t fit with the limits of our PG 13 blog. Let’s just say she wasn’t impressed with their decision and its long-term effect on Oregon’s prosperity:

Big Labor poured millions of rank-and-file members’ dues into a tax hike campaign in Oregon. It worked. The “wealthy” and the “evil corporations” will now be forced to bail out government schools and social services. Look for affected business owners to start Going Galt en masse.

Blogger PatriotUSA has his own essay on the subject. He’s not a happy camper. The poor guy lives in Oregon and now has to co-exist with this job-killing, union-saving, short-sighted decision by the Oregon Blues, i.e., the liberals who live in the urban areas and get their salaries paid by those taxes they just dumped on their fellow citizens:

The use of ‘scare tactics’ worked wonders here in my home state as once again, Oregonians proved how stupid they really are. The shame of this event is that these new taxes are no different than Oregon’s tax on tobacco to fund health care for children. Who are the majority of smokers? Not the wealthy or financially secure. Nothing more than a well disguised sales tax. 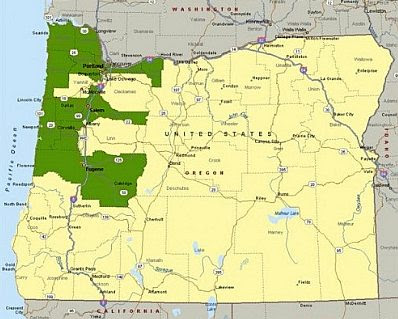 If one looks at a map of Oregon and how people voted, one notes that the large population areas carried these two measures to victory. Only 11 counties out of 36 passed 66 and 67. All on the Westside of the state where the liberal majority lives.

[Patriot says: The green areas are the counties that passed these measures, the rest of the state did not.]

Facebook is building a huge data center here just 20 miles away from I live. This is a positive in many ways, 35 full time, well paying jobs but at the cost of 45 million dollars in tax breaks and that is just the tip of the iceberg. The people who will be qualified for these high tech computer jobs will almost come from out of this area. Central Oregon is an intellectual wasteland for the most part. Now with 66 and 67 passing, new businesses will think twice if at all, if they even consider Oregon to start a business or relocating one here. Many businesses will leave now that these have passed.

I know of five small business owners who were waiting to see how the vote went. Now all five are leaving Oregon adding about 80 people to the unemployment rolls. They notified their employees today that their jobs are gone and the companies are all closing to relocate out of Oregon.

Of these five companies, three had been here in Oregon since 1971 and all are family owned, that paid their employees very well and provided excellent benefits. The owners are offering relocation assistance to those who may be interested

Patriot is a small government, low-tax kind of guy. Oregon, however, has been flooded in the last few years by California refugees fleeing a failed state. Unfortunately, many of them bring their California Big Tax ideas with them and now, as Michelle Malkin said, “Oregon is ummm…how do I put it?….Oregon is Pregnant with Possibilities, all of them bad.”

The same people who were dumb enough to elect the Obama into White House proved they have not learned a damn thing. All five companies asked me to not mention the company names to protect their employees and the companies during this most stressful time. I have honored their request. These are people I know and do some business with. It is just a shame. If I was in a position to leave Oregon, I most definitely would.

The liberals in Salem [Oregon’s capitol – D] haven’t had a balanced state budget in years. Any crisis comes up, heap on more taxes. So the rocket scientists in Salem (a Democrat governor and legislature and so is the house, they have complete control) passed the bills on 66 and 67 into law without the peoples’ approval.

Oregon has something called “the initiative process”. If enough valid signatures from registered voters are collected, then these measures (in this case, numbers 66 and 67) are put into a referendum, which will then have to be put to a vote by the people of Oregon.

That is what happened on January 26th. The people of Oregon voted to keep these two measures and now make them permanent laws.

Here is a juicy bit for you; the taxes do not start this year, 2010. They are RETROACTIVE back to January, 2009. Nice, huh? A double redacted punch in the gut from the Liberal trolls in Salem.

Those in favor of passing these two referenda got most of the money for their campaign – $6.9ml – from the unions. This means teachers, education [administrative bureaucrats – D], and state employees’ unions. What does that tell you? They constantly pushed ads in all media saying how schools would have to close, teachers laid off, and social services cut if these referenda, 66 and 67, didn’t pass. They used scare tactics for months.

They also made it sound as though only the so-called wealthy Oregonians would pay more in personal income taxes. If you make over $125,000 and you’re single or over $250,000 for married couples, they bite you for more money.[Evil rich people – D]

Businesses will be taxed on their gross total income. Even if a company posts a loss for that year, they still owe taxes on what they took in. The voters refused to see what will happen when corporations or companies have to pay more to do business. It’s the consumers who will pay more as companies raise prices to make up for the losses incurred by these new, higher corporate taxes.

You asked about the businesses I personally knew who are relocating as a result of this voter insanity. Three are small manufacturing firms, one is a car repair garage, and the last is a construction company. I promised not give any details about them so I won’t. This situation is hard enough for these people to live through as it is. Many of these people are my friends and losing them will be Oregon’s loss as well as my own.

The Oregonian has the full story. It says, in part:

…Campaign ads by supporters highlighted banks and credit card companies and showed images of well-dressed people stepping off private jets. They also hammered on the $10 minimum tax that most corporations have paid since its inception in 1931.

Those messages helped counter warnings by opponents that the taxes would lead to job losses, worsening the state’s 11 percent unemployment rate, and prompt wealthy residents to move elsewhere.

It sounds as though Oregon is ramping up to become a California mini-me. I’ll bet a lot of ‘yes’ voters were California transplants. You can take the liberal out of California but unfortunately he brings his California state of mind with him.

By the way, Ms. Malkin made a prediction and I’d like to explain it for our non-American readers:

So what is “Going Galt” you ask (you ask if you haven’t read Ayn Rand’s “objectivist’ novels, that is). Here is a good explanation, reworked for the 21st century from Ayn Rand’s ideas:

There are reports from across the country from young and old, of middle class wage earners cutting back hours or passing on career advancement to avoid paying higher taxes. They have no incentive to achieve greater earnings, only to watch a greater portion of their pie be consumed by others.

Many individuals, resentful of state tax and spend policies, along with economic difficulties, are turning to bartering or second hand purchasing to avoid paying cumbersome sales taxes, vehicle excise taxes, permits and licensing on home improvement projects and state and federal income taxes. The net result, over the course of the next few years, will be even less revenue than the already downwardly revised projections already being cited by the Obama administration and used as a reason to further increase taxes.

Unfortunately, it seems as if the only recourse the American public has to reclaim its country and foil the growth of government in scale and scope, is to “Go Galt” in its own way. By refusing to allow any more tax revenue than is absolutely possible to be taken and spent on government growth and dependence- creating government programs, the American individual, regardless of career status or creative ability now has the power to “Go Galt” in their own way.

For many Americans, long before the advent of Rand’s “objectivist philosophy” getting around the IRS (known fondly in some circles as the KGB) is a patriotic duty. The Jacksonian thread in our culture doesn’t trust “gummint” to do anything wisely. In their view, the more money you can hide from the “revenoors”, i.e., the villains who worked for the Internal Revenue Service, the more patriotic you were.

It was a man’s job to evade those tax collectors who roamed the hills and hollers (hollows) looking for moonshine stills. In the eyes of their descendants, it is still a honorable duty to hide as much of your income as possible from the prying eyes of the IRS. As the appetite of government grows, so does the underground economy. There is probably even a correlation between the level of unemployment and the increase in the amount of work done “off the books”.

It was true in Rome and it’s true today. Kill the middle class with taxes and you kill the larger economy. This appears to be a very difficult lesson to learn. The grasping unions of bureaucrats who will not make the necessary sacrifices now will be forced to make more draconian choices later.

Meanwhile the Galts among us will continue to flout the rules of the tax man. For many, it’s what any red-blooded American man (and woman) must do. The blues, i.e., the liberals, will continue to vote the rich into bankruptcy. In their eyes, these referenda were about “sticking it to the wealthy”. Unfortunately in our gummint schools, they don’t teach the basics of economic theory so we raise generation after generation of innumerate citizens who wouldn’t know compound interest if it bit them in the butt.

I don’t know how the underground economy works in Europe, but in America it thrives and it’s not an underclass phenomenon.