We carried a story or two in recent news feeds about the jamming of cell phones in the vicinity of a mosque in the Dutch city of Tilburg. The ostensible reason for this illegal jamming was to prevent ringing phones from disturbing prayers in the mosque, but it turns out that there was a little more to the operation than concern for the faithful at prayer.

Our Flemish correspondent VH has compiled an extensive report on the real reasons for the jamming along with some background on the mosque’s radical Salafist imam. First, his translation from BN DeStem: 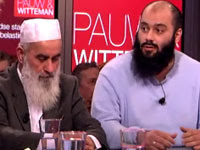 The [Salafist] Islamic Foundation for Education and Transfer of Knowledge (ISOOK) of the Tilburg imam Salam has been fined €650 [US $941] by the Breda court for disrupting mobile phone traffic (GSM).

The foundation had placed a so-called “cell phone jammer” in their mosque in Tilburg to ensure a “quiet prayer”. A cell phone jammer is a device that emits strong radio signals for a radius of tens of meters to make mobile phone traffic impossible. Its use is illegal in The Netherlands, because signals are transmitted at a frequency that belongs to the GSM providers.

Moreover, safety can be endangered, because it also blocks emergency calls to police and rescue services.

The police discovered the cell phone jammer after complaints from the neighborhood. The board of the foundation was fined €550 [US $797], but rejected it, since the board wanted to bring the case to court. When the case was heard in court two days ago, nobody from the foundation showed up. The ruling judge subsequently issued judgment in favor of the plaintiff. The judge spoke of a “nasty fact”. “There are other methods to ensure that people to turn off their mobile phone during prayer, by putting up a sign for example.”[1]

According to the local chapter of the VVD party [center-right], this is yet another example of the Salam mosque being very intolerant. The party wants the imam to be expelled and the mosque closed down.

[1] Note: This “quiet prayer” taqiyya was something the judge nor the local VVD politicians (“very intolerant!”) did not understand. From the “People Against Islam” blog:

In Antwerp there are various extremist mosques that use “GSM Jammers” to create a “no call / no sms zone” in and around the mosque. With such a GSM jammer one can block all GSM traffic within a relatively wide radius. Most sophisticated jammers can easily disrupt all mobile traffic seriously or even paralyze within a 5 km radius. The price for such devices ranges from 40 euros/dollars to a few hundred euros/dollars [example: UMTS / 3G / CDMA / GSM / PCS Portable Jammer, 3-20 m: 205 USD, 156 euros]. The hyping of these devices began in the U.S. and spread to western Europe.

The “GSM Jammer” is illegal in our country, but is used by several radical mosques in Antwerp to sabotage all kinds of informants and undercover officers from various police and security forces. Spies who are in the area around the mosques in this way may be prevented from communicating with their “controllers” in the police and security services. It is an additional tool for these extremists besides the numerous cameras mosques use to keep a close watch on the visitors. Snoops are not welcome!

“People Against Islam” has long been asking whether the mosques in our country are being monitored by competent authorities on their illegal use of GSM Jammers. We also believe that many cameras in the many Islamic “prayer houses” are used solely to spy on mosque visitors. Why are there not just cameras placed at the entrances to mosques? The dozens of cameras inside the mosque are of no use in terms of theft and prevention of burglaries. Incidentally, have you ever noticed cameras inside a church to spy on the faithful? I have not! A matter to think about!

VH supplies this additional background information on Ahmed Salam and the Islamic Foundation for Education and Transfer of Knowledge:

Ahmed Salam came to the Netherlands from Syria in 1989. He was involved with the World Muslim League center of Mohammed Cheppih (2000) and the Moroccan mosque Center for Cultural and Welfare Foundation in Tilburg. Also in 2000, he founded the Salafist Islamic Foundation for Education and Transfer of Knowledge (ISOOK). Later, in 2002, opened the Salam Mosque in Tilburg that led to concern among the local residents, especially because it was reported in the news that he preached that men should discipline their wives with physical violence, that men should not let their women work outside the house, because women become disobedient through it, and that Muslim boys and girls should not swim together. 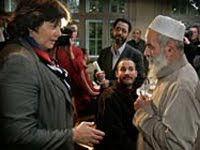 In November 2004 Ahmed Salam refused to shake hands of the then Minister of Integration, Rita Verdonk. Though a number of his colleagues were expelled, he was allowed to continue preaching. (The same Rita Verdonk was the one who later on declared the Dutch Citizenship of Ayaan Hirsi Ali to be invalid.)

In 2006 Ahmed Salam, who until then had lived off welfare benefits, preached to his flock that they should damage the Dutch state by, for instance, not paying taxes. The same year, Suhayb Salam, his Syrian-born son, caused a stir at the University of Eindhoven, not only by demanding for his “lecture” on Ramadan that ladies had to sit in the back and the men in front, but also by having the students agree with him.

Father and son Salam made the headlines together with the niqab petition against a possible burka-ban, and also in 2007 with the demand that, during an interview on a TV show in response to the meeting with the mayor, no wine be allowed on the table. The son Suhayb Salam later that year caused a stir by walking out of a TV show (Bimbos and Burkas, wmv file) because a woman in a miniskirt came into the picture. “I do not wish to see this, and miniskirts and have nothing to do with emancipation,’’ he said.

In the studio one of his wives, Samira Dahri, was also present (the other one is in Syria), wearing a burka. This Samira Dahri also made the headlines: as a teacher at a school in Utrecht suddenly she no longer wanted to shake hands with her colleagues (and the Commission on Equal Treatment approved it).

In 2008 Geert Wilders wanted to invite three Salafist imams for an open discussion on his film Fitna: Fawaz Jneid of the As-Soennah Mosque in Den Haag, Mahmoud el Shershaby of the El Tawheed Mosque in Amsterdam, and Ahmed Salam of the mosque in Tilburg. “These are imams with whom I can conduct a strong debate,” Wilders said. But the imams refused. They would only debate under a number of outrageous conditions the PVV did not want to meet.

The Islamic Foundation for Education and Transfer of Knowledge (ISOOK) of the Salam family has been described by the AIVD [Dutch Intelligence Service] as an organization that disseminates anti-integration messages, and the imam Ahmed Salam as a “radical”. The AIVD suspects that there are around 30,000 youngsters in the Netherlands sensitive to these ideas and the police of Tilburg had also expressed concerns about “anti-integrative behavior of the imam and his son Suhayb Salam Ahmed Salam”.

Research agencies that have been assigned by the (local) government to investigate the problems and provide insight to politicians are still issuing reports with conclusions like these:

“It is a risky matter to go against the common idiom, and to plead for a more reasoned and cautious use of the concepts of radicalism, and radicalization in the public debate, although that would largely take out the sting out of the fear these concept would otherwise carry with them. […] To connect radicalism necessarily with threats or risks to safety is not only incorrect, but also leads to a discourse in which hostilities are ingrained. […] We [the researchers] consider radicalism as the result of a process of alienation and removal from the established society and its system of values.. Such alienation develops from a breach of trust, via a legitimacy conflict to a legitimacy break. That process is under the influence of socio-economic and ethnic or cultural position of the individual who is radicalizing. […] The threat of radicalism, and radicalization does not come forth from the range of ideas [Islam]. Therefore it is striking, as we repeatedly note in this study, that the image forming of the mosque in Tilburg-North and in particular of the person of Imam Ahmed Salam and his closest followers, in the media and in public AIVD reports the relationship is made between the body of thought [again: Islam] and radicalism, and potential social and security risks. […] The debate on ‘the multicultural drama’ has continued in a still uneasy debate about the relationships between integration, participation, equality and multicultural policies, strengthening of the discourse and [on the other hand] the neo-nationalist [sic], or rather populist reflex of a tackling it the hard way.”

The two “researchers” who wrote this Tilburg report for the city government, Henk Moors and Menno Jacobs, the latter in the ex-University department Woman Studies also worked for the same research bureau, (IVA Beleidsonderzoek en Advies) on the policy study for the troubled city of Ede in the Netherlands, where the immigrant Muslim population lives in a “state of war” with the local Christian population:

Quote: “Culture and faith-related ideas and behaviors do not form major social risks in the municipality of Ede. […] The City Council is pleased to assent to the opinion of the researchers that any tensions between the groups of people are not related to religion or culture as such. […] The researchers [Moors, Jacobs] recommend an approach to the problems with a socio-economic and socio-cultural perspective.” And: “[…] all the publicity about troublemakers and radical Muslims leads to prejudice and discrimination.”

8 thoughts on “Jammin’ the Jahiliyya”