One Muslim Nation Is Sending Help for Haiti After All

Some of our readers pointed out the omission by the Sydney newspaper of any assistance from Israel. Commenter Ashan helpfully gave us a link to Israel’s efforts:

An Israeli aid delegation landed in the Haitian capital, Port-au-Prince on Friday night. Around 220 soldiers and officers are in the delegation, including 120 medical staff that will operate an emergency field hospital. An IDF plane loaded with equipment was expected to land shortly after the staff.

Jewish organizations – including the American Jewish World Service and the Joint Distribution Committee – are working with partners on the ground in Haiti. The JDC is working with Heart to Heart to bring medical aid, equipment and services to victims of the earthquake. It also is working with the IDF’s medical corps, and purchased equipment including infant incubators and orthopedic devices.

Chabad sent four trucks of vegetables, as reports came that food and water were scarce and looting had begun. “We see people on the road, asking for food,” Rabbi Shimon Pelman, Chabad’s emissary in Santo Domingo, told The Jerusalem Post by telephone Friday he traveled by car from the Dominican Republican to Haiti…

Regarding the omission of Israeli aid on the list compiled by The Sydney Morning Herald: until our readers in Oz email or comment on this, let’s presume the mistake was simply that: an inadvertent omission. The world is paranoid enough without adding to the problem.

For that matter, should you see mention of a Muslim country sending aid, please let us know.

Remember when Saudi Arabia said it was going to need financial aid in this ailing economy? The world snickered.

Now comes Haiti’s horrific earthquake. The world is putting money, supplies, and manpower (not to mention dog power — cf China) into the pot to help Haiti recover from this disaster.

But look at the list (below the fold). See any Muslim countries? I don’t either. Haiti is just a bunch of miserably poor infidels anyway. 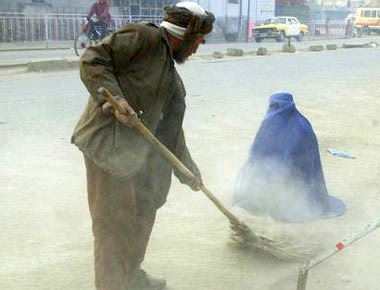 The list of countries sending aid is below the fold. It includes Cuba, for heaven’s sake.

But there’s not a Muslim entity in sight. This is because they’re so poor, you see. Poor Saudi Arabia, for example. Lots of money for jihad but not a penny for infidel suffering. I guess they have their own trash to clean up?

I don’t believe in Hell. If there were such a place however, I know a particular group who’d have their own special circle in The Inferno, one reserved just for them…which is just as well since they don’t mingle with the dirty kuffar, even amid the fire and brimstone.
– – – – – – – – –

From The Sydney Morning Herald:

The USS Carl Vinson aircraft carrier was to arrive later in the day with destroyers and more Coast Guard ships were en route and 5000 troops on standby.

50 Chinese soldiers, who brought three sniffer dogs with them, and a rescue team, plus 20 tonnes of aid.

Willing to match its citizens’ donations up to a combined total of $C100 million ($105 million). Ottawa also readied two warships, helicopters and planes with supplies, as well as a large relief and rescue force. Rescue team and relief supplies.

Close to $US10 million, rescue team and relief supplies.

16 thoughts on “Islam Entities Take But Never Give”