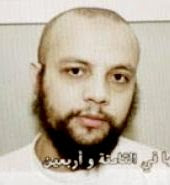 Mohammed Bouyeri is a Dutch-born Muslim of Moroccan descent who murdered Theo Van Gogh on the streets of Amsterdam just over five years ago.

Bouyeri, as you may recall, was less than repentant about his crime after he was caught and charged, and was unabashed in his insistence that he did it for the sake of Islam. Here are some quotes from the defendant at his trial:

After shooting the victim and nearly decapitating him, Bouyeri used a knife to impale five pages of text on the chest of the corpse. One of the pages contained verse written by the killer himself, entitled “Drenched in Blood”:

So this is my final word…
Riddled with bullets…
Baptized in blood…
As I had hoped.
I am leaving a message…
For you…the fighter…
The tree of Tawheed is waiting…
Yearning for your blood…
[…]
For the hypocrites I have one final word…
Wish DEATH or hold your tongue and …sit.
Dear brothers and sisters, my end is nigh…
But this certainly does not end the story.

This same Mohammed Bouyeri — unrepentant, forthright in his insistence that it is a moral duty for Muslims to kill infidels — will be called by Geert Wilders as a defense witness when he goes on trial next month for defaming Islam.

As our expatriate Dutch correspondent H. Numan points out, this is a brilliant move on Wilders’ part — the Dutch government is hardly likely to welcome additional polemics from Mohammed Bouyeri, which can only remind the Dutch people of why Mr. Wilders is right about the Islamic danger.

On the 20th of next month Geert Wilders will have to defend himself in (a kangaroo) court. Today Wilders came up with a brilliant defense: he’ll have the murderer of Theo van Gogh appear as witness.

Mohammed Bouyeri must appear if summoned as a witness. If necessary he can be transported under force to the (kangaroo) courtroom. By law he is required to answer questions, unless those questions would incriminate him. To remain silent is punishable by law.

“I doubt if this will impress him very much (he is doing life — and life in Holland means life), however, I don’t think it unlikely he wants to talk,” according Mr. Moszkowicz, Wilders’ defense counsel.

He is just one of the many witnesses the defense will call to the stand. “He is living evidence that Islam is the inspiration for violence,” according to Wilders.

For more on this story, see this article in De Telegraaf (in Dutch).

6 thoughts on “The Bouyeri Defense”