In describing their interactions with Africa over the last two centuries, Europeans have veered between two extremes. At the one pole would be their original understanding of the African as an illiterate heathen savage, to be brought to civilization and Christianity by the beneficial efforts of the white man. At the other extreme is the modern vision of the European as the rapacious, greedy, evil exploiter of the noble and innocent African.

Through all the Eurocentric noise about Africa, it’s often hard to get a sense of what Africans really were (and are). Yet during the first half of the 19th century — after the exploration of the Dark Continent had begun, but before the “scramble for Africa” got underway in earnest — a number of Europeans who visited Africa attempted to record what they saw with accuracy and lucidity.

Take, for example, this description of the Bosjesmans (also known as Bushmen) by Sir John Barrow (1764-1848): 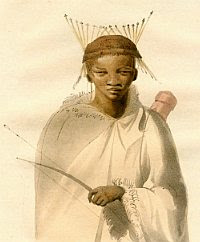 All the men had the cartilage of the nose bored, through which they wore a piece of wood or a porcupine’s quill. Whether they are considered as to their persons, their turn of mind, or way of life, the Bosjesmans are certainly a most extraordinary race of people. In their persons they are extremely diminutive. The tallest of the men measured only four feet nine inches, and the tallest woman four feet four inches…. [T]hey are known in the colony under the name of Cineeze, or Chinese Hottentots. Their bellies are uncommonly protuberant, and their backs hollow; but their limbs seem in general well turned and proportioned. Their activity is incredibly great. The klip-springing antelope can scarcely excel them in leaping from rock to rock; and they are said to be so swift, that, on rough ground, or up the sides of mountains, horsemen have no chance in keeping pace with them…. The Ethiopian soldiers, when called upon to defend themselves, or to face an enemy, stuck poisoned arrows with a fillet bound round the head, which, projecting like so many rays, formed a kind of crown. The Bosjesmans do exactly the same thing; and they place them in this manner for the double purpose of expeditious shooting, and of striking terror into the minds of their enemies…. Their bows are remarkably small; and, in the hands of any one but a Bosjesman, would be entirely useless. From the earliest infancy they accustom themselves to the use of the bow. All the little boys who came to us at the kraal carried their bows and small quivers of arrows. A complete quiver contains about seventy or eighty…. [Vol. 1, pp. 233-34, 239, 243]

The Bosjesmans resided mainly in that region of Africa controlled by the Dutch settlers, the Boers, who over the past fifty years or so have gained a reputation as the cruelest and most evil of the white exploiters of Africans.

But how justified is this version of the Boers? Our Flemish correspondent VH ran across an account of an anti-slavery law from the early 17th century instituted by the Boers to protect the Bosjesmans:
– – – – – – – – –

Quite a while ago I stumbled upon the text below in “Original Matters contained in Lieut.-Colonel Sutherland’s Memoir on the Kaffers, Hottentots, and Bosjesmans of South Africa” (Cape Town; Pike & Philip, MDCCCXLVII (1847); pp.53-54).

Although it was followed by the note: “But Hell is paved with good intentions,” it may well have been a remarkable law for the 17th century, and for the Dutch (Boer, which means “farmer”) colonizers/immigrants in the South African region.

The book is available online at Google Books:

It is quite evident that they (the Bosjesmans women and children) would have been at once declared slaves, and, indeed, placed thus under task-masters who were themselves living far beyond the control of the laws; it is a distinction without a difference. The following admirable Dutch law alone prevented, in all probability, the local government from declaring them to be slaves:— “The aborigines shall be undisturbed in their liberty, and never enslaved; they shall be governed, politically and civilly, as ourselves, and enjoy the same measures of justice. Good rules shall be made for teaching them, and especially their children, the truths of religion and the usages of civilized life; and care shall be taken to withdraw them from heathen customs, and from indolence, the mother of want, to the cultivation of the soil, and to such habits as their condition and capacity may bear,” — Dutch Law, A.D. 1636.

This excerpt is a reminder that the relationship between Europeans and their colonies was more nuanced than the postmodern anti-Orientalists would have us believe. Many — if not most — Europeans who ventured into the heart of darkness believed it was their Christian responsibility to treat the heathen with solicitousness and compassion. It was evident to them that God had created the colonial races as the childlike inferiors of the Europeans, and it was their duty as good Christians to act as wise stewards of their charges, aiding and protecting them as they brought them into the light.

We find it easy now to look back on such attitudes and sneer, but it’s important to remember that these were enlightened and progressive ideas of their day. The slave-traders who plied the coastal markets and bought up shiploads of human cargo were the brutal exploiters, but the farmers who settled the interior did so with the intention of doing what was right in the eyes of God.

And this law was enacted in 1636, almost two hundred years before William Wilberforce spearheaded the great movement to end the slave trade. Meanwhile, Muslim Arabs had been enslaving black Africans for nearly a thousand years prior to that time, and would continue doing so for another three centuries. Yet the first European settlers in southern Africa were the ones who passed a law forbidding slavery.

We all know the grim denouement of the story of European involvement in Africa, but it’s sometimes useful to look at events from the point of view of the people who were actually involved at the time, people who had no idea of the multicultural dystopia that would eventually develop out of the ruins of European colonialism.

One thought on “Reconsidering Africa”