Regular Gates of Vienna readers are familiar with Elisabeth Sabaditsch-Wolff, who recently gave a series of exemplary Counterjihad presentations at the OSCE Human Dimension roundtable in Vienna a few weeks ago. 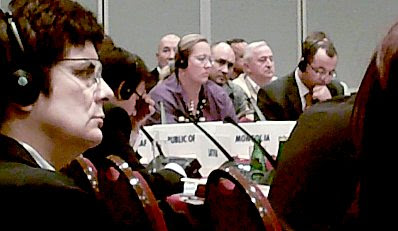 Those who speak out prominently against Islamization sooner or later face the wrath of the dhimmi establishment. Anyone who sticks his head up over the parapet risks having it shot off.

And so it is for Elisabeth. She dared to speak the truth about Islam. Now, like Geert Wilders and hundreds of other Europeans, she has run afoul of her country’s hate speech laws, and faces prosecution for what she said.

Elisabeth Sabaditsch-Wolff was interviewed today by S.M. Steinitz for profil (Austria’s equivalent to Time or Der Spiegel). Many thanks to Jihad Watch for publicizing Elisabeth’s case:

“I Am Against Dialogue”

A criminal complaint is being filed against Elisabeth Sabaditsch-Wolff for “hate speech” under Austrian law, essentially the same thing that Susanne Winter was convicted of early this year.

Elisabeth gave a presentation about Islam at an FPÖ-organized seminar, and said some of the usual things that anti-jihad advocates say when they talk about Islam. A left-wing magazine, which had planted someone in the audience, caused charges to be brought against her at the same time as they publicized it in their magazine.

Elisabeth held the controversial Islam Seminar at the FPÖ-political academy. Charges of defamation of a religious group have been filed against the daughter of a diplomat. This is her only interview in which she explains her views.

Mrs. Sabaditsch-Wolff, are you afraid of Muslims?

No, I am afraid of political Islam, which is massively gaining influence in Europe. That is what I am against.

What is your goal?

I want to preserve Europe and its democratic and secular values.

What bothers you about the Islamic way of life?

Do you see the need for that?

There are powerful groups who are working towards the Islamization of Europe. That is a fact. What can we gain from closing our eyes and ignoring this? Even Libyan leader Muammar Ghadafi says: “There are signs that Allah will grant victory to Islam in Europe without swords, without guns, without conquest. We don’t need terrorists, we don’t need homicide bombers. The 50+ million Muslims [in Europe] will turn it into a Muslim continent within a few decades.” A head of state confirms what our politicians deny. What else has to happen until we finally get it?

There are people who see the growth of Islam in Europe as an opportunity for a completely re-engineered pluralistic society.

The vision of a pluralistic society does not withstand a reality check. Show me one example where this has been a success. Wherever Muslims have been given the opportunity for self-organization they have established parallel societies. See Berlin-Kreuzberg, see Lyon. See also Great Britain, where parts of shariah have been implemented.

Do you really think that Austrian culture is endangered?

I see signs of an erosion of our way of life. In large cities massive changes are evident in the streets. There are discussions about a ban on teaching the Turkish sieges of Vienna; St. Nicholas is banned from visiting children in [public] kindergartens.

And you want to change that.

Yes, very much. But why is that so bad? In Bhutan, the king is applauded because he allows only a certain number of foreigners into the country. He prescribes a certain dress code and mandatory cultural events. Bhutan is a small country that wants to retain its cultural identity in a globalized world. Austria is also a small country with similar challenges. Why is the one country commended and the other berated?

According to NEWS, you defamed Islam. That is why NEWS has filed charges citing defamation of religion. Your reply?

One can report anyone to the authorities. I am not guilty of defamation. And even if some consider my words harsh, I definitely did not make them in a public forum since the seminars were held before a group of people who registered beforehand.

You are accused of making the following statements, among others: “Muslims rape children because of their religion”, or “Mohammed enjoyed contact with children.” Why the polemics?

This is a clever strategy. You and all the others who are now crying wolf are locked in a choice of words. As a result you are able to maneuver yourselves away from the main point. It is a fact that Mohammed married a six-year-old at the age of 56. To this day men in Islamic countries view this as legitimizing marriage to a minor, thereby causing rape and life-long trauma. This is the problem we need to address, and not how circumscribe this bitter reality.

Are you afraid that these customs will become part of Europe?

There are groups who have this goal. In every Islamic system you find that human rights of young girls are in grave danger. Look at Saudi Arabia. Look at the former socialist South Yemen. When Khomeini came to power he lowered the minimum age for girls to get married to nine years.

You are being accused of Islamophobia. Does this bother you?

A phobia is an irrational fear. My worries are not irrational, but justified. One of these days our politicians will have to recognize this fact. People like me are not right-wing xenophobes.

But what are you?

We are people defending the principles of freedom and equality in a secular society. I criticize political Islam and its political manifestations. No democratic country can take this right away from anyone.

Why do critics of Islam nearly always use polemics?

And what [if not polemics] did the article in NEWS use? There are comments about my body, there is ridicule about how I eat. Sexist attacks below the belt against women making unpopular statements are a manifestation of a male-dominated system. There are many critics of Islam. However, it’s always women like Brigitte Bardot or Oriana Fallaci who are attacked below the belt.

Leading politicians have sharply criticized your seminars. Are they all members of a male-dominated system?

These politicians do not know the contents of my seminars. All they know are out-of-context quotes from an article in a glossy magazine. I also find the reaction of these politicians strange. They get away with much worse.

SPÖ secretary general Laura Rudas, who calls for a public ban of the headscarf. I would not do something like that.

On the other hand, you are being compared to Susanne Winter (FPÖ). She was convicted of defamation because she accused the prophet Mohammed of pedophilia.

I do not want to be compared to Susanne Winter. There are no similarities between us. She is an active politician, she acts in a public forum. I do not.

You hold your seminars for the FPÖ-Political Academy.

But I am not politically active. I am also not a member of FPÖ. What I do is offer seminars on the topic of Islam and I can be booked. The FPÖ academy did just that. I do not want to comment on Susanne Winter’s statements. But in my opinion she does not know much about Islam.

In what way are you qualified to hold these seminars?

I have an M.A. in Diplomatic and Strategic Studies. I spent part of my childhood in Islamic countries, worked and lived there. I have personally experienced life in Islamic societies and I see evidence of a trend towards the Islamization of Europe.

How do you view yourself?

I am a mother and a feminist. I want my daughter and my niece to grow up in freedom and dignity. I want the same for all Austrian citizens, and that includes Austrian Muslims.

In your seminar you do not distinguish between Muslims and Islamists.

Oh yes, I do. I do that because I know how much Muslims worldwide are suffering under the Islamic yoke. I say that in all my seminars, only NEWS did not bother to quote that. Why do think so many Muslims try to escape from Islamic countries like Iran and Afghanistan? Because life there is unbearable.

So you want to liberate Muslims from Islam?

Muslims have to liberate themselves; from this static and tenacious Islam that is hellbent on following norms from the seventh century. The result is that wherever there are Islamic societies there is no progress, but steps backwards, especially in the realm of human rights and democracy.

But isn’t the referendum on the minaret ban in Switzerland also a step backwards?

The result of the referendum is the best proof that politicians should finally take the Islamization of Europe seriously.

What do you think about the reaction from the Islamic world regarding the referendum?

The Islamic world leads in discrimination against religious minorities. Christians are persecuted and discriminated against in all Islamic countries. You have to remember that the Christian culture is not one that immigrated or is foreign; it is indigenous. There is a complete ban on building churches in Turkey. And now Erdogan speaks of discrimination against Muslims in Switzerland? Where are Muslims being discriminated against in Switzerland? The European elite allows the Islamic countries to walk all over themselves, all the while bowing down to them.

Are you in favor of a ban on minarets in Austria?

I will not answer that. Instead, I will quote the now so agitated Turkish prime minister who once said, “The mosques are our barracks, the domes our helmets, the minarets our bayonets and the faithful our soldiers.”

Do you feel misunderstood?

Above all, I believe that my rights are being curtailed. Currently I do not notice that I have freedom of speech or opinion.

Haven’t you yourself strained this right?

No, I don’t believe I did. Above all, I did not speak publicly. What is all the commotion about?

But now it has become public.

I only say out loud what others are thinking. But these concerns are not taken seriously.

Are you against a dialogue with the Islamic world?

I am against a dialogue with political Islam. I am, however, in favor of a broad discussion about human rights and personal freedoms.

You criticize Islam as discriminating. What do mean by that?

Just one example: In Islam non-Muslims are called kuffar, non-believers. These infidels are all defamed and not considered equal. This is offensive. Where are the protests?

What are your negative experiences in Islamic countries?

People in these countries are continuously restricted. This leads to aggressions and reporting people to the authorities and other absurd situations. For example, a (Coptic) member of the Austrian embassy in Kuwait was verbally abused at the post office because he was mailing Christmas letters. It was Ramadan and he must not eat or drink publicly. He said, surprised, “But I am not eating!” “Oh yes, you are. You are licking off the adhesive part of the stamp.” This is daily routine in an Islamic society.

Can you really use a single occurrence as an example?

I can tell you hundreds of similar single occurrences. This story is not a single case, but a social program.

Will you continue with your seminars?

Yes. There are requests coming in from all over Austria. I will continue to defend my right to freedom of speech. I will not be gagged.

Elisabeth Sabaditsch-Wolff, 38, is the daughter of a retired diplomat. She spent parts of her childhood during the Khomeini Revolution in Iran. She later spent time in Iraq and Kuwait. In 1990, she and other Austrians were held hostage during the Iraqi invasion of Kuwait. She was employed at the Austrian embassies in Kuwait and Libya. From 1995-7 she was a member of the cabinet of the then-vice-chancellor, Wolfgang Schüssel. Sabaditsch-Wolff represents the Citizens’ Movement Pax Europa on an international level.

11 thoughts on “Fighting a Hate Speech Charge in Austria”