A German-Iranian ex-Muslim gives her opinions about the Swiss minaret ban, and its meaning in the larger context of creeping sharia. Thanks to reader JLH for translating the interview from the Leipziger Volkszeitung, November 30, 2009:

An interview about the construction ban on minarets in Switzerland with Mina Ahadi, Chair of the Central Council of Ex-Muslims:

Question: What do you say to the ban on minaret construction in Switzerland? 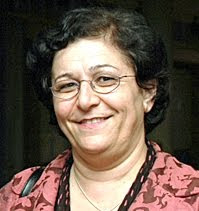 Mina Ahadi: I welcome the decision. It really is about minarets. The rejection of minarets is actually a rejection of Islamism, Sharia and the requirement for wearing a hijab. The minaret is merely a symbol of a justifiable fear of political Islam. So it is good that Swiss citizens have intervened in this situation and said a clear “No.” I would also like to see a broader discussion in Germany about female genital mutilation and the rights of children.

Q: Critics of the vote are afraid it will amplify xenophobia. How great a danger is there?

A: That would be a simplistic and false interpretation. In Switzerland, it is not about fencing Muslims off. Rather, it is a protest against the attack on human rights in the name of Islam. Many Muslims, too, no longer feel that they are represented by Islamic political organizations. Many are resisting the suppression that has been decreed for them. Perhaps this vote will give them the courage to free themselves from it.

Q: Many people now fear he reaction of the Islamic world. What is in store for Switzerland?

A: Naturally, there will be aggressive reactions to Switzerland in the Muslim societies and the Arab world in general. The first threats have already have already been made. It suits the culture of the perpetually offended to take on the role of the victim and decry the suppression of Islam in the Western world. That just shows that this is about politics, not religion. We really hope that secularism and the human rights of the West will continue to be defended.

2 thoughts on “A Justifiable Fear of Political Islam”