Yet another magazine has fallen under the spell of Obama. This fact makes our reader and tipster REP most annoyed:

Which is worse with respect to the picture below?

(a) That our President is seen with a GQ getting into a car, or,
(b) that it is the edition with him on the cover? 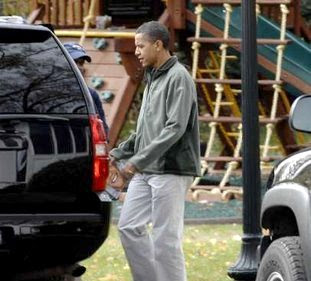 Gee, REP, at least he didn’t use it to hide his face, hmmm? Might have been too obvious, maybe?

Now that you mention it, this photo reminds me of the girl who shows up at work sporting a big fat diamond engagement ring on her left hand. You know, she flashes it persistently, until you’re forced to ask her about it. In an offhand voice that rises as she speaks she says, “oh, this little ol’ thing? Sweetie, I’m engaged to be married!”
– – – – – – – – –
Obama and the media are a twosome after all. They’ve been in bed together since the Senator began his campaign for president. Simply consider the GQ cover one of the vast numbers of baubles given him by his besotted media, their legs tingling with excitement.

Just wait till Time puts him on the cover as “Man of the Year”. And have you thought about the the forests that will go into making the countless magazine covers for his ceremony at the Nobel Peace Prize coronation? Ah, REP, we have miles and miles of shiny images to go before this is all over.

Isn’t he the guy who has mentioned himself over 12,000 times in his speeches?

Ye gads! Don’t tell me someone’s been keeping track? Does this 12K total take into account his campaign or is it just since the inauguration last January? I’ve grown accustomed to the sound of him listening to himself. He’s a media creation; you can hear the echoes of the MSM in his inflections and intonations. Some linguist is going to have great fun in fifty years or so.

The galling thing is that with the many problems facing our country (for starters – Afghanistan and troops – he still hasn’t announced his decision) he takes this heavy reading for the long weekend?!?!

A big seekrit: the GQ cover is hiding the Penthouse Michelle has forbidden him to read. Shhh…

I began telling people on January 22 that this would be the worst-run White House in history. Anybody still think I was overstating the matter?

Well, nobody ‘round here thought you were wrong. But the “worst” anything can have a fascination all its own. It would be more fascinating, of course, if BHO weren’t so hell-bent on destroying our economy and our future.

By the way, REP, you forgot his infamous golf games. This president has no gravitas but who would dare tell him? Please, let’s not break his heart. Incompetence is bad enough. A broken-hearted incompetent would be downright dangerous.

9 thoughts on “Obama Makes the Cover of GQ”