Most people who followed George W. Bush’s seven-year “war on terror” will remember Karen Armstrong, the special assistant to the president who was notable (or notorious) for visiting Saudi Arabia and other Muslim strongholds with a syrupy message of ecumenical peace ’n’ love. She could always be found on the front lines of American outreach to “our Muslim friends”.

The end of the Bush administration did not dampen Ms. Armstrong’s enthusiasm for all things Islamic. In fact, she says she considers Geert Wilders to be a “fascist”. How do you like them apples, Geert?

Our Flemish correspondent VH has translated an article from De Volkskrant about Karen Armstrong and her latest compassionate initiative (some of the quotes were translated into Dutch and then back into English, so they may not be verbatim versions of the originals): 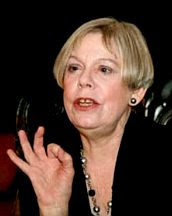 All religious and spiritual traditions have compassion as a its basis, says Karen Armstrong. Is that so? And what about Islam?

“The principle of compassion or empathy is the basis for all religious, ethical and spiritual traditions, with this an appeal is perpetually made to us to treat others they way we want to be treated ourselves.”

Thus begins the Charter for Compassion, an initiative by the writer Karen Armstrong, which was presented on November 12 in different cities of the world. In Amsterdam the Charter was read by Awraham Soetendorp in the presence of among others [Amsterdam Mayor, PvdA, Socialist] Job Cohen and Tariq Ramadan. Soetendorp and Ramadan are members of the Council of Conscience, which consists of people of different ideological backgrounds who support the charter. These include, for example, Desmond Tutu and Ali Gomaa, the Mufti of Egypt.

The charter has a catchy beginning. But is what it says true? Take Islam. Is there any indication in the Koran or in practice that compassion is the foundation of Islam? No. The golden rule can only be applied if you base it on the equality of people, if you find that another person is similar to yourself. In Islam that principle does not exist. The testimony of a woman is worth less than that of a man.
Unbelievers are avoided, subdued, or must be slain. The words of Jesus, which can be found in Luke 6:31 “And as ye would that men should do to you, do ye also to them likewise” is in not any form to be found in the Koran, no matter what Armstrong and Wikipedia want to make us believe. Islam does not know the golden rule.

Even more so, the Koran explicitly rejects compassion in religion. In Sura 24:2, which is about the flogging of the adulteress and the adulterer with one hundred lashes, it is stated as follows: “and have in God’s religion no compassion for them, if you believe in God and the last day. With their punishment, a group of believers must be present.”

It is a totally different way of thinking than that of Jesus, who said, as can be found in John 8:3-11: “If one of you is without sin, let him be the first to throw a stone at her.” What possesses Armstrong to seek her salvation with the Mufti of Egypt and Tariq Ramadan to promote compassion in the world?

Well, she is afraid. at least I understand that from an interview with her I found on the website bruggenbouwers.com [bridge builders]. When asked why the golden rule and the Charter for Compassion are so badly needed, she replied: “I seriously believe that we have a very violent future ahead if we do not apply that golden rule, not only to persons around us, but also to peoples and nations.”

“We live in a century in which small unhappy groups possess a destructive power that was previously reserved for nation-states. 9-11 will retroactively seem a row during a Sunday-school picnic, compared to what is coming. Unless we act according to the golden rule. We will have to understand one another, worldwide. We need to perform an intellectual effort. And thus not just rely on a newspaper article or TV program and then immediately say: this is my view of Islam.”

What does that actually say? That “we” must change our view of Islam, because otherwise even worse things will follow than 9-11? We just have to believe that compassion is the foundation of Islam, otherwise we will be destroyed.

By whom or what, she does not mention, but the reference to 9-11 suggests that she refers to Muslims. And if our destruction will occur, then that’s our fault. For we should have looked into Islam and seen how beautiful and good it is.

Now the disaster which is going to take place can still be reversed, if I understand Armstrong well. Thus it is intended that we knowingly, despite newspaper articles or television programs, accept from her that Islam is about compassion. And when we accept that, we have to meet the whole world, including the Islamic world, with compassion.

This, according to Armstrong, means in practice that “you should not speak no evil about each other in the public life, not about your ex-wife, but also not about a country with which we are at war. That must not be done; speaking evil is a denial of our humanity.”

Now I do not know exactly what she means with speaking evil, but there are things like genocide, terrorist attacks or the hanging of homosexuals, where a reasonable person in any case should not speak any good word about. Must I have compassion with the regime of Iran? Do I deny my humanity when I say that I find perpetrators of honor killings reprehensible?

According to Armstrong I should. Although, from the interview it shows that the writer herself does speak without compassion for some people, and even speaks actual evil about them. About Geert Wilders for example. Who according to Armstrong is “some kind of a fascist.”

“[…] I find it frightening that he always portrays Islam as an evil religion. It makes clear that we have learned nothing from the Hitler years, from the horrors of the Nazi camps.”

How compassionate. Everyone knows Wilders in the Muslim world, she ominously adds. With this she is suggesting that if a new 9-11 were to announce itself, it would be Wilders’ fault. And also the fault of the press, which according to Armstrong never pays any attention to liberal Muslims like the previously-mentioned Grand Mufti of Egypt. The guilt of the West.

What more does Armstrong wants with her Charter for Compassion? She hopes “that people will feel empowered and become sensitive to language that lacks compassion”. That has already failed, I can tell her. The presentation of the Charter for Compassion took place in the “Moses and Aaron Church” in Amsterdam. The program said it would be completed by the girls choir of the Muslim community school El Kadisia Amsterdam-Slotervaart. How sweet, how lovely, it seems almost to be Christmas already. You must be a real sourpuss if you do not find this an innocent event.

Arabist Simon Admiraal pointed out to me that it makes sense to try to find out what El Kadisia actually means. And he was right. El Kadisia is a battle in 637. And not just a battle. It was the decisive battle in the bloody conquest of Persia by Islam. A school in Amsterdam Slotervaart is named after that. “El Kadisia” language is without compassion. It is the language of Islam. And nobody who recognized that, and nobody on that day of great compassion bothered.

VH adds longer versions of a few Karen-Armstrong quotes from the interview:

Karen Armstrong: “The Charter bases itself on the golden rule that can be found in the heart of all morality and all religions: treat others like you want to be treated.”

Karen Armstrong: “You journalists always ask me: where are the liberal Muslims, why do they say anything? Sometimes I think I live on another planet, because there are plenty: every day I read their e-mails and websites.”

Interviewer: “You undoubtedly will blame Geert Wilders’ naïveté.” Karen Armstrong: “He is not the only one. But I find it frightening that he always portrays Islam as an evil religion. It makes clear that we have learned nothing from the Hitler years, from the horrors of the Nazi camps. Wilders is a kind of fascist, fascism is not dead.”

12 thoughts on “Islam and Compassion”