Two separate sets of culturally enriched riots broke out in France over the weekend.

Muslims staged a violent riot in Marseille after a soccer match between Egypt and Algeria — no kuffar were involved. I may have more to report on that one later. 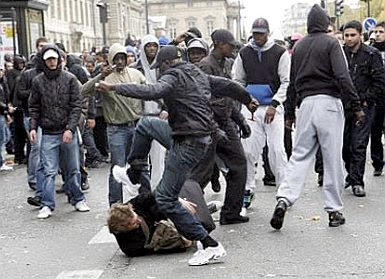 An unconnected incident occurred in Paris near the Eiffel Tower, prompted by the somewhat ill-advised promotional actions of a Belgian company. Our Flemish correspondent VH has translated a report from Nieuws.be: 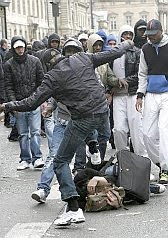 A publicity stunt in which the Belgian company Rentabiliweb wanted to distribute money near the Eiffel Tower degenerated into violence Saturday as the event was canceled. More than seven thousand people showed up.

The company was startled by the size of the turnout and canceled the stunt at the last minute. Many youths then violently protested. A car was damaged, a photographer was beaten and a police officer had apples and oranges thrown at him.

A dozen people were picked up and nine of them were subsequently arrested. The French Ministry of the Interior has announced that it will file a complaint against the organizer, who had not received prior permission from the authorities.

To promote their website Mailorama.fr, the Belgian office of Rentabiliweb [the main branch of Rentabiliweb is based in France] had decided to hand out €40,000. Despite the rain and the cold, hundreds of people gathered during the morning at the base of the Eiffel Tower. At 10:00, the organizer decided to cancel the promotion due to the excessive turnout.

The total amount to be used for the stunt will now go to the humanitarian organization Secours Populaire, the chief executive of Rentabiliweb promised.