I’ve written previously about the upcoming referendum in Switzerland which will decide whether there will be a constitutional ban on the building of minarets. The Swiss People’s Party has now injected a little fun into the debate with an online whack-a-minaret game.

I saw this game yesterday, but there was no information about it in English. Now, thanks to our Flemish correspondent VH, we can tell you about it. Here’s his translation from Politically Incorrect:

The game starts by showing a peaceful landscape. Then countless minarets spring up like spears over the land. The player has to aim at the “prayer towers” and a hit makes the minaret disappear. If you miss it, the muezzin will climb on the minaret to call to prayer. [You can also try to silence the muezzin.] 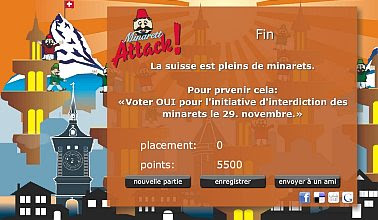 “Today we launch the game,” the SVP National Walter Wobmann said. “It is available online and will have its own Internet address.”

The online game was developed by the advertising and public relations firm Goal in Dübendorf, the house agency of the SVP, which also designed the controversial anti-minaret posters.

The game can be played here . When the screen “Get Ready” appears, press the button underneath to start: “Spiel starten”. Once the game is finished, your score will appear and the text: “Switzerland is full of minarets. To prevent that from happening: vote “yes” in November 29 in the Minaret-referendum.”

Actually, the button on my version was in French, and said “Commencer le jeu” or something similar. Presumably there is a third version in Italian, which is also an official language in Switzerland.

Have at it, everybody!