Update: a photo of the Piccadilly demo has come in: 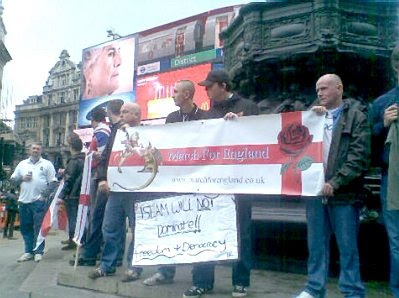 Anjem Choudary has canceled his March for Sharia in the UK, but the counter-demonstration organized in London by opponents of sharia is continuing as planned.

There are about 200 anti-sharia activists in Piccadilly Circus and lots of press and photographers. It is a multi-racial gathering, and there are many Union Jacks on display.

Obviously, there are no Muslim demonstrators to counter, but people are showing their opposition to sharia law in Britain. The protest is very peaceful and good-spirited.

We will have some photos later on.

Steve Gash of SIOE is present, as is another English Democrat member of UKIP, Magnus Nielsen (updated).

Some placards that are being carried by the crowd:

Some of the organisations and groups represented:

As of right now, there are about 200-300 demonstrators present.

Choudary has organised another event but the protesters at Piccadilly are waiting to find out the venue, and then will then go to that location.