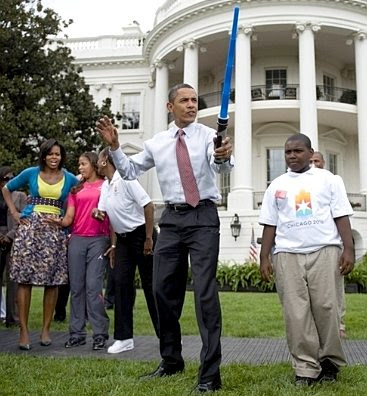 When we abandoned Eastern Europe this week, I thought we were in trouble. When we cut defense spending earlier, I was sure all was lost.

But I should have known Obie Wan was on duty. All is safe as long as the One is guarding us from his redoubt at the White House. Hope he keeps his batteries dry.

Whatcha wanna bet ol’ Putin is quaking in his boots about this administration?

I asked the Baron his opinion on the apparent incoherenence of White House foreign policy. He said it doesn’t rise to the level of incoherence. What they have is a series of poses, none of which signifies anything.

Here’s what went through my head when I looked at this photo:
– – – – – – – – –
Man, I wish he’d just whip around and run that blade through the belted person on the far left. Make it quick and merciful.

A fashionista I’m not, so would someone explain to me the subtle chic involved when our First Lady (who has paid advisors to tell her suggest what to wear) inevitably cinches some sort of belt over her outfits before she steps out the door?

Is this what is called looking “pulled together”? If what I’m seeing is a fashion statement it’s in a language I don’t read. Can any of our readers translate? I particularly expect to hear from you sophisticated Europeans.

No, I’m not normally so catty. But this woman’s clothing is so…so…I don’t know what. Anyone who would spend five hundred dollars on a pair of sneakers is not a serious person.

30 thoughts on “Take That, Vladimir Putin!”