I’ve written a couple of times recently about three “Swedes” who turned up in Pakistan last month when they were arrested along with nine other Al Qaeda members who were planning terrorist attacks on Western embassies in Islamabad.

A Swedish reader has kindly translated an entry from Thoralf Alfsson’s blog which demonstrates that one of the “Swedish” terrorists in Pakistani custody is in fact the daughter of the President of the Swedish Muslim Council: 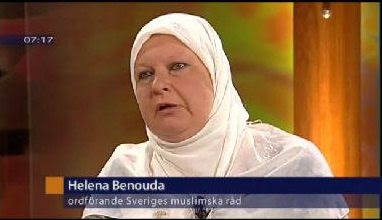 Today came information about the other persons who were arrested along with Mehdi Ghezali in Pakistan. They include a 19-year-old woman who two years ago was arrested in Somalia and jailed by the Ethiopian military for a few weeks. Read my post from August 2007.

With high probability (indirectly confirmed by Aftonbladet), this is Benouda Safia, the daughter of Swedish Muslim Council President Helena Benouda. Possibly the child who was mentioned is a granddaughter of Helena Benouda.

If this is true, one may really wonder what the Swedish Muslim Council President’s daughter is doing together with former Guantanamo Prisoner Mehdi Ghezali in Pakistan. That they should have “clean flour” in their bags is highly unlikely.

Will Helena Benouda now start a new site just as she did in 2007?

Why do the media not tell the identity of the arrested 19-year-old woman when they obviously know it? Why protect the President of the Muslim Council of Sweden? The most Honorable?

Look at the image below from Aftonbladet and compare it with the picture at the bottom of the post. Can you call this an actual picture proof? 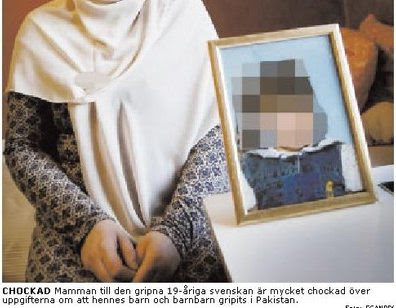 (SHOCKED! The mother of the arrested Swedish woman is very shocked about information that her daughter and her grandchild should have been arrested in Pakistan.)

Look at the image from Aftonbladet and compare it with the picture below: 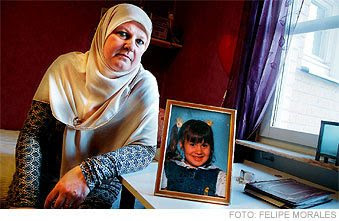 It is time for Helena Benouda to resign as chairman of the Muslim Council of Sweden as she obviously has channels to Al-Qaeda and terrorism.