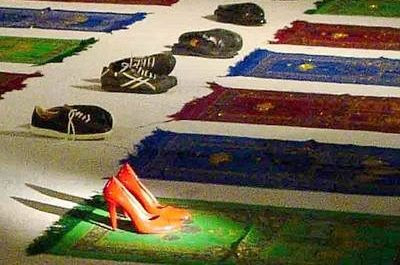 Oh, no! It’s happening again: the Islamic world is grievously insulted by a work of art produced by an infidel! More specifically, a French artist has showed disrespect for Muslim prayer mats.

This reminds me of an old joke:

The new guy asks his cellmate what’s going on. “Well,” says the older prisoner, “we’ve all been in this here prison for so long, we all know the same jokes. So we just yell out the number instead of saying the whole joke.”

So the new guy walks up to the bars and yells, “Number six!” There was dead silence in the cell block. He asks the older prisoner, “What’s wrong? Why didn’t I get any laughs?”

“Well,” said the older man, “sometimes it’s not the joke, but how you tell it.”

I suppose I could save our readers a lot of time and say, “Number forty-one!” But just for the heck of it, here’s the whole story, as reported by our Flemish correspondent VH.

Artist’s gallery closes down after angry reactions from Muslims

Brussels — A young French artist has prematurely closed his gallery in the Charles Rogier Passage, near the train station Brussels North. He had exhibited a work of art that was considered a provocation by some Muslims.

The cause of the fuss was a pair of bright red high heels under a spotlight, surrounded by men’s shoes, all on Muslim prayer mats.

The artwork is exhibited in a gallery whose windows have been sealed since Wednesday to avoid hostile reactions from passers-by. The artist has been threatened before, and the gallery damaged. “They attempted to shatter the window with stones before; that caused a crack in it,” the artist Mehdi Lahlou-Georges says. “And it is a very thick piece of glass; they must have thrown the stone with a lot of force.” 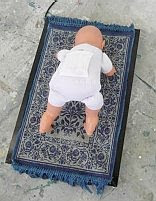 The angry reactions came from certain Muslims who view the high heeled shoes as a provocation to their faith.

TV-Brussels approached a random passerby and asked for his response. He did not had no hostile reaction, but the woman’s shoes should not be there, the man said: “Those red high heels bring misfortune. Men and women are always separated during prayers.”

With the woman’s shoes, the artist wanted to point at himself, as a transvestite. The artwork was to remain in the gallery until October 5. 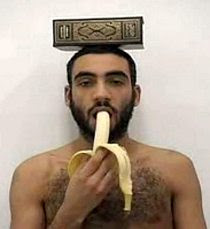 It seems that the stone-throwers have not been arrested and punished, instead they are rewarded because the artwork now has to go. Fortunately we still have some photos. And a few videos.

Eating a banana while balancing a Qur’an on his head: (Mehdi-Georges Lahlou — Stupidité contrôlée II [Stupidity under control]).

There are more videos here.

In 2002, Five men (of whom four were Moroccans) were arrested in Bologna in northern Italy after their behavior inside the San Petronio Basilica aroused police officers’ suspicions that they were plotting a terrorist attack. The Basilica has a 15th-century fresco with a depiction of the prophet Muhammad among demons in hell that has drawn complaints from Muslims before.

In 2005, the Danish newspaper Jyllands-Posten published 12 drawings depicting Muhammad, of which the most famous was the Turban Bomb by Kurt Westergaard. Afterwards the Muslim world was higly offended and never really recovered from it. In 2009, Turkish Premier Recep Tayyip Erdogan objected to the appointment of the Danish Prime Minister Anders Fogh Rasmussen as secretary general of NATO, because in 2006 he refused to apologize for the publication of the cartoons. Only after major concessions to Turkey — a member of the Islamic country club OIC (which has a Turkish secretary general, Ekmeleddin Ihsanoglu) — did he drop his blockade. Rasmussen recently took part in an Iftar meal in Turkey to show respect for “Islam as one of the world’s great religions”.

In 2007, Turkish hackers attacked more than 5,000 Swedish Web sites in response to a Swedish newspaper’s publication of a disparaging caricature of Islam’s prophet.

The same year, a museum in The Hague suddenly rejected exhibited art works by Sooreh Hera depicting two men with masks of Mohammed and his son-in-law Ali (photos here and here. The work would be “offensive to certain groups” according to the museum director Wim van Krimpen, who at first had said he loved the work.

When in 2008 a Museum in Gouda announced it would exhibit the photos, about 75 “liberal Muslims” protested against it. Museum manager Ranti Tjan: “Insult is a consequence of our freedom of religion. It’s difficult to limit it.”. The Museum in Gouda resisted the pressure and finally exhibited the photos late 2008, as did the “Verzetsmuseum [Museum on the WWII resistance] Zuid Holland”.

In 2008, Belgian police had to protect a 17th-century pulpit in a Flemish town. The sculpture, which dates from 1685, two years after the battle of Vienna, depicts “a man” subdued by angels, representing the triumph of Christianity over Islam. The Brussels Journal was threatened by Turks for showing photos of the sculpture, after the newspaper Yeniçag called in an article to “Stop this hideous insult”.

Also in 2008, Muslim vandals attacked a London art gallery, after it showed inflammatory images of veiled Muslims. The solo exhibition of paintings by Sarah Maple included a veiled woman holding a pig, which was interpreted as a flagrant disregard of the Islamic ban on eating pork [another painting was of a Muslim with banana, called Bananarama]. The exhibition also included two self-portraits: one of Sarah Maple wearing a headscarf and an image of Kate Moss’s naked breast attached to it. In another art work, a veiled Muslim woman wears a badge that says “I love orgasms”. The windows and doors at the SaLon Gallery in West-London were smashed after a series of abusive, anonymous phone calls and angry protests by Muslims.

As a contrast: In 2008, creative Muslims in Sarajevo wanted to express themselves by painting the pavements in the city in “the color of Islam”: green. “This is a message of intolerance and a perfidious scene of ethnic cleansing that was preconceived as a way to drive away people of other ethnicities and religions living in Sarajevo,” said NGO President Leo Plockinic. “It is clear that Sarajevo wants to be a greater Tehran than the capital city of the Islamic Republic of Iran itself.” According to the Mayor Semiha Borovac though, painting the pavements and streets green would be good for the city, because the city lacked greenery. He did not view it as offensive to citizens of other religions.

Finally, returning to Bologna: In 2009, the Italian police decided to search visitors to the magnificent Church of St. Petronio from then on, after offended Muslims protested against a depiction of Mohammed in a 14th-century fresco [that depicts Mohammed being tortured in Hell], and there had been unsuccessful attempts to blow up the painting.

14 thoughts on “Muslims Provoked by Art”