A similar incident occurred yesterday in the Hague: what appears to be an effigy of Geert Wilders was found hanging from a tree in a public space. Our Flemish correspondent VH has translated a report on the incident from EdeStad.nl. 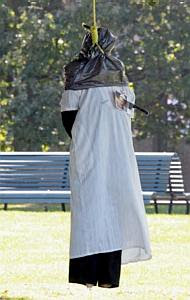 Police in The Hague this Tuesday found a doll in the vicinity of the Central Station of the Hague [at the Koeklamplaan] on which a picture of PVV leader Geert Wilders had been stuck with a knife. The doll was hung from a tree with a rope around the neck. The police arrested four persons who confessed their involvement.

That is what the police of the Hague have made public. Around the photo of Wilders, fake blood was smeared. The doll also had a bag over its head. The police, in consultation with the public prosecutor has confiscated the doll. Geert Wilders, according to the police, has indicated that he will file a report of the threat with the police.

The four arrested suspects, three women and a man, 18 and 19 years old, are from the Hague, Leiden and Nootdorp, and said the doll was an art project as part of an assignment for school. Two of the women have been released; they seemed to have nothing to do with the matter. The other woman’s involvement is being investigated at the moment. The man remains a suspect, a police spokeswoman said.

Photos: of the doll and a close-up.