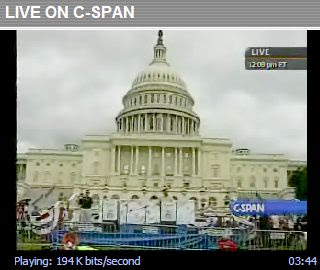 I recommend tuning in to C-SPAN and watching the live coverage of the “un-American right-wing extremists” who have converged in front of the Capitol today to protest the bloated overreach of the federal government.

One crowd estimate placed the attendance at 1.5 million, but I find that hard to credit. All the news reports, however, agree that there are tens of thousands of people gathered on the Mall.

Notice that Joe Wilson has plenty of fans in D.C. today, even if his fellow Republicans in Congress are having the fruity vapors over his call-out to Obama during the president’s speech the other night.

Our march to Full Socialism may be unstoppable, but we’ll get a few good days along the way, and this is one of them. I wish I could have been there.

5 thoughts on “Bringing it All Back Home”