Last night we covered the “youth” crisis in Gothenburg, and later on there will be material on the situation in Uppsala. In the meantime, to keep up with the latest cultural enrichment from Sweden, we return to Malmö.

The story below is an excerpt from Aftonbladet, adapted from a translation by Steen.

Firemen in Rosengård are forced to acquire helmets 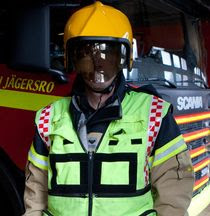 Rosengård firemen are forced to wear helmets with visors and borrow military bullet-proof vests. “We have reinforced our cars, but they have suffered substantial damage anyway.”

“Every day we have an alarm from Rosengård, and we never know what will happen. We want the police in place beforehand. If there’s no risk of the fire spreading, we often don’t go there at all.”

“Many fires are set just to get us there. Firemen from Jägersro fire station are now equipped with special helmets that protect the face and neck. Last winter, when it was the worst, we were forced to borrow bullet-proof vests from the military.”

One senior colleague has quit the force, as he did not feel he could guarantee his men’s safety. Several others have asked to be transferred to service elsewhere.

11 thoughts on “Body Armor for Firemen in Rosengård”