Fjordman sent a story from English section of The Local. It concerns Paul Anka’s second wife, Anna, who happens to be Swedish.

First, about Paul Anka, since he figures in the story:

Yes, Mr. Anka is still alive and seems to be thriving, if you don’t count the head wound. Mr. Anka is a good performer if you like his kind of music, and many people do. He’s extraordinarily wealthy as a result of his tunes, but he also has an unfortunate tendency to profane bullying, for which he has become rather infamous as a result of the eternal nature of the internet.

Like many entertainers, he divorced his wife of thirty-seven years (and mother of his five daughters) to eventually end up marrying a trophy wife several years later.

Well, a kind of trophy wife. And he kind of married her in the modern times version. That is, they cohabited beginning in 2002 and after the births of two children, they married in 2008. Not the way he did it the first time in 1963, when he married the daughter of a Lebanese diplomat who was, shall we say, a cut or two above Mr. Anka’s middle class Lebanese Canadian background. But, hey, after thirty-seven years, things get stale, hmm?

So now he has wife #2, set of children #2, and they live happily ever after, as Mrs. Second Paul Anka tells The Local :

The Swedish-born wife of Las Vegas crooner Paul Anka has called Swedish men “tragic” for their “nappy changing” and “equality nonsense”. LA housewife Anna Anka argues that she could be a role model for Swedish women to follow.

“In Sweden it is acceptable to let yourself go, as long as you get your man. I feel sorry for Swedish men who marry beautiful women who then quickly become unattractive, dress sloppily and neglect their husband’s needs,” Anna Anka writes on opinion website Newsmill.

Aside from claiming a “large fee” for taking part in the programme, Anka claims to have generated “a great deal of attention” in Sweden since the show was broadcast.

“It pleases me. Maybe I can be a role model for other Swedish women to follow,” she writes.

She continues to direct criticism at Sweden in general, and Swedish men in particular, hailing her adopted home of the USA as a place were “men are men, and women are women”.

“Swedish dads are tragic with all their nappy-changing and equality. A real American man panics if he is alone with a child for more than 20 minutes. American dads do not prepare dinner and do not iron, they work and provide for their families.”

This lecture is so loaded with fantasy it’s hard to know where to start. Let’s just go with the Rilly Big Lie, i.e., that she is a role model, or ever could be, for Swedish women. Heavens to Betsy, I sure hope they don’t follow her example. Swedish men have it hard enough without risking felonious assault at the hands of their wives: 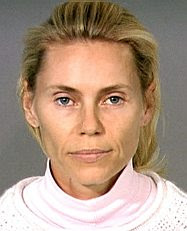 Anna Anka, wife of entertainer Paul Anka, has been arrested on charges of domestic battery after hitting her husband in the head with a piece of ice.

After returning from the hospital where he received two staples for the head wound, Anka found Anna missing and contacted authorities.

When Anna returned home, police arrested her for domestic battery, however, the Ventura County D.A.s office declined to prosecute the case.

So much for happily ever after. They married officially in the summer of 2008. In the weeks leading up to Christmas of 2008, Mr. Anka was getting treated for his marital combat wounds. There is no evidence that he either initiated or responded to Mrs. Anka’s tantrum. One commenter on a post about this incident claimed to have known Mrs. Second Paul Anka in school and she had a bad temper even then.

The charge drawn by the county attorney against the Swedish shrew was felony abuse. Because Mr. Anka is sixty-eight, thirty years older than this hothead, a few wags suggested that she be charged with elder abuse instead. My, my.

Like many abused spouses I’ve counseled, Mr. Anka made the county drop the charges. No surprises there.

But her lecture isn’t done, in fact it grows even more fantastical:

In return for economic security provided by their husbands, wives in the US always act with consummate style, Anka claims.

“As a housewife you should support in every way, you should always be attractive and well-dressed.”

This is like something from Marabel Morgan and her “Totalled Woman”( which did so much harm to women’s attempts to provide robust alternatives to the academic hyperfeminists back in the ‘70s). In reality, many US wives work; they are not sitting at home basking in the economic security provided by their husbands. As our vice-President made very clear, any jobs created in this down turn are not going to white men. Official government policy, guys.

But give Anna credit. She’s not about to let reality get in the way of her lecture:

The Skåne-born former beauty pageant queen then goes on to defend her treatment of “the long list” of those on her payroll and praises the US service-minded society.

“If you employ someone in Sweden they would have training and qualifications. Here [in the US] it is illegal Mexicans that do the work…They can’t speak English. It is like talking to a wall. It can get frustrating at times.”

Anka claims that if Swedes would follow after the US and employ help then families would be under less pressure.

“What I am getting at is that in the USA it is all about service. If the Swedish people had learned from the USA then Swedes would have more time for each other. There is no quality time. Now they come home and sulk and have to clean and iron.”

Oh, by all means, you Swedish families: go find some illegal Mexicans to abuse and you too can have more time for the family. Or you could follow the Saudi example and import some Indonesian slaves workers and take away their passports.

Read the whole article, including her sex advice to wives and the hilarious comments that follow. This woman has a bad case of Dumb California Blonde. She must have picked up the disease after she left Sweden, but it now appears to be a permanent condition.

Poor little rich boy Paul Anka. Imagine, he has this woman to look forward to in his declining years,beating him up while he crouches in his wheelchair — no, I’m not kidding. He ought to consider Divorce #2 and get a dog instead. As long as he didn’t buy a Rottweiler, he’d probably be safer than he is now.

When Fjordman sent me this story, he also included a comment I’d left in an earlier post. I’d forgotten I wrote this, but it sounds as though it was a warm-up for Anna Yeager Anka’s dubious advice to Swedish women:
– – – – – – – – –

It remains a mystery to me that Sweden is so destructive of its men. They are called “stupid” in polls among women. They are regularly denigrated as less evolved than women.

It’s disgusting and it’s destructive of a country’s social fabric to attempt to reduce men to some inferior version of women. Having them stay home “equally” is not only utopian fluff, it’s actually damaging to infants. Men are not hormonally driven after the birth of their child to minutely observe an infant’s behavior. And with all the good intentions and careful thought in the world, they still can’t do as good a job as a woman. Not with newborns.

What they *can* do is take good care of the momma. A new mother who feels contained and made safe by her partner is a better mother. There is less post-partum depression, and the baby thrives in this environment.

This blunted idea that men = women does incalculable damage to babies. However, no man in Sweden could say that and survive.

It’s happening in the US, too. The phenomenon of “mean girls”, of sexually aggressive females at age 13, of the numbers of women now exceeding men at colleges is a commonplace. And the Kool-Aid drinkers think this is good.

Whenever women move overwhelmingly into a field, the men move out. It’s nothing planned or thought about: too many women in their group is just more estrogen than any man is comfortable with, so he moves on to something less confining, some place where he can breathe.

The other thing which Swedish and American elitist women don’t realize is that children who grow up without men around are less socially skilled, less intellectually challenged, and have poorer intuitive responses to those around them. They are also more aggressive.

American professional women don’t get it, either. They believe the propaganda-spewers. Someone pulled off their input knob so they can’t learn anything new. They sure can tell you about all the absolutes, though.

What we’re doing to men is destructive and immoral. It does not bode well for the future.

The phenomenon of “mean girls”, of thirteen-year-old girls who are sexual predators, of feminized men or their opposites, the gang-banger homeboys — all of these are disturbed, skewed behaviors. They are indicators that something is wrong with our culture. The frustrating thing is, how does an individual “fix” his culture?

Perhaps you have to care enough to put your foot down. We’re seeing that politically with the growth of the anti-Tax Movement, the Tea Party People. No one sat down and planned this. It’s a distributed process, and it occurs locally, but with networking to other places. The September 12th March on Washington was proof that change is in the air.

But those are political stirrings. How do we bring about cultural change? What will it take to make parents, for instance, band together in the face of school administration bullying? What is the tipping point there?

What will be the tipping point for men, fed up with being the butt of jokes, of being used by women?

What will be the tipping point for women, expected to rise to some “10” level of perfection before they’re acceptable in the meat market which has come to dominate the social life of single young adults?

I don’t know the answers, but I’m watching the Tea Parties change the political climate, so I have hope that the social climate can be shaken up, too.

At least I have proof that change is possible. And given the fall of the mighty recently, I know from personal experience that evil is reversible.

Let’s see what our global ruined economies do to dating, mating, and family-establishment patterns. Better wear your safety belt and a helmet.

20 thoughts on “And Now a Lecture from The Terminally Clueless”