Roger Kimball has the skinny at PJM regarding Yale’s squeamish removal of any and all illustrations of the MoToons in a book about the ‘Toons. How dumb is that?

Whadda bunch of scaredy cats. Have you ever seen Yale’s seal? We’re talking Lux? Veritas? How about Darkness and Half-Truths? Yeah, Yale as the demimonde.

The book in question is by Jytte Klausen, and the title is The Cartoons That Shook the World without the shaking ’toons, mind you. And no images of Mohammed, either. Maybe Jesus with a beanie? Saint Peter juggling rocks?

Yale University and Yale University Press consulted two dozen authorities, including diplomats and experts on Islam and counterterrorism, and the recommendation was unanimous: The book, “The Cartoons That Shook the World,” should not include the 12 Danish drawings that originally appeared in September 2005. What’s more, they suggested that the Yale press also refrain from publishing any other illustrations of the prophet that were to be included, . . .

Yep. Two dozen useless mandarins pondered the conundrum and came up with this cockamamie conclusion. Heck, why bother writing the book? Certainly we cretins who would be its most likely buyers don’t read book without pictures. Duh. Boring.

Mr. Kimball has a dissident quote from The Guardian. At least there is one sane soul left.

Read all of his essay. Mr. Kimball gives a good account of the dirty details on who is possibly the villain and who is the fall guy in this academo-drama. What entity do you suppose is behind this demonstration of the return of the Dark Ages? What entity has yet to leave the Dark Ages?

And how long do you think that Hebrew inscription will be permitted to stay on the Yale shield? Anybody want to start a pool? 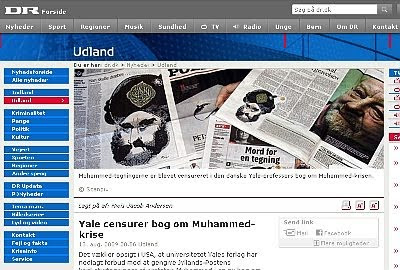 There is a sensation in the USA: Yale University’s publisher has been told not to reproduce Jyllands-Posten’s cartoons of the prophet Mohammed in a new book about the crisis.

Danish-born Professor Jytte Klausen of Brandeis University is the author of the book The Cartoons that Shook the World, published by Yale University Press.

The drawings gave the publisher cold feet, so it consulted a wide variety of diplomats and experts on Islam and terror, and their message was clear: do not use the drawings.

But the publisher went even further – a number of historic drawings of Mohammed were removed at the same time. There was a picture from Ottoman times, a drawing from a children’s book, and a painting by Gustave Doré showing Mohammed being tormented in hell, as described in Dante’s “Inferno”.

Jytte Klausen agreed to pull Jyllands-Posten’s drawings, but she is baffled by the fact that the other images were also left out, writes The New York Times.

Yale University Press defends itself by saying that the images can be found on the Internet for those who are interested.

Author and religion researcher Reza Aslan calls the book a very complete account of the crisis, “but not to include the drawings seems to me downright idiotic.” He says that an academic work such as Jytte Klausen’s will not spur further unrest, even if it includes the drawings.

The crisis of 2006 resulted in embassy burnings and up to 200 deaths in the Muslim world. The American media at that time failed to publish the Jyllands-Posten drawings.

[Note: translated by the Baron. A round of applause, please…]

What is it about the American press that it attracts full-blown wusses and bullies? These maroons have all the integrity of rotting vegetation. And all the brains to go with it. They smell to high heaven.

Jyllands-Posten never knew what worldwide maggoty cowardice their experiment in free speech would uncover. They have done this planet a service, and at some cost to their own safety.

It is they who should have gotten our Medal of Freedom, not that anti-Semite, Mary Robinson, may God forgive her.

Here is a Danish commenter from the Human Events website linked above, explaining the whole mess, which was engineered by some professional proselytizers of the Religion of Peace, a faith chock full of pacifists who just happen to have a penchant for setting things on fire and blowing stuff up:

Hm, weird that the effect of offending so peaceful a religion is that our flag and embassies are torched…they reason why the newspaper in question printed the cartoons was that they wanted to challenge the viewpoint that cartoonists were afraid of offending muslims.

The irony here is that the reactions clearly demonstrate that muslim people are very readily offended.

Another incredibly ironic twist is that it wasn’t until Danish imams toured the arab world with the drawings approx. two months after the publication that the strong reactions started – most of the imams in question had ties to Hizb-ut Tahrir, which is banned in most northern european countries because they’re considered extreme, but which is allowed in Denmark because of our general tolerance.

Then there are a couple of things to note about the flyers which the imams handed out on their tour. I’ve read a translation, and the following makes me question the purity of their motives:

There have been demands that the Danish government take action towards Jyllands-Posten, but that can’t happen. Jyllands-Posten is privately owned and protected under the freedom of speech.

Religious people from other countries don’t control what our newspapers print, and they never will.

There are 2,073 comments on that post. Yes, lots of foaming-at-the-mouth peace-lovers showed up to express their views in this country of free speech. [Nudge, nudge, Ali & Muhummud].

Here’s one response by the pacifist side:

I believe that we all should respect other people’s traditions and believes. It was extremely wrong of the dutch to print such abusive cartoons related to a Holy personality.
I don’t remember any abusive article or cartoon printed by the Muslim media which might hurt the religious believes of Jews or Christens

Nope, I didn’t make that up. Check the link. This guy in Pakistan, Land of Peace and Forgiveness, believes this manure. More power to him. May his IQ increase.

5 thoughts on “The Yale Press Plot Thickens to Glop”