Coming on the heels of the Danish Hells Angels articles, Lene Espersen’s remarks, and last weekend’s events in Birmingham, the following report adds to the ominous atmosphere of our times. One can sense that the storm clouds are gathering in Europe, and there’s an occasional flash of lightning and a low grumble of thunder. But no deluge, though, not just yet.

Some kind of trouble is on the way, but it is not yet evident when it will come and what form it will take.

Our Flemish correspondent VH has compiled a report on the looming civil unrest in Germany. He draws on the writings of Udo Ulfkotte, and includes a couple of graphics:

Because the “War-map” of Ulfkotte is only on the web as a small jpg, I made a larger version of it, the “Atlas of Rage”: 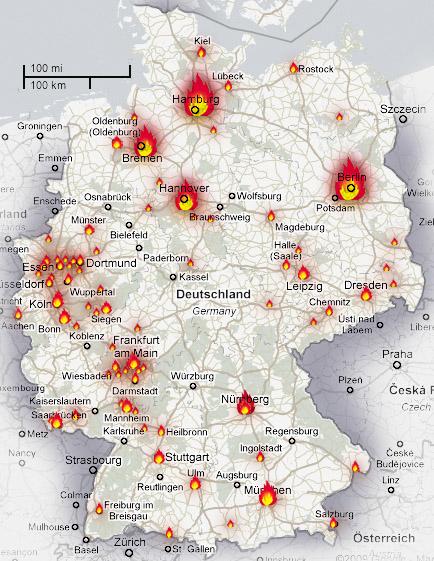 Also a graph from the report Being Muslim in Germany, that shows how many Muslims there are in Germany (most recent estimate) and of what background:

VH follows with a translation of a review of Udo Ulfkotte’s book Caution: Civil War! from BuchTest:

Paris. Copenhagen. Athens. The people of these European cities already know what civil war-like situations look like, mostly triggered by Muslim immigrants. The police and authorities are helpless against the marauding masses and often also are held on a short leash by Gutmensch-politicians. The economic crisis is gravely adding to the already simmering clash, and social tensions. Dr. Udo Ulfkotte, a controversial writer and one of the most prominent terrorism experts and opponents of Islam in Germany, strongly warns in his new book Caution: Civil War! (Vorsicht Bürgerkrieg!) about the risk of an escalation. [Although there is an enormous media and advertising blockade, the book in the meanwhile has become a bestseller in Germany.]

In his arguments he brings out the big guns, and fulminates in clear polemics against Islam and German Politics: “The political, economic and ethnic crash that in the 21st century is spreading like a shroud over the world might overshadow the 20th Century version.”

The financial crisis as a starter and amplifier

In first part of Caution: Civil war!, the current financial crisis and the resulting expected social tensions are a prelude. As with his previous books, Udo Ulfkotte often bases his argumentation on documents and insights which usually only come before the eyes of a handful people: the secret plans of the Federal Government, the Armed Forces and secret services. Many of his sources, however, are also accessible to the public, as the author argues, and he therefore offers (additional) links to all 857 footnotes of the book on a dedicated website.

Udo Ulfkotte naturally begins his book with threat scenarios, and shows why the government and secret services have long been preparing to respond to uprisings — if necessary even with military means. The book has an enclosed foldable map that shows 150 residential districts where riots are feared in the near future. In the Federal Ministry of the Interior that map is unofficially called the Atlas of Rage [bmp file]. And yet while in public view the effective deployment of the armed forces in Germany is being discussed, this reason alone already offers ample ammunition for (domestic) city-battles.

What the financial crisis will ultimately lead to is the strengthening of the already existing internal conflicts between the left wing and right wing, and between immigrants and natives. And with these issues the author is dealing with the subject he is dedicated to, and about which he is totally informed. With the help of countless newspaper articles and series of events, he demonstrates that the integration of Muslims in Europe has failed.

Udo Ulfkotte speaks openly of what weighs heavy on the heart of many Europeans — or better still — on their stomachs: many Muslim immigrants are, due to their low educational level and high unemployment rate, a burden on our welfare state and have such an above-average crime rate that of the much-praised cultural enrichment nothing remains but social debts.

But anyone speaks out as clearly as this will immediately be pushed in a right-wing corner by the media and politicians, so that they do not need to address the reality that emerges from statistics and studies. Even when this comes from their own studies, such as the report Muslims in Germany, issued at the end of 2007 by the Federal Ministry of the Interior, which mainly shows the resistance to integration. Or perhaps the report latest study [pdf, 10Mb] of the same ministry [Department for Migration and Refugees], “Muslimisches leben in Deutschland” [Muslim life in Germany], conducted at the behest of the Islam Konferenz [an organization for the dialogue between the German State and Muslims], in which it was suddenly discovered that there are over one million more Muslims living in Germany than previously thought. [The older estimate was between 2.1 and 2.3 million plus 1.7 to 2 million (p.78), but seems to be between 3.8 and 4.3 million — which makes the percentage Muslims in Germany between 4.6% and 5.2% (pp.80, 81, 84)].

Not just an Anti-Utopia — but also a Status Quo

Unlike the current political-intellectual critique from inside the system, such as Axel Brüggemann (“We take our politics back”) or Gabor Steingart (“The question of power”), Udo Ulfkotte does not mince words. He writes about the anger of the population and of the barbarization of society, and documents the current mood with many quotes and comments from websites. Caution: Civil war! is not the only polemic; widely respected authors like Henryk M. Broder [Critique of pure tolerance ( Kritik der reinen Toleranz ) and Hooray, we surrender!, the lust of giving in (“Hurra, wir kapitulieren!”)] are provocative writers who were subsequently attacked. The book by Ulfkotte is above all a shocking wake-up call. This will likely not make it the easy for the author, but with its clear pointer “to the top”, he will find many followers.

The book shows daily injustice in various dimensions: In German judicature there is an ever more frequent “immigrant-bonus” for offenders, either in the case of honor crimes or violence against infidels. Dominated by the old sixty-eighters’ leftist politics, police and prosecuting authorities repeatedly enforce silence about the real perpetrators of numerous crimes: those who suffer most from that are the policemen themselves. For example, during the May 1 demonstrations in Berlin they were no longer only attacked by leftists, but also by many migrants. “The rule of law is finished,” as the author concludes.

Now Udo Ulfkotte is probably one of the most controversial writers, and as a person has also repeatedly affronted in the Islam-critical scene. In 2007, as part of his co-initiated “citizens’ movement Pax Europe [which had as its motto “The Secret of freedom is courage”], he co-organized the anti-Islam demonstration in Brussels (and Cologne), but afterwards dissociated himself from his own organization.

The hardest front the author faces though is of the left-wing media landscape, and of course the Muslims themselves. In June 2008 he received thousands of death threats from the Islamic side, after a fake YouTube video appeared in which two people pretending to be Ulfkotte and his wife insulted and denounced Islam.

Also as a publisher, Udo Ulfkotte is controversial [according to the writer of this article — VH], because he withdrew his book The War In Our Cities — How Radical Islamists Undermine Germany” (Der Krieg in unseren Staedten — Wie radikale Islamisten Deutschland unterwandern) in 2003 at the demand of the Islamic Federation and numerous other Islamic organizations.

[Note: Ulfkotte himself writes about this: “Most of the forecasts I made in the book (The War In Our Cities) have been confirmed by reality, but Islamists have succeeded in forcing the publisher to quietly take it off the market in the summer of 2006, after the book had passed all legal hurdles and was selling strongly. Islamists from Birmingham and Vienna threatened a flood of law suits. (…)” — VH]

One year later, his home and office were searched, because he was suspected of breach of secrecy and bribery of police officers.

[Note: Udo Ulfkotte on his website writes about this search: “In March 2004, my home and the offices of my wife, in a different building, were searched. The allegation? Bribery of civil servants and accessory to treason. I felt like I was in a movie. Never had I offered money for information to any civil servant. The authorities had actively leaked information to me for over a decade, and their representatives had always encouraged me to publish. (…) My documentation came from the documents of intelligence services. Wire-tapped phone conversations, secret photos of Islamist meetings, manhunts, exchange of findings between European intelligence services.”

In his personal life he also endured the consequences: “Old friends started avoiding me, neighbors started to refuse to accept packages for a “criminal”, and my wife lost her means of income. A picture of her offices from the outside appeared in a yellow-journalism newspaper and made sure that the clients of her accounting service were warned not to do business with a ‘criminal’.”

In court, however, his information and sources had to remain confidential: “I had not taken into account that in a court no intelligence service will disclose its sources and processes of gaining information to become part of the public record. I alone was therefore going on trial.” Apart from that, when he did produce other documents, “the Islamists from the camouflaged fronts of the Muslim Brotherhood simply denied their content. Even when public, official reports — for example, from the Federal Office for the Protection of the Constitution in Germany — confirmed my statements, those suing me denied their content and filed another lawsuit against the relevant government office. The whole exercise was getting expensive, and soon my legal costs exceeded €50,000.” This lawfare gave him the impression “that some of the claimants were cynically exploiting the opportunities offered by the German constitution while seeking at the same time to destroy that very same constitution and the state.” An interesting example he mentions is that “plaintiffs (one of them today the best known spokespeople for Muslim organizations in Germany) claimed, for instance, that they never celebrated the attacks on 9/11, although they were filmed doing so by intelligence services. They knew that members of these services would never show their faces in court.”

Furthermore, if there would have been any untrue information in his books, that had been combed line by line by government clerks, it certainly would have been used widely and openly against him. Ulfkotte: “For the record, once again: nobody accuses me of spreading untrue information in public statements or in books on the terror networks in Germany and the danger they represent to the public. On the contrary, this information is based on the truth, but is obviously perceived as being such a threat to the public that it cannot be allowed to spread. However, if you concentrate too much on the bearer of bad news, the real danger sometimes gets forgotten.”]

Other allegations attempted to undermine the credibility of the publicist. In the book Holy War in Europe two errors were discovered. However, this does not mean that the hundreds of other sources and statements are incorrect. The same might be the case with Caution: Civil War! — in the vast quantity of facts there could be one or a few errors. The basic mood of the book, however, portrays an alarming reality, whether some facts may appear exaggerated or polemical or not.

Whoever wants to impute the author with scaremongering or even racist incitement is confusing cause and effect. Integration problems in Germany and Europe mainly come from Muslims themselves, and are caused by the politics of silence. And if you can not speak out anymore, we have already given up our freedoms.

VH adds this list of at-risk neighborhoods that is said to have been compiled by the German government in response to the riots in Paris in 2005: