A couple of years ago I decided that Denmark is the only sane country left in the world*. The advent of the Messiah in the USA has only strengthened this conclusion, since it will be at least another three and a half years before my country can even hope to return to sanity.

My opinion is confirmed every morning when I wake up and read the emails and skypes from my Danish contacts. Not only have the Danes retained their sanity in the face of the multicultural onslaught, but they are actually allowed to express their non-PC ideas publicly, even in the mainstream media.

The translations from Denmark are so refreshing that they brighten up what would otherwise be an unremitting picture of gloom and disaster. Here’s the latest voice of sanity, coming from the vice prime minister of Denmark, as reported in Ekstra Bladet and translated by our Danish correspondent TB: 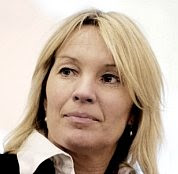 If you walk around thinking that the biggest threat of today against your existence is the environment, which threatens to flood your life in the coming decades, then think again.

The biggest threat against Denmark and Danish values is Islamic. That is what Lene Espersen, Leader of the conservatives and vice prime minister, states in a tone which one normally only hears from the Danish People’s Party.

“The biggest threat against us comes from Muslim militant extremism,” the minister states to Politiken.

Lene Espersen is happy that many immigrants participate in the labor market — but that does not solve the problem, she states.

She sees a strengthening of the politics of cultural values as the way out of what she calls a growing problem.

“We want to be tougher in our demands. We have to appeal to those who have problems seeing the wisdom in our model of society. There should not just be a stick, but also a carrot,” she says to Politiken.

What do you think: Does Denmark have a problem? And is the Lene Espersen’s proposal the right solution?

* Before you jump all over me: yes, I agree that Slovenia, Italy, the Czech Republic, and Switzerland are at least partial exceptions to the rule. But, generally speaking, the Western world has gone insane. Denmark prominently and inexplicably enjoys an immunity to this peculiar multicultural disease.

30 thoughts on ““The Greatest Threat is Islamic””