The New York Times is reporting from Lebanon on the mass trials which began today against more than one hundred “reformist figures”. 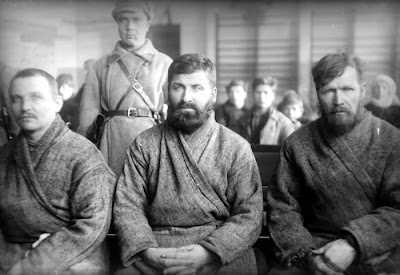 On the other hand, Stalin had things well in control. He never would have permitted the protests to go on at all. The Russian people (and the Ukrainians, the Georgians – all of the Soviet vassal states) knew there could be no dissent. But Iranians still have a living memory of freedom, and many exiles are pleading their case via new media outlets that didn’t exist in the old days. Fortunately, there is no Duranty at the Times for this regime as there was for Stalin. Which is why their report is coming from Lebanon:

The Iranian authorities opened an extraordinary mass trial against more than 100 reformist figures on Saturday, accusing them of conspiring with foreign powers to stage a revolution through terrorism, subversion and a media campaign to discredit last month’s presidential election. 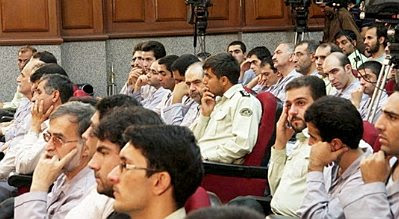 State television broadcast images of the defendants, many of them shackled and clad in prison uniforms, as prosecutors outlined the charges in a large marble-floored courtroom.

Although prosecutors have not accused the leading opposition candidate, Mir Hussein Moussavi, of crimes, they said the post-election protest movement that supports him has drawn crucial support from enemies of the state in Iran and abroad.

You have to admire the energy and dedication of the Iranian exiles as they fight long-distance for their countrymen. The protests themselves have been doomed from the beginning, but that makes them no less courageous:

Opposition leaders angrily disputed the accusations on Saturday, and Mr. Moussavi issued a call on his website, Ghalam News, [go here for some Ghalam News translated into English – D] for Iranians to resume their nightly protest chants of “God is great” more loudly than ever to show their outrage. 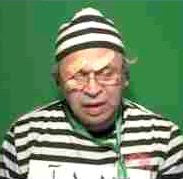 Some of the main charges seemed to come out of a confession by Muhammad Ali Abtahi, a cleric who served as vice president under the reformist government of Mohammad Khatami. Mr. Abtahi, one of Iran’s most widely read bloggers, was arrested shortly after the election, and word later emerged that he had appeared in a tearful videotaped confession. Such confessions are almost always obtained under duress, human rights groups say.

The Times is obviously having an “alleged” moment…as in “human rights groups say”. You can look at the YouTube video of Mr Abtahi (in Farsi) and see coercion written all over it. Gone are the beard and the turban. In their place is a clown outfit of black stripes with a matching cap. Would someone tell me why the authorities in Iran have that finishing touch with the cap?
– – – – – – – – –
It is supposed to be an ironic referential humiliation to his disappeared turban? Obviously they felt the need to telegraph his prisoner status by putting that striped costume on him. Can you say “Heavy Lies The Hand of the Supreme Leader”??

This is from the coerced confession (does Iran have any other kind?):

“I believe the reformists had prepared for two or three years for this election, in order to limit the powers of the supreme leader,” Mr. Abtahi said in court on Saturday, according to a transcript of the semi-official Fars news agency, which is close to Iran’s security services. Fars carried news of the trial under the headline: “The accused know election fraud to be a lie.”

Obviously the Iran government filmed the confession. Did they think that broadcasting it would convince any sane person of its authenticity or is this merely a tactic of intimidation? If so, it shows the turn this protest has taken, from complaints about the election to questions about the legitimacy of the regime itself. No wonder they’re worried about the problems their Supreme Leader (to use Mr Abtahi’s term) faces with a wide-spread angry citizenry:

In recent days, the opposition movement has focused less on the election than on those killed in the crackdown that followed it. Many prominent conservatives have also criticized the government, especially after the son of a prominent conservative figure died in prison, apparently after being tortured.

There don’t seem to be any public figures, even unofficial tallies, of the number of tortured citizens who have felt the evil hand of the ayatollahs, though there have been anecdotal gruesome accounts.

And I’m not sure what the Times means by “prominent conservatives”. Are they referring to religious leaders to the right of Ali Khamenei? Heaven forefend.

Here’s the reason, finally, for this latest circus:

But Saturday’s trial suggested that with Mr. Ahmadinejad’s swearing-in ceremony approaching, the authorities are determined to fight the opposition’s persistent claims that his new government will be illegitimate.

If there were ever a bunch of bastids, it’s the creepy tyrants behind this mess.

4 thoughts on “The CRUSHED Velvet Coup”