Today is the 18th, and as promised, the Copts put on a demonstration in Washington, D.C., while Egypt’s Mubarak was making a state visit with our top Muslophile, the one in the Oval Office.

The day before there was a fiery press conference:

What started off as a typical press conference in Washington, D.C. on the day before Mubarak’s state visit…turned into a heated exchange Monday [August 17th] when two Egyptian American Muslims challenged statements made by the Coptic Christian speakers.

At the press event, the Coptic panel, which included representatives from Voice of the Copts, National American Coptic Assembly, and Young People, decried Egyptian President Hosni Mubarak over the grave human rights situation in the predominantly Muslim country and denounced his visit to the United States. Two Muslims who joined the audience, however, took offense to some of the comments.

Both sides criticized the Mubarak administration as corrupt and said they wanted greater respect for religious freedom in Egypt. But arguments began when one of the speakers linked sharia, or Islamic law, to the kidnapping of Coptic girls in Egypt.

As tempers flared, the Christian panelists and the Muslim audience members shouted at each other as non-involved attendees sat stunned by the fiery and loud (not to mention not entirely in English) verbal exchange.

The Muslim-Christian tension as seen at the press conference reflects the complicated political and social climate in Egypt.

During the event, the two sides mostly argued over sharia which is part of Egypt’s legal system. One of the Egyptian Muslims, Ibrahim Hussein, was offended that the Christians had criticized sharia and requested the panel to direct their attack against Mubarak and not sharia.

In response, Ashraf Famelah, president of Voice of the Copts, said that he organized Monday’s press conference not to attack Islam or sharia, but to call for human rights, including the rights of Coptic Christians, in Egypt.

“We are talking about human rights,” said Famelah, an architect by profession who studied and lived in Italy for many years.

“You cannot come to me and tell me that you respect human rights when you have the second amendment in your constitution saying sharia law,” he argued firmly but with his emotions restrained, unlike other panelists.

Hussein, who spoke as an individual, and his fellow Egyptian Muslim Dr. Amin Mahmoud, the mid-Atlantic chapter coordinator of the Alliance of Egyptian Americans, informed the Coptic speakers that they were going to hold their own press conference next door the following hour to denounce President Mubarak’s visit and to advocate for human rights and democracy in Egypt.

They emphasized that their coalition, which accuses the U.S. of supporting “friendly dictators” such as Mubarak, includes Copts and Muslims alike. The two Muslims wanted to invite the Coptic Christians at the event to join their effort to oppose the Egyptian president, who has ruled the country for 28 years.

But the Coptic members firmly resisted the invitation because the Muslim men refused to talk about changing the country’s sharia law.

In Egypt, Christians live under extremely unjust laws in which they are treated as second class citizens. Up until a few years ago, Christians were not allowed to construct or fix churches unless they received a permit from the president. Even something as small as fixing the church’s faulty faucet or remodeling the bathroom would require presidential approval. The power to approve such requests was recently granted to governors, but the Coptic community has seen little improvement.

No such approval is needed for the construction or fixing of mosques in Egypt.

There has also been a rise in reports about the abduction of young Christian girls and their forced marriages to Islamic men in Egypt. The families of the kidnapped girls have filed reports with the police, but Coptic groups say security forces have ignored their requests for investigation or have even harassed the families to keep them quiet…

The demonstration itself was peaceful, full of milling adults and children holding signs:
– – – – – – – – – 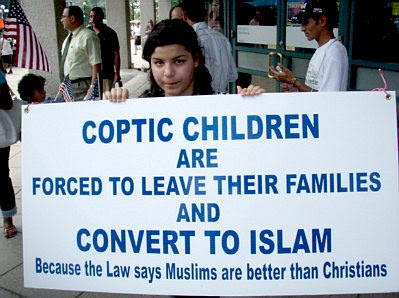 During the protest, Coptic leaders called for President Obama to demand that Egyptian President Mubarak recognize the human rights and dignity of Egyptian Coptic Christians who are oppressed in Egyptian. Speakers pointed out the ongoing oppression of Egyptian Copts, who are treated as second-class citizens, how Egyptian Copts are pressured into accepting “Islam by force,” and how Egyptian Coptic girls are kidnapped and raped. Coptic leaders called upon Americans to contact President Obama and to contact their Congressional representatives and demand support for the human rights and freedom of religion of Christians Copts oppressed in Egypt.

Due to construction in front of the White House, the Coptic protesters gathered nearby at 17th and Pennsylvania Avenue marching in the nearby area and standing on street corners to protest the continuing oppression of the Copts, which has mostly been ignored by the American news media.

And they will continue to be ignored by the American “journalists”, who aren’t interested in Christians unless they’re gun-totin’ fundamentalists. That’s why they loooove Sarah Palin, calling her the new Joe McCarthy, spending untold energy and attention in the attempt to besmirch her before she becomes too powerful for them to stop, no matter how much vitriol they spew in her direction.

The Coptic protesters passed out the following flier:

“An Urgent Message to President Obama”:

“Under President Mubarak The Copts, The First Egyptians, Are Treated As Last and Least”

“Mr. Mubarak is on a visit to the USA. At the top of his agenda is promoting peace between the Israelis and the Palestinians. We wholeheartedly support his noble mission. However, we wish to remind him that charity starts at home: The Coptic minority in his country badly needs equality, justice, and peace.”

“The Copts are the indigenous inhabitants of Egypt. Their roots entrench as far back as the country’s recorded history. Their number, according to church sources, is approximately 12 millions; about 15% of Egypt’s population. However, discrimination against them is systemic and systematic.”

– “They are deliberately excluded and marginalized. There is one Copt among the 444 elected paramilitary representatives. They are kept below a 2% cap in posts of all State organisms (judiciary, military, police, local governance, diplomatic missions, universities, etc.). Many posts are off-limits altogether.”

– “Freedom of belief is strictly a one-way street, favoring Islam. A presidential decree is required to build any church and more than 100 applications to build new churches await President Mubarak’s decision. Coptic children are indoctrinated in Islam in the Arabic language curricula, obligatory in all schools. State-owned media promote Islam and often disparage Christianity and Judaism as ‘falsified’ religions. Young Coptic girls legally under-age, are lured to leave their families, convert to Islam and marry Muslim men. Muslims, who dare embrace Christianity, are denied recognition by the State (for ‘apostasy from the final and most complete belief’) and treated cruelly by the authorities.”

– “Under Mr. Mubarak’s watch, there have been over 200 documented major attacks on the Copts that resulted in loss of lives, injuries, and destruction of churches and property. Complacent authorities often blame the victims and blackmail them to drop their complaints. Attacks have increased in frequency and severity, as perpetrators enjoy impunity and are never punished: in fact, since President Obama’s June 4th groundbreaking speech in Cairo, at least twenty major attacks took place – including burning one church and the closure of four prayer houses.”

“The list of grievances is long. The bottom line is that one fifth of the Copts have fled Egypt to seek a normal life elsewhere. The remainder must be content with a second-class status. Islam being the official state religion, and Shari’a (Islamic law) the primary source of legislation, no wonder that citizenship is viewed through a narrow Islamic prism.”

“The Annual Report of the U.S. Commission on International Religious Freedom of May 2009, states: ‘Serious problems of discrimination, intolerance, and other human rights violations against members of religious minorities (…) remain widespread in Egypt. The government has not taken sufficient steps to halt the repression of and discrimination against religious believers, including indigenous Coptic Orthodox Christians, or, in many cases, to punish those responsible for violence or other severe violations of religious freedom.’ The Commission also recommends that ‘the U.S. government urge the Egyptian government to remove de facto responsibility for religious affairs from the state security services.

“The Copts are not seeking special privileges or compensations for centuries of discrimination and persecution. They only demand internationally established human rights guarantees to live in their homeland as full-fledged citizens.”

“President Mubarak has, personally, a legal, political, and historical responsibility to act upon these flagrant wrongs.”

“We urge President Obama to raise this important issue with Mr. Mubarak.”

It’s nice to know the Muslim Egyptians hate Mubarak too, but that’s thin gruel for the long-suffering Copts.

Maybe the Copts ought to ask their fellow Christian, Sarah Palin, for help. The Magic One is useless for their concerns. Ex-Governor Palin carries a political wallop. The One carries his Teleprompters.

9 thoughts on “The Copts Pulled it Off!”