A week ago a fire broke out in an apartment building in Rinkeby, a suburb of Stockholm. Rinkeby, like Rosengård in Malmö, is almost entirely populated by immigrants, and all seven people who died in the fire were Muslims.

As a matter of interest, Rinkeby has also been in the news during the last few days as a major recruiting center in Sweden for ethnic Somalis who have been returning to their homeland to wage jihad against non-radical Muslims and Christians.

I postponed writing about the Rinkeby fire until the cause of the fire was announced. Was this the usual Enricher arson, already so familiar in the immigrant ghettos of Sweden, but taken to a new level? Or was it a tragic accident?

So far there has been no word on the cause of the fire. However, the funeral for the victims became a national media event, with major politicians making an appearance to mourn with the families of the victims.

Our Danish correspondent TB wrote us on Thursday with a brief commentary on the funeral for the Rinkeby fire victims:

Muslim funeral in Sweden (ehh… I mean what was formerly known as Sweden):

Leader Mona Sahlin and integration minister Nyamko Sambuni were present. As were police, firefighters and representatives from the municipality.

And still no news about what caused the fire.

This was all the English-language news of the event I had up until this evening. Conservative Swede just sent us this report:

As the Axess blog points out, since this was a Muslim funeral there was gender segregation, and the mourning women were directed to stand under the trees at the back.

But none of the media all across feminist Sweden remarked upon this gender segregation. Except for Dagens Nyheter (DN), which at least had a comment that — although remarkably slippery — brought up this circumstance. They indicated that one of the women motivated the whole setup, and explained that the women “understand that they cannot be allowed to be any closer to the coffins, since they are so sensitive and don’t want to disturb the ceremony with their crying.” 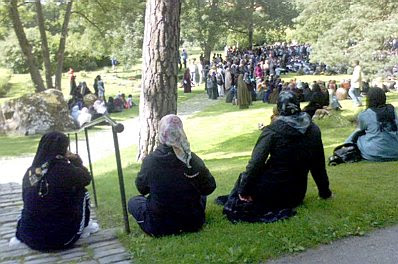 The title of the DN article is “Everybody carries the grief together”, where “together” is PC-newspeak for “separated”.

The article was written by Ulrika By, a woman. As a woman, she was directed to travel in gender separated buses to the funeral, in a bus full of Somali women. She writes about how two cultures meet, but she couldn’t have missed how two sexes didn’t meet.

How come she accepted the gender separation for herself? Did she consider herself also too sensitive and potentially disturbing to stand with the men?

Well, she got away without answering that by referring to how in our own culture we’d consider a funeral private and how she wouldn’t be “hanging like clusters” around the coffins. All right. But why did she accept the gender-separated buses?

Anyway, some credit goes to Ulrika for being the only Swedish journalist reporting honestly about this.

This event speaks volumes about our cultural climate. The elites see the injustice that they have fought against for centuries — well not really, because we never had this level of gender inequality — and not only do they not react to it, they dare not even mention it (Ulrika By being the only exception).

That is: they have no defence against Islamization and its ensuing gender inequality whatsoever!

They are actually celebrating it as the opposite of what it really is: togetherness instead of separation. At the same time, gender equality is being perfected in Sweden, targeting Swedish men. We already have kindergartens with gender-decoded toys (that is, cars and dolls are removed and the fairy tale books are altered), and the feminists are fighting for more affirmative action for women on the company boards, for more perfect gender equality.

And next we are likely to have the father forced to stay home as long as the mother with a newborn child, or half of the parental government money will be lost. And this money is very important in Sweden since it is one of the few ways ordinary people can recover some of the huge amounts of money we pay in tax.

In the liberal newspeak this is called a “individualization” of parental money, while giving the money to the family as a whole is considered to be “collectivism”. Notice that already today the father has to stay home three months with the child, or three months of the money is lost.

So putting these two realities together it’s akin to polishing the tables while the whole Titanic is in the process of sinking.

Good pictures of the funeral are found here. Photos 12 and 13 especially give an idea of the gender separation.

Esther has information on the funeral at Islam in Europe (in English).

13 thoughts on “Gender-Segregated Mourning in Rinkeby”