Our Flemish correspondent VH has compiled an exhaustive report on the upcoming installation of a ka’aba in Dordrecht, the birthplace of Calvinism in the Netherlands. VH says, “This scandal arose in June, but the project was postponed. Now it has become clear that the permit has been issued and the project will be unveiled Friday, September 4, 16:00-18:00 hrs. in Dordrecht.”

He includes his own artistic impression of a 4m3 ka’aba on the square next to the Augustinian Church in Dordrecht. What the real “artistic” ka’aba will look like is not yet known. 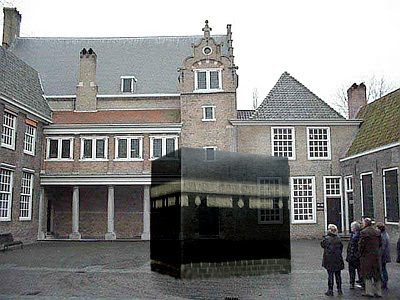 First, a translation from Reformatorisch Dagblad:

Still a Ka’aba in Dordrecht

Churchwarden Gert de Boon of the Augustijnenkerk [Augustinian Church] in Dordrecht, the Netherlands, is very disappointed that it is still planned that a work of art that shows similarities to the Ka’aba in Mecca will be revealed very near the church.

Last week Gert de Boon discovered on the website of the municipality of Dordrecht that a permit had been issued for the artwork The Mecca of Calvin. The Churchwarden delivered a petition to the Dordrecht municipality against the artwork in June this year. “If there is any place which is linked with the origin of the Dutch State, the national synod and the State Translation [translation of the Old and New Testament straight from the original Hebrew and Greek texts into Dutch], it is this location.” His petition only delayed the unveiling of the art work.

According to Gerrit Willems, director of the Dordrecht Center for Fine Arts (CBK), the aim is not to make a religious statement. “The artist wants to emphasize that values such as sobriety, self-reflection, hard work, and consideration were not exclusive to Calvinism, but could also be found in other religions, such as Islam.”[1]

The Churchwarden De Boon is disappointed that he, as a petitioner, was not told sooner that it has finally been decided that the Ka’aba will still be placed close to his church.

At the square Het Hof [see also this satellite photo], next to the historic Augustine Church in the center of Dordrecht, a Ka’aba will be built, a temporary art work by the Moroccan-Dutch Aziz Bekkaoui from Amsterdam. It is a cube of 4 by 4 by 4 meters, consisting of scaffold materials, concrete and reflective glass, and “refers to the central holy place of Islam, the Ka’aba”. The cube will cost €3000. “That money could better be used by the municipality to plant some trees on the square.”

Churchwarden De Boon calls it provocative that the work will be placed near the location where in 1618 and 1619 the Synod of Dordrecht [picture here] was held [to settle a controversy over the Remonstrants, the followers of Jacob Arminius, theological professor at Leiden University, and the teaching of Calvin and his followers — apart form Dutch delegates, there were twenty-six delegates from eight foreign countries]. Moreover, he criticizes the fact that this Ka’aba incident occurs during the Johannes Calvijn Year, to commemorate the birth of John Calvin 500 years ago on June 10, 1509. Calvin, whose real name was Jean Cauvin [in Dutch: Johannes Calvijn], had laid the groundwork of Calvinism and the (Dutch) Reformed Church.

“Calvijn wanted absolutely nothing to do with Mecca, let alone Islam[2]. This work does make this link though, which I find provocative. Certainly given the environment in which it will be built here. If there is any place connected with the creation of the State of the Netherlands, the National Synod, and the States Translation of the Bible, it is this location,” says Churchwarden De Boon.

The Churchwarden thinks that it is also offensive to Muslims. “They must travel once in their lifetime to Mecca. And now an icon of their sanctuary will be placed in Dordrecht. Mecca is the holy place for Muslims; they also will not be happy that their Mecca is misused this way.”

The unveiling of The Mecca of Calvin is planned on Friday, September 4, 16:00-18:00 hrs. “That is in the middle of Ramadan.” It will stay on the square until October 18, 2009. The Churchwarden thinks it is offensive to the church. “We have several church services, weddings and concerts here.” Moreover, the Churchwarden finds “it is far too big for the square, it will incite violence and vandalism by the [“enriched”-VH] youths, with whom we have already experienced a lot of trouble. The huge surface of reflective glass may even attract violence.” Apart from that, trucks will have so little space to maneuver that they might hit it, according to De Boon, who himself lives opposite the planned Ka’aba, and will keep the curtains closed quite often during the coming time. “But we must hope and pray that a reversal will occur in this matter.”

The artist believes that the term Mecca of Calvin should not to be taken too literally. “To me it is a concentration point.” Christians, especially sturdy Calvinists, might have serious problems with the Ka’aba as memorial for the Calvin Celebrations — Calvin himself was not too impressed with Muslims[2] and his spiritual descendants have that in common with him. […] These spiritual descendants are probably also not pleased with the idea of “a pilgrimage” object. The artist Aziz is aware of this. “I know that Calvinists do not simply opt for a pilgrimage, which is more something Catholic, or Muslim. But I hope that here a kind of togetherness will emerge, to which everyone says: ‘I am proud, I’m Dutch, I’m Calvinist. Yes, in some sense I am also a Calvinist, I work hard.’”

Only a few years ago the Muslim word was highly offended by the new Apple store in New York, even called the “Apple Mecca”, and like the much later Ka’aba in Dordrecht (plagiarism?), is made of glass. According to the offended Muslims it resembled the Ka’aba, the cube in Mecca with the Black Stone (Part of the Islamic Trinity: Allah, Muhammad, and a Meteorite).

On October 10, 2006, an Islamist website posted a message alerting Muslims to what it claims is a new insult to Islam. According to the message, the cube-shaped building which is being constructed in New York City, on Fifth Avenue between 58th and 59th Streets in midtown Manhattan, was clearly meant to provoke Muslims. The fact that the building resembles the Ka’aba, even called “Apple Mecca, and intended to be open 24 hours a day like the Ka’aba, and moreover, contains bars selling alcoholic beverages, constituted a blatant insult to Islam. The message urged Muslims to spread the alert, in hope that “Muslims will be able to stop the project.”

In 2008 a Berlin gallery had to be temporarily closed because of “an exhibition of satirical works by a group of Danish artists after six Muslim youths threatened violence unless one of the posters depicting the Ka’aba shrine in Mecca was removed.”

A few comments on GeenStijl.nl:

Still a pity that when those carpet-knotters must make art, it always has to relate to that boring, monotonous and warmed-over world of that belief. Islam in its most complicated matters still looks more like a junior-high dropout cult. If I called myself creative, I think I’d be done with it pretty soon, and put something else there besides such a dull block. [waskuip-admiraal]

Only this morning I said England will be the first European Muslim country. But the Netherlands makes a great effort to overtake the British over the left hand side. [James Lastig]

5 thoughts on “A New Mecca in Dordrecht”