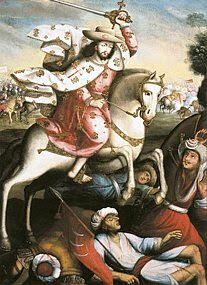 Santiago Matamoros, St. James the Moorslayer, is the patron saint of Spain and the symbol of the Reconquista. It was the spirit of Santiago that reversed the Islamic conquest of Spain and Portugal, drove the Muslim overlords out of the peninsula, and re-established the Christian kingdoms of Iberia several hundred years before the Ottoman Muslims were finally forced out of the Balkans.

For the last few years there has been a gradual and deliberate effort to eliminate Santiago Matamoros from Spanish public life. The old warrior is too non-PC, too martial, and not inclusive enough for this multicultural age.

And, needless to say, he offends Muslims.

AMDG at La Yijad en Eurabia posted an article today on the topic, “The legend of Santiago Matamoros”. Some excerpts:

As this example of abject surrender has crossed our frontiers, it is also important to let the world know about the cultural, religious and historical background of that image in order to make that shameful dhimmi behaviour even more outrageous.

Christian religion defined itself historically as apostolic. The Nicene Creed proposes “unam, sanctam, cathólicam et apostólicam Ecclésiam.” ( You may click here to hear the first documented polyphonic Credo of the Mass by Machaut ). The Church was apostolic because it was the continuation of the enterprise of the Apostles. It was not organised as a Congregationalist society (bottom up), but as an apostolic one: groups of believers under the guidance of a bishop (which means supervisor in Greek). Bishops coordinated themselves by exchanging letters and holding meetings (Councils). This naturally brought along the issue of precedence.

The Apostolic Sees were those founded by a major apostle in the most relevant cities of the Roman world. Furthermore, they were sometimes executed and buried in them. The Catholic Encyclopaedia reads:

But before heresy, schism, and barbarian invasions had done their work, as early as the fourth century, the Roman See was already the Apostolic See par excellence, not only in the West but also in the East. Antioch, Alexandria, and, in a lesser degree, Jerusalem were called Apostolic sees by reason of their first occupants, Peter, Mark, and James, from whom they derived their patriarchal honour and jurisdiction; but Rome is the Apostolic See, because its occupant perpetuates the Apostolate of Blessed Peter extending over the whole Church.

Naturally, the bishops of those four cities considered themselves above the other bishops. The Sees of Alexandria, Jerusalem and Antioquia were later on swept by the Mohammedan tide. This left only Rome and Constantinople, the Second Rome.

Constantinople is a special case. It was not a relevant city in the times of the Apostles; therefore, their bishops had to create a legend in order to take precedence above the other three oriental sees: St. Andrew would have founded the Diocese. The controversy with Rome on the precedence grew more and more bitter, and eventually led to the Great Schism — but that is another story. The important issue at this point is to understand that having the sepulchre of an apostle in a city was extremely important in ancient and medieval Christianity.

Tradition has it that the Apostle Saint James preached in Spain (with a meagre result, by the way). He then returned to Jerusalem, where Herodes executed him. The corpse was then placed in a ship that arrived at Spain. Again, a legend. From the Catholic Encyclopaedia:

According to this tradition St. James the Greater, having preached Christianity in Spain, returned to Judea and was put to death by order of Herod; his body was miraculously translated to Iria Flavia in the northwest of Spain, and later to Compostela, which town, especially during the Middle Ages, became one of the most famous places of pilgrimage in the world.

The rediscovery of the Apostle’s tomb in the Middle Ages.

The tomb of the apostle was opportunely rediscovered in the Middle Ages, according to the traditional account.

The tomb was forgotten until the year 813, when the hermit Pelayo noted lights and songs around the place. The hermit warned the bishop of Iria Flavia, Teodomiro, who after removing some weeds discovered the remains of the apostle identified by the inscription on the tombstone. He reported the discovery to King Alfonso II, who came to the scene and proclaimed the Apostle Santiago patron of the kingdom. The area was then renamed as Campus Stellae, Field of Stars, from which the current name, Compostela, has been derived.

The discovery of this tomb -whether it contained the Apostle or not- could have gone unnoticed, or could have been forgotten if it had not happened at the right moment and in the right place. The place was the north of Spain, where the Christians were rolling back the conquests of the First Jihad. The moment was the consolidation of the Asturian monarchy.

The Reconquista could not be waged under the banner of civil rights, not even as the obligation of a king to ensure the security of his subjects, as Luther naively -or maybe maliciously- proposes in The War against the Turk. A religion may be fought in the name of another religion (including an atheist religion) not in the name of religious freedom. The Apostle was the most adequate banner for the Christians in western Spain.

The appellation “Matamoros” comes from the legend of Clavijo’s Battle, where he led the discouraged Christian troops to a smashing victory against the Mohammedans. King Ramiro I defeated the troops of Abd ar-Rahman II at the Battle of Clavijo with the assistance of a knight on a white horse who fought by his side and who was considered to be the Apostle. This was the beginning of a myth that would make the Apostle the Patron-Saint of the Spanish Reconquista.

Historians agree nowadays that strictly speaking there was no Battle of Clavijo. Still, this Battle is a major event in the history of the Reconquista. What happened then? Was it all an invention?

Not really. The first mention of Clavijo is found in a twelfth-century document, long after the events. It was written by Pedro Marcio, a canon from the cathedral of Santiago, who claims to copy another document from the ninth century in which King Ramiro I makes a series of donations to Compostela as a thanks-giving offer after the battle. The document by Pedro Marcio has been subject to discussions due to its historical and chronological errors. In any case, it was taken as a truthful testimony at the time and is credited in other early histories of the Reconquista. For instance in De rebus Hispaniae, by Bishop Jiménez de Rada, in the thirteenth century.

Read AMDG’s entire article for more about Santiago Matamoros, and to find out what happened at Clavijo.

71 thoughts on “The Retreat of Santiago Matamoros”