Back in June we exposed the disturbing neo-Nazi affiliations of British Prime Minister Gordon Brown. Since then more evidence has surfaced concerning his status as a devoted follower of Adolf Hitler. 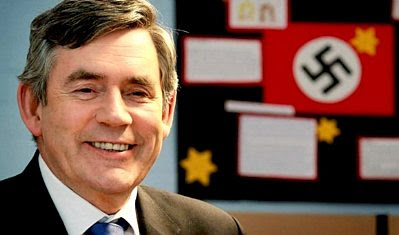 Not only is the highest elected official in the United Kingdom under the evil sway of neo-fascist ideology, but he has attempted to inject his poison into the impressionable minds of the young.

This is even worse than a cross on a bookshelf! I don’t think any rational person could help but agree that there’s at least as much damning evidence against Herr Brown as there is against Filip Dewinter.

4 thoughts on “Nazi of the Week”