The resurgent neo-Nazi ideology is becoming ever more widespread.

Many of our readers will be surprised and shocked to learn that neo-fascism has penetrated even the hitherto sacred precincts of the Democratic Party. And the new ideologues are not just ordinary ward-heelers. This isn’t any common block warden or bagman — this is a high-ranking leader of the national party!

Who would have thought that this particular leader would ever succumb to the siren lure of Nazi ideas? But here it is, incontrovertible photographic evidence of not just one, but at least five separate occasions when the vile fascist salute was used to rally the faithful at party meetings and campaign events:
– – – – – – – – – 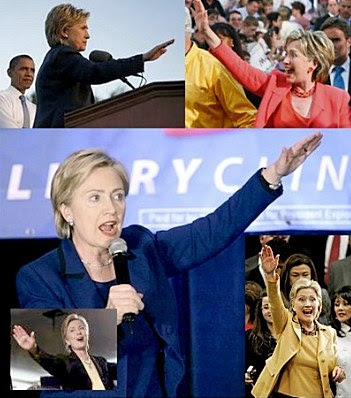 Yes, it is she: Obersturmbannführer Hillary Rodham Clinton, saluting the adoring throngs of Hillarenvolk at several recent party events.

It’s obvious by now that neo-fascists can emerge anywhere and everywhere. It is our duty to expose them wherever they may be found.

7 thoughts on “Nazi of the Week”