Our Flemish correspondent VH has translated an article from Elsevier about the recent imposition of halal meals on all inmates held in many Dutch prisons. The interesting thing about this story is that a prisoner of Dutch ethnicity is leading the legal battle against the Islamization of the prison system:

In ‘many’ of Dutch prisons there will be only halal food on the menu. Justice has closed advantageous contracts with suppliers that only deliver halal food. 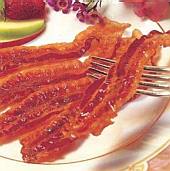 Serving two menus would become too expensive, the newspaper De Telegraaf writes today. Prisoners can get ritually slaughtered cattle or sheep, or nothing. Pork is not on the menu, because it is unclean meat according to Muslims.

Lawyer S. van Berge Henegouwen has filed a lawsuit against the prison in the city of Sittard [in Limburg, in the southeast of the Netherlands], because his client complained about the forced halal menus. “My client does not want religion forced upon him, he just wants a meatball.” The lawyer insists that his client must be paid 25 euros per halal menu that he gets presented. The Ministry of Justice reported after “intensive research” in the prison in Sittard that there will be pork back on the menu immediately.

Sietse-Fritsma, member of parliament for the PVV, calls for a halt to “the umpteenth sad example of the Islamization of society.” “It is known that the Dutch prisons are overcrowded with Muslims, but that of course does not mean you must present all of them meat from ritually slaughtered animals”.

One thought on “Halal Food is Compulsory in Dutch Prisons”