Our Danish correspondent TB has translated an op-ed by Søren Espersen from Friday’s Politiken. Of Mr. Espersen, TB says, “He is a proud member of parliament for Dansk Folkeparti (Danish People’s Party) and a true clone of Holger Danske.” 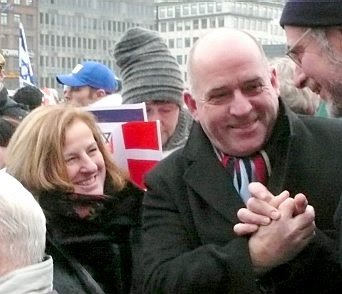 Assimilation shouldn’t really be a shameful word, but something that we can demand of immigrants, writes Søren Espersen.

While I worked on my book The Israeli War of Independence and the Danish Volunteers I had a huge pile of private letters lying all around me — the letters which the volunteer soldiers had send home to their relatives and friends in Denmark.

Most of these volunteers were second- or third-generation immigrants — children or grandchildren of extremely poor Jewish immigrants who came to Denmark in large numbers from Russia, Ukraine, the Baltic area and Poland.

Their parents or grandparents had clustered in and around areas where cheep apartments where available — in those days that was in the most miserable part of inner city Copenhagen slum districts — Adelgade, Aabenraa, Borgergade, Prinsensgade, Landemærket — and Nørrebro.

These apartments were old and neglected. The courtyards were narrow and evil-smelling. Only a small amount of light could reach these second or third courtyards. The young people who were the product of these miserable conditions observed the Shabbat and the Jewish holidays; they ate according to Jewish eating traditions — the kosher rules — although they were not always good about visiting the synagogue. Usually the language they spoke in their homes was Yiddish.

A few years later, a doctor from Rigshospitalet [The main hospital in Copenhagen] who was in contact with these kids from time to time told the author and priest Paul Borchsenius how surprised he was to see such incredible poverty:

“The kids were lying on piles of old rags and carpets instead of beds — usually they were full of fleas. It was horrible to experience how poor people can actually be. Also I was surprised a few years later when I watched how quickly most of these Jews worked their way up. After a few years many of them where in a better position than the educated Danish workers”

Wrote a fine and elegant Danish

Indeed it was a surprise to everyone how quickly these working boys, apprentices, tailors, shoemakers and hatters were able to take care of themselves — and after few years, in general, they were able to establish themselves in a good job or maybe even own their own company. But first and foremost these young people had become Danes — and not the least Copenhagen Citizens — with a ‘capital C’.

The first thing that struck me when I started to read these letters was that each and every one of these letter writers wrote a fine and elegant Danish. A fine handwriting indeed! No misspellings, mostly no comma errors [Translator’s comment: That is incredible since almost nobody can do that. The comma rules in the Danish language are very difficult. As I remember it only around one percent or less of the Danish population can actually write Danish and use the comma rules correctly]. And we are talking about kids who left school after seven years at the most.

Young immigrants who had grown up in miserable apartments in second or third backyards in Nørrebro. It was not like they had forgotten their Jewish lives because they kept on with that. And with great interest.

They established multiple Jewish associations — unions of craftsmanship, sports clubs, youth associations, singing and theater associations — where they met and found common ground around their Yiddish songs and the traditions which were theirs.

From these letters from the Jewish soldiers shines a huge amount of love for Denmark and the Danish people, whom they have become part of. And which they were proud of being a part of.

Yes, of course they fought in Israel, so that the Jewish people, whom they were also a part of, could have a spot of their own, where Jews did not have to be persecuted, but that was not a fight for themselves in Denmark — that fight was for fellow Jews in all the other countries. As for themselves they were busy to get back to Denmark to continue their Danish — and Jewish — lives.

For these immigrants had indeed allowed themselves to be assimilated!

Not for a second did they plan to stay in those lousy apartments in inner Copenhagen and Nørrebro to be squashed together with other Jews. No, as soon as they got the possibility, their dream was to get a light, airy house with a small garden in Amager, in Valby, Østerbro — or maybe even further north in the upper class district located on Strandvejen.

Nor did they expect Danish society to change so that it would fit better with Jewish habits and traditions.

If they, as apprentices, were lucky enough to get a Jewish boss they were allowed to get off work on Shabbat, but if they had a Christian boss, well, then they worked on Saturdays as well, cause that was the way one did it there.

The pupils in the Jewish School, Carolineskolen, were quickly made aware of what they had to expect from the program of the day — Danish, Danish, and Danish! Of course you could chat with each other in Yiddish on your way to school, but at the moment you entered the gate at the school you started speaking Danish. The Jewish guard took care of that. Actually, you got a slap in the face if you spoke Yiddish on school property — break or no break.

The parents gave their kids some clear and unambiguous messages: Become Danes! Speak Danish without that foreign accent that we unfortunately cannot get rid of. Get yourself an education, so that you can advance in Denmark and become a respected citizen in this country that is now ours. Honor your father and your mother. Honor the Jewish people and honor Denmark. Do your duty to this country. Ask what you can do for you new country. In short: Assimilate!

From their parents they were confronted with some inexorable, personal demands. And they demanded a lot of themselves as well.

On the other side there were no demands from the immigrants about anything, about how Denmark and the Christian Danish people should adapt to them!

At no time did they demand that Danish public schools should be teaching in their mother tongue; Yiddish. There were no demands about special arrangements to accommodate them with respect to the school calendar.

There were no demands on special arrangements in the working places — or on the citizens using the institutions of the surrounding society — to eat meat slaughtered in a specific way.

There were no demands whatsoever that the Christian part of the Danish people should learn a lot about Jewish traditions or study the Jewish law system, so that we should better understand these newcomers.

So, it was not Denmark who faced a task. It was the immigrants.

The pupils at Danish public schools were not granted permission to stay home on Jewish holidays; Pesach, Rosh Hashanah and Yom Kippur.

At no time did society feel an urgent need to establish an army of social workers, immigrant counselors or integration workers with the single purpose to educate the Danes how to act towards these new arrivals.

It was not Denmark which had a task.

It was the immigrants who had a task.

Originally, assimilation is an expression from medical science that means ‘to equalize with’ or to ‘absorb’ or to ‘integrate’. In medical terminology it is about how nutrients are being absorbed and transformed to become part of the organism. The organism needs nutrition.

But it worth to pay attention to the fact that it is the nutrients that need to be absorbed in the organism — not the other way around! In today’s debate about immigrants assimilation has become almost a taboo. And I really never quite understood why.

In the name of peace, security and tolerance it is exactly assimilation that we should demand of the foreigners who — here 100 years after the major Jewish immigration — have started to pour into the country.

To the first, second, third, and soon fourth generation of immigrants I will say this: You are welcome in Denmark. But I have a clear message for you: Assimilate — or find another country…!

State and municipality, along with hundreds of treating beau-esprits, using the most low-browed, solemn and empty phrases have been competing for years to see who can be most self-effacing, submissive, humane, and considerate.

Not towards the Danish people. But towards people from all the other nations in the world. Instead of demanding that the foreigners assimilate. The natural demand, which only a few of present-day immigrants demand from their kids. On the contrary, many demand the opposite.

In recent years we have seen that the authorities have started to ‘resaddle’ — to state demands. It is not an easy transformation for the apparatus of public officials who have been brainwashed since 1983 [when the catastrophic immigration law was implemented] to try to make the Danish people change — instead of the foreigners.

But why should it take so long before the matter of course became obvious? Think about all the troubles this country could have avoided.

Think about how much Denmark and the Danish people could have been spared from!

We are in the process of normalization

And even though The Danish People’s Party cannot be blamed for one second for the situation the country is now in, it is nevertheless we, together with the government, who have to clean up. We are working on it.

But we have only just started. The task that we have taken upon ourselves is to normalize the conditions in Denmark. To normalize. It does not sound that extreme, does it? — no, but it is worth underlining that it is normality we are on the way back to when talking about immigration politics in this country.

It is the abnormal — chaos — that has been ruling in our country since that catastrophic immigration law of 1983. What we are now seeing is that Denmark is in the process of being normalized.

Normalization is to get both your feet back on the ground again. After 25 years of abnormality Denmark is little by little finding her own feet again.

When, after 25 years, you rediscover your legs and start to feel that they are strong enough to carry you, a lot of positive psychiatric side effects follow.

Suddenly you are able to seize the day. To set the agenda. To be where it happens. And we, the Danes, become proud when that is where we are!

When we are being threatened by men from the Dark Ages it is only because they cannot tolerate our freedom.

If we were in chains or kneeling, nobody would want to waste their energy threatening us. As hated as we are in these medieval countries — equally loved and admired are we in the free world. Just think if it was the other way around…!

Mimi Jacobsen [irrelevant former Danish MP — translator] talked a lot about “exporting Danish values” — and Poul Nyrup Rasmussen [former Danish prime minister and Social Democrat who from the chair in the parliament once stated concerning the Danish Peoples Party: “No matter how hard you try you will never become house-trained.” — translator] talked a lot about Denmark as a pioneer country. Both have now succeeded!

But then again; they are gone from politics… let us just say that in these years there are good reasons for us to be proud of being Danes.

Let’s straighten our backs and acknowledge that our small country is now a pioneer in Europe.